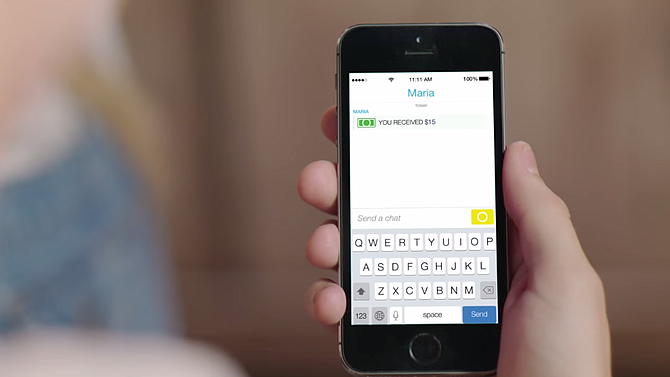 Mobile payments service Snapcash is another move into a cashless world. (Courtesy Snapchat)

Boon: Anyone can be a paid recruiter through Boon’s job marketplace. Founded in July, the Culver City platform credits members for successfully referring people in their professional network. Boon promises to reduce hiring costs for businesses by 75 percent. It’s looking to raise $1 million during its private beta.

JusTagMe: More ice bucket-like challenges could be on their way. JusTagMe has released a Facebook-integrated platform that gives users the opportunity to launch their own charity campaigns on the social media site. The app comes from West Hollywood's Darelicious. Read more here.

Radical.FM: The Venice music streaming service has launched a browser version of its mobile app. The self-adjusting browser includes features such as album art for stations and the ability to scroll back through songs in a listener’s play history. Radical, which has 30 million songs in its library, offers curated recommendations based on a user’s preferences. It also compensates artists for every stream.

Snapchat: The ephemeral messaging app unveiled a major update to allow for peer-to-peer mobile payments. Users can access Snapcash through the Venice app’s private chat windows, where they can send money after typing in the dollar amount. Snapcash is powered by San Francisco financial service app Square, which handles the transactions. Read more here.

VentureLab: The startup studio said it wants to take a more hands-on approach with its startups compared to what’s offered by other incubator or accelerator programs. It’s interested in early-stage startups with valuations less than a few million dollars. Currently located in Hollywood Hills, VentureLab plans to move to Pasadena next year. Read more here.