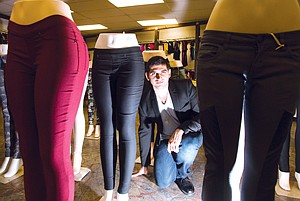 Shlomo Meiri is betting that his Montebello e-commerce startup, Le Jolie, will be able to hold its own against online shopping giants such as Gilt Groupe and Zulily.

And not necessarily by offering lower prices or better selection. Instead, Meiri plans to compete with something else: financing. Generous financing.

The recently launched company lets shoppers get designer goods now, with only a down payment and a promise to pay the rest later.

The interest rate? Zero. Fees? Zero. That’s a deal Meiri hopes will be too good to pass up, especially for such designer brands as Louis Vuitton, Gucci and Balenciaga.

“I saw what Gilt did and from them I copied how they discounted merchandise 30, 40, 50 percent off,” he said. “But they didn’t have the formula of financing.”

Other e-commerce sites want 100 percent of their money before an item is shipped, but Le Jolie’s customers can shell out as little as one-quarter of a product’s price upfront and pay off the remainder over a few months. Le Jolie will ship the item after the first payment is received.

That’s a big risk, as a customer could make only the first payment and skip out on the rest. But Meiri said he’s not worried.

He purchases his wares wholesale, either directly from vendors or through his contacts with dealers. He said he gets such low prices that he can at least break even and sometimes make a profit if a customer makes only the first payment.

“It sounds like one of those crazy models that’s just too good to be true,” Knapp said.

Meiri and his son, Adie, co-founded Le Jolie in September with a staff of 12. They work out of a warehouse near downtown L.A.’s Fashion District and have a 300,000-square-foot fulfillment center in Montebello.

The elder Meiri got his start in fashion decades ago, co-founding a clothing manufacturing company that grew to about 300 employees fulfilling orders for major department stores. But in 2000, he suddenly quit and asked his business partner to buy him out.

“He thought I was crazy,” Meiri said. “But I don’t think there is any business more frustrating than manufacturing. When I was younger I had the patience to fight and argue (over orders), but I couldn’t handle it anymore.”

He spent most of the past 14 years developing real estate, but now he’s back in the fashion business.

Le Jolie makes its money by selling designer goods, which are discounted 30 percent to 60 percent from retail. Of course, the market is already flooded with sites offering consumers similarly discounted merchandise – so much so that even more established companies are struggling and trying to consolidate.

For example, online flash-sale site Rue La La in Boston was reported this summer to be exploring a sale and online retailer Ideel in New York, formerly Ideeli, was purchased by Chicago’s Groupon in August.

But Meiri thinks his payment program – he calls it Flex Pay – gives him a leg up on competition. And Steven Mednick, associate professor of clinical entrepreneurship at USC’s Marshall School of Business, said the program makes sense. He likened it to how car dealers will offer various payment plans to entice consumers.

“It absolutely makes sense because your point of differentiation is in financing or pricing,” he said.

If customers choose not to not fill out a credit application, they can finance a purchase of up to $300, minus the first payment. For instance, a customer could buy $300 sunglasses, paying about $100 upfront and then spreading the remaining $200 over two, three or four subsequent monthly payments. Those later payments are made automatically with the credit or debit card the customer used for the initial payment.

Once the balance is paid, Le Jolie gives the customer an additional $50 on their purchase limit, so the next time they can buy something worth $350. The credit limit keeps going up as long as the customer makes purchases and pays them off in full.

However, if customers do fill out a credit application – which asks for Social Security number, annual income and employment status – they can finance larger purchases right away.

Regardless, items are shipped to the customer after their first payment. The first payment, the one customers have to make to get their shoes or sunglasses, pays at least half – and often all – of Le Jolie’s cost.

Meiri said that’s why he’s comfortable shipping the product after the first payment. Even if customers stop paying after that, he’s usually able to make a profit, even if it’s nominal.

Furthermore, he pointed out that his get-it-now, pay-later program has an initial spending limit of just $300.

“If you already have a credit card, that means you have credit,” he said. “People are not going to ruin their credit for $300.”

Still, he expects about 18 percent of customers will fail to make a payment at some point. When that happens, customers are charged a $10 fee for each missed payment.

Defaults aren’t Le Jolie’s only potential problem. Ilse Metchek, president of trade organization California Fashion Association in downtown Los Angeles, said creating a discounted clothing site isn’t a new concept but one that can be problematic as high-end labels are very picky about where their items are sold.

“The proliferation of unauthorized discount merchandise is becoming quite a legal battle everywhere,” Metchek said. “It is called the grey market. The source is usually questionable, particularly if it is current branded merchandise.”

But Meiri said he ensures each item is authentic and only deals with authorized dealers or brokers, who purchase an overstock of a brand’s clothing at a steep discount and then resell it to retailers. Those items tend to be out of season or a few seasons old by the time Meiri and other discount sellers get them.

What’s more, while Metchek said big brands might not like seeing their wares on Le Jolie or other sites, there’s little they can do about it as long as retailers are acquiring products legally.

The more immediate concern for Le Jolie is competition from bigger outfits such as Gilt, Marshall’s Knapp said.

“Gilt, Rue La La and Jack Threads, they have invested tens if not hundreds of millions of dollars in their web development and customer acquisition,” he said. “So, he’s heading into a very competitive market space.”

But Meiri said he’s confident his website will be able to compete with the heavyweights, thanks to his financing model.

“I invested over $5 million of my personal money,” he said. “I wouldn’t have put in so much of my money if I didn’t feel confident.”