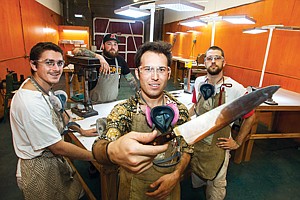 Work in a restaurant kitchen long enough and you will hear the phrase: “The knife is an extension of your hand.”

Now, a growing number of chefs are willing to pay top dollar to take that notion to the next level, and some are turning to Aura Knifeworks, a Signal Hill company founded by 22-year-old tinkerer Noah Cowan.

He’s building a cult following by making $1,000 knives that are custom fit to the shape of a chef’s hand. Cowan started selling his wares three years ago out of his parent’s Long Beach home, where he still lives. But through word of mouth his company has expanded, and last month Aura moved to its own warehouse and hired two full-time employees.

“No one has really questioned the knife before so I don’t have a lot of competition for what I’m doing,” Cowan said. “You want your knife to be a part of you. This knife, it fits like a glove rather than a mitten.”

Aura is a tiny business – it sold its 100th knife last month – but its knives have earned testimonials from celebrity chefs, and the company is striking a chord at a time when cooks are keen on personalizing and specializing every aspect of their craft, said Jill Bosich, a chef instructor in the culinary program at Orange Coast College in Costa Mesa, who had Cowan as a student.

Over the past few years, Bosich said, chefs have taken to using tools from Home Depot and art stores in the kitchen. Her own tool kit contains several pair of tweezers, the kind you would buy at a beauty supply store.

“When there is something delicate, like a little sprig of a dainty herb, I don’t want to grab a pair of barbeque tongs,” she said. “It’s not just about walking into Williams-Sonoma anymore.”

Cowan’s knives are just the latest example of that trend, applied to one of the trade’s most basic tools.

Luna Barone, a chef at Joe’s Restaurant in Venice who said she uses her Aura knife 16 hours a day, called it the ultimate realization of the individuality chefs strive for.

“Chefs make it a point to be different but your personality as a chef is not reflected in the normal knife,” she said. “To me, a blade is a spirituality. It’s the connection between my soul and my art.”

Cowan’s obsession with personalization began when he was 17 and working as a chef’s apprentice at the Hyatt Regency Long Beach. Frustrated that he could not find a knife with a turquoise handle, he created one and attached it to his favorite blade.

Soon, friends were coming to him with their own knife requests. Charging them only the cost of materials, he customized their tools out of a tent in the backyard of his parent’s home. He continued to modify his knife, eventually creating one that fit his grip but might feel awkward in the hand of anyone else.

He incorporated Aura in 2012 with the help of a $10,000 loan from his grandfather – given in place of a semester’s college tuition.

When a customer places an order, Cowan ships out a clay fitting kit. The customer grabs a clay block as if it were a knife, leaving an impression that is distinct to the shape of the chef’s fingers and the way they hold the tool. The mold is then placed in a 275-degree oven for 10 minutes. Once it cools, the customer ships it back to Cowan.

Using a dentist’s drill, Cowan carves a wooden knife handle until it matches the clay mold. The handle is then sent to an Arizona company that soaks the wood in resin to finish it. Cowan then attaches a blade made of high-grade carbon steel.

More often than not, if the chef is local, Cowan will hand-deliver the finished creation.

Cowan graduated from his parent’s backyard last year, moving into a cramped corner of a friend’s warehouse space in Santa Fe Springs. He listened to audiobooks about business and marketing during his daily 20-mile bicycle commute along the San Gabriel River.

Taking cues from the audiobooks, Cowan began giving away free customization kits once a month to prominent chefs who could bring him a week’s worth of orders with a simple Facebook mention. Jeffrey Saad, host of Cooking Channel series “United Tastes of America” and owner of Studio City restaurant La Ventura, is among the knife’s influential fans. (Cowan posted a YouTube video of Saad gushing about his Aura knife.)

“The thought and care we put into each knife creates ambassadors in what is arguably the most social of work environments,” Cowan said.

Cowan’s two other full-time workers are longtime friends: Teddy Ryan, 22, and Noah Gordon, 23. They’re paid $900 a week and each own 1 percent of the company. Aura also has three part-time workers who are currently unpaid, including Chris Rubinstein, 34, a former senior sous chef with Levy Restaurants at the Staples Center, who “understands the market,” Cowan said.

In early October, the Aura crew moved into an 1,800-square-foot warehouse in Signal Hill and stocked it with new tools and machinery. True to form, they built the work tables themselves and carefully mapped out the space in hand-drawn 3-D images.

With Aura settled in its new space, Cowan is already looking ahead to another expansion. Lately, he’s been spending time in San Francisco, schmoozing with potential angel investors, though he said he needs to find the right one – someone who understands, for instance, that Aura’s knives take time to make and can’t be sold on the cheap.

“Raising money is like dating,” he said. “I’m looking for the right strategic investors who understand the vision.”