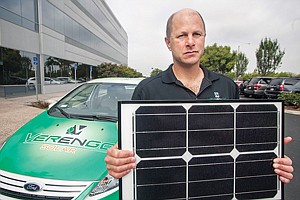 Verengo Inc.’s search for a buyer might show that solar panel installers could use more energy on the financing side of their business.

The Torrance company, which specializes in residential solar panel installation, has hired Bank of America Merrill Lynch to explore a sale of the company, according to a March document obtained by the Business Journal last week. Analysts believe that Verengo executives fear getting eclipsed in an industry trend in which solar installers are consolidating with solar financing companies.

Solar power companies that offer all services in-house have climbed to the top of the industry. The top two companies, SolarCity Corp. of San Mateo and Vivint Solar of Provo, Utah, which offer installation, sales and financing, have nearly 35 percent of the market combined.

Privately held Verengo is the country’s third-largest residential solar energy installer, with about 5 percent of the market.

But unlike the two bigger companies, Verengo only provides sales and installation. It relies on partnerships with third-party companies such as Sunrun Inc., a solar power company in San Francisco, to provide financing for installations through leasing and power purchase agreements with consumers. So it’s likely that Verengo is seeking a merger with a company that can provide in-house leasing services.

Nicole Litvak, a solar analyst at GTM Research in Boston, said that it’s tough for installation-only companies to make much of a profit because they have to sell the equipment to a financing partner, who then controls the price.

At least two installation companies have already been acquired by financing companies this year.

“We have been seeing a lot of merger and acquisition activity and I think it’s a matter of the leading solar companies trying to figure out what the best business model is for residential installation right now,” Litvak said. “It’s still a very young industry. … Companies will start to change the model. Sunrun acquired installer companies and pure installers are trying to become a company like SolarCity.”

With that wide geographic reach, Verengo could be an attractive purchase by a large company such as SolarCity or a small startup looking to become vertically integrated, according to Conor McKenna, managing director at the Century City office of Reznick Capital Markets Securities who has worked on more than $1.5 billion in clean energy projects.

“You’re not buying assets; you’re not even buying revenue stream; you are buying the opportunity to use your product with their footprint,” McKenna said. “It’s not a high-margin business. You get squeezed by customer, buyer and equipment suppliers. So what you are buying is the potential to expand.”

Solar panels have taken off nationwide as customers seek to lower their utility costs. Last year, solar panels were installed in a U.S. home or business every four minutes, according to GTM, which specializes in tracking clean energy companies. The firm estimates that could increase to one project every 80 seconds within the next two years.

Randy Bishop and Ken Button co-founded Verengo in 2008 after their window installation business struggled at the onset of the recession. Investors include L.A. private equity firm Angeleno Group and ClearSky Power & Technology Fund, the venture arm of NextEra Energy of Juno, Fla. NextEra declined to comment. Angeleno Group and Bank of America Merrill Lynch did not respond to requests for comment.

Verengo sells and installs solar panels on homeowners’ rooftops. The cost of the panels is based on how much wattage produced. Verengo has alliances with financing companies that typically offer the customers 20-year leases or other types of contracts.

Neither of those companies disclosed the sales price of the acquisitions and Verengo’s documents don’t include an asking price.

Pavel Molchanov, an analyst at Raymond James Financial Inc. in St. Petersburg, Fla., who follows public clean energy companies such as SolarCity, said the growth of the market should make Verengo an attractive purchase.

“I have no doubt that if Verengo wants to sell itself, it will find a buyer,” Molchanov said. “It’s a question how high the price tag would be.”