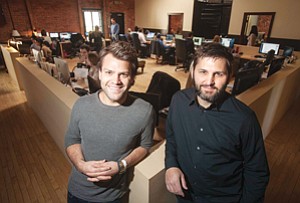 Rounding Into Shape: Co-founders Zach James and Rich Raddon at Zefr’s office in Venice in a January 2013 photo. Photo by Ringo Chiu.

When online consumer rewards site Swagbucks last week took its first outside investment, a $60 million infusion from Palo Alto’s Technology Crossover Ventures, it was the latest indication that L.A.’s booming tech industry is coming of age.

Not only has the amount of money pouring into local tech firms surpassed sums raised at the same point last year, Silicon Beach is getting far more attention from the top tier of Silicon Valley’s venture capital community.

L.A. information tech companies have raised more than $620 million in roughly 50 deals thus far this year, according to data collected by SoCalTech.com. That’s 78 percent more than the amount raised at the same point last year. And it’s more than any other comparable period since Silicon Beach was more or less established in 2009.

Exits are healthier, too.

Sixteen local tech companies have been acquired or gone public this year, reaping more than $1.7 billion. That number could spike much more if Apple Inc.’s rumored $3.2 billion purchase of Santa Monica’s Beats Electronics goes through. The deal flow does not include some private transaction for which terms were not disclosed.

Venture firms in Silicon Valley expect companies they invest in to make billion-dollar exits, Chen said, and their interest in investing in the L.A. market reflects a growing confidence that their goals can be achieved here.

The activity is a reflection of the increasing credibility and viability of businesses being built in the region, said Rod Werner, managing director of City National Bank’s tech and venture capital banking group in Palo Alto.

“You’re definitely seeing the top firms come in,” Werner said. “People who were skeptical of that market in the past are saying, ‘Let me look a little closer.’ ”

Those bets are being confirmed, in part, by the size and number of exits that have been seen this year.

By this time last year, just six companies had been sold, with DreamWorks Animation’s $117 million purchase of another multichannel network, L.A.’s AwesomenessTV, the only one in which terms were disclosed.

Nearly three times as many deals have been struck this year, with Walt Disney Co.’s March purchase of Maker Studios leading the pack. The Culver City YouTube multichannel network could bring in $950 million from the deal if all benchmarks are met.

SoCalTech.com editor Benjamin Kuo said the region should be encouraged by recent trends.

“I think the number and size of the exits speaks very positively to Southern California’s ability to continue to produce very valuable startup companies,” Kuo said in an email.

Werner noted that tech companies with revenue models built around content are garnering particular interest, owing to L.A.’s deep-rooted knowledge base in all things entertainment.

These businesses, such as multichannel networks, or MCNs, offer large media companies access to a whole new consumer base.

And buyers are certainly not in it for the YouTube ad dollars.

“If they can drive more unique users to their site,” Werner said of the studios’ desire to move eyeballs away from YouTube, “then they can generate revenue from them.”

After the Maker deal, rumors were swirling that rival multichannel network Fullscreen, which received $30 million in Series A funding last year from Chernin Group and Comcast Ventures, among others, is also on the market and looking for a Maker-size payday. Recent reports have named Time Warner, Yahoo and Relativity Media as suitors for the Culver City company.

Also in March, West Hollywood’s Machinima raised $18 million from a group of investors including Warner Bros. Entertainment and Google. Not to be outdone, Culver City’s Collective Digital Studio raised an eight-figure round from German media conglomerate ProSiebenSat.1, reportedly in exchange for 20 percent of the company.

Chen said this spate of deals has also had a ripple effect on smaller YouTube networks that produce content for a narrower audience base.

“Newer emerging MCNs focused on niche content verticals have all seen an increase in investor interest and activity” over the past few months, he said.

Though it garners a lot of local attention, entertainment tech isn’t the only sector generating buzz and attracting investment.

“We see this as a great year for L.A. tech investment, and the round we’ve just taken from TCV is a great step in that growth,” said Davis, who previously served as chief executive at Fandango and Shopzilla, both located in Los Angeles. “It’s exciting to see how this market is maturing rapidly and attracting more investor interest from all areas.”

If anything’s putting a damper on the enthusiasm, it is concern that the market for tech IPOs might be pulling back.

After peaking above $20 a share in the weeks after its $450 million IPO, Playa Vista’s Rubicon Project has settled in below its offering price of $17.50.

Werner said inflated valuations coupled with the rocky performance of tech stocks over the past few weeks is causing companies to hold off on public offerings.

“We are seeing companies rethink their IPO exits this year,” he said, noting the recent decision of Los Altos cloud storage firm Box to delay its IPO as evidence of a trend that stretches to Southern California.

Among those in the wings is Santa Monica auto shopping website TrueCar Inc., which registered its $125 million initial public offering with the Securities and Exchange Commission in April. It has not indicated any delay in its plan.

Chen explained that many tech companies are opting to stay private much longer than in the past.

“When they go public the frank reality is that a lot of the value creation in the business has already been done” during investment rounds, he said.

Another recent phenomenon is a decision by traditional asset management firms such as Fidelity, T. Rowe Price and BlackRock to invest in tech startups – Pinterest, Box and Dropbox are examples – before they go public, though he noted such investments represent a tiny fraction of the assets they manage.

New York hedge fund Coatue Management, which typically invests in public equity markets, was an investor in Snapchat’s Series C financing round in December, which valued the company at $2 billion, according to New York research firm CB Insights.

“The last time I saw this kind of activity happen was back in 2007,” Chen said. “It indicates to me that IPO investors are having to secure a position in interesting eventual IPOs early by investing in these companies while still private, and they may be doing this to seek a higher overall return from the investment beyond what the IPO alone could generate for them.”

Because late-stage companies are garnering such high valuations, Werner said many venture firms are starting to get in early before they’re priced out of the market. For that reason, seed funding probably won’t dry up anytime soon.

“We’re seeing a lot of investors come in earlier now,” he said. “The health of the community is the startups.”