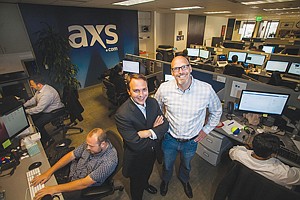 AXS started out by selling tickets for events at AEG venues such as Staples Center. The company has also sold tickets in venues where its AEG Live division produces concerts. The division does nearly half of its business abroad, where ticketing deals go through promoters.

Now, three years in, the company is trying to lock up contracts with non-AEG venues – similar to the one it signed last year with the Gwinnett Center near Atlanta – a deal it took from Ticketmaster.

The question is how much business it can win in other highly competitive bidding contests as it expands from AEG properties.

“We’re starting to turn our attention to selling to third-party clients,” said Bryan Perez, president of digital, tickets and media at AEG. “We had to start with our buildings first, since that was a big part of the initiative and gave us critical mass.”

AXS handles ticketing at dozens of AEG venues. The company is also handling ticketing at non-AEG venues for events such as an upcoming Railroad Earth concert at Red Rocks Amphitheater near Denver and a Real Madrid soccer game at the Cotton Bowl in Dallas. Those venues don’t have exclusive ticketing deals – they allow promoters to bring in their ticketing firm of choice.

But the goal of AXS is to make more exclusive, years-long deals with venues, as it did with the Gwinnett Center, which hosts events such as the Southeastern Conference women’s college basketball tournament.

AXS makes money by charging a venue a set amount or a percentage of the surcharge on each ticket. The company also makes money through other offerings such as website design and marketing on behalf of venues. The online features are essential in AXS’ pitch to venues, said Tom Andrus, senior vice president and general manager at AXS.com.

Live Nation did not return a call for this article. In its most recent earnings, Live Nation said Ticketmaster has a net renewal rate with venues of “over 100 percent” this year. Ticketmaster had an operating profit of $102 million last year. Revenue was $1.4 billion, up 2 percent from 2012.

AXS is profitable, executives said, though they would not disclose specifics or how much it charges in per-ticket fees. AEG is privately owned by billionaire Philip Anschutz.

Besides Staples Center, AEG owns a number of venues including the StubHub Center locally and Manchester Arena in England. It also owns several sports teams including, locally, the Los Angeles Galaxy, 50 percent of the Kings and a portion of the Lakers.

AXS got started after Live Nation’s 2010 acquisition of Ticketmaster, when the Justice Department encouraged AEG to start a ticketing business to prevent a monopoly.

AXS launched in 2011, filling the company’s long-running desire to control ticketing at its venues and build a brand that consumers would recognize.

“We all thought it was important to have a marketing channel that helped promote and drive ticket sales,” Perez said.

Part of the idea was to offer new features to make buying tickets online easier. One is an online waiting room, where people can enter their billing information before tickets for high-demand shows go on sale. Buyers are then randomly selected.

The division’s focus thus far has been on ticketing concerts and other live shows, since Ticketmaster is a formidable opponent in sports. For example, ticketing for the Clippers and Lakers is still handled by Ticketmaster, even though the teams play their home games at AEG’s Staples Center. In such cases, Ticketmaster and AEG work as partners with a shared interest in selling out games. But AXS is now actively trying to switch the teams over to its system. The division already handles ticketing for the Kings.

Another focus for AXS has been trying to build a brand that has good standing with consumers – something that has never been easy for Ticketmaster, or any other ticketing company, since they often are criticized for high ticket surcharges.

Part of building the AXS brand came in a 2012 partnership among AEG, Creative Artists Agency, Ryan Seacrest Media and Mark Cuban to launch AXS TV, a cable channel that televises live events such as concerts and operates independently from the ticking company.

The ticketing company has also made efforts to broaden its business. Last month, AXS launched an entertainment news feature on its website that is intended to spur interest in events such as the New Orleans Jazz & Heritage Festival, which was the first event covered on the site. The writing is done by freelancers.

The company’s staff of engineers, customer support, sales and other workers has also grown to about 240 people, up from about 40 when the company launched. Andrus said the company is growing on all fronts.

“As we roll things out, we’re in a situation where each month is better than the previous month,” he said.