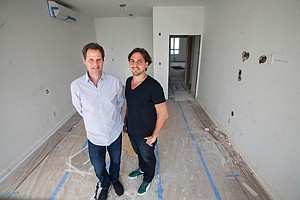 But a small step taken by Los Angeles Mayor Eric Garcetti last month will bring time savings for Mount as he tries to turn around space for new tenants. Garcetti consolidated two permits at two different city agencies into one.

The change chiefly applies to routine tenant improvement projects at commercial buildings and small restaurants. While fairly narrow in scope, it’s nonetheless the first in what the Garcetti administration is promising will be a series of steps toward a wider streamlined permit process. Mount greeted it warmly.

“Any time you don’t have to go through another department, it saves time,” said Mount, senior vice president for construction at Kilroy. “For our smaller, more routine projects, this will have a big impact and will allow us to commence our leases sooner.”

For a restaurant, the change could eliminate only a day or two from the process. For tenant improvements, the time savings could be similar, but could have a bigger cumulative impact because building owners have a steady flow of such work and timing can be critical when office tenants are on the move.

Local architects and land-use consultants were pleased with the change. Business groups such as Building Owners and Managers Association of Greater Los Angeles and the Central City Association also voiced approval. But they agreed that this was only a small step, that much more is needed to change the city’s longstanding reputation as a bureaucratic nightmare for businesses and developers.

Indeed, Los Angeles compares poorly with other major U.S. cities when it comes to construction permits. According to an annual U.S. Chamber Foundation study released last week, a typical new commercial construction project requires 14 separate permitting procedures, takes about 105 days and costs $85,000. That placed Los Angeles behind eight other major cities, including New York and Chicago, though it was better than San Francisco.

Business and development advocates say the city should take these additional steps: consolidate more permits and update the city’s zoning code and community plans to bypass the need for so many permits and variances.

Previous administrations, especially that of Antonio Villaraigosa, had touted grand plans to streamline the city’s permit process, but those plans often went nowhere. Villaraigosa pushed a plan to reduce the number of city agencies doling out building permits from as many as 12 to just two. But after two years of bureaucratic intransigence inside City Hall, that plan was dropped, leaving businesses, building owners and developers frustrated.

The Garcetti administration has taken a lower-key approach by implementing a series of small steps, rolled out one at a time instead.

The first permit consolidation debuted April 28 at a single counter inside the Building and Safety Department. The projects subject to this modest streamlining used to require Fire Department approval as well. The consolidation only applies for eateries with less than 100-person capacity and changes to office buildings that don’t involve changes to fire and safety systems – in other words, small, routine tenant improvement projects, such as reconfiguring office space and replacing carpeting and lighting.

Next, said Garcetti spokesman Jeff Millman, will be a move to transfer zoning interpretations now conducted by the Building and Safety Department to the Planning Department. This will start July 1 for large projects and gradually apply to all projects in order to address developer complaints about conflicting requirements.

That change should eliminate the possibility of building officers contradicting decisions by planning administrators. Such a bureaucratic crossfire can pin down a project for weeks, maybe more.

Other steps the administration hopes to announce before year’s end: putting all building permit records online and choosing a vendor to develop a single online portal with the ability to track a project through the permit process. There will also be a measure to reduce the burden for single-family residential homeowners seeking permits for remodels.

“These are significant steps, being rolled out piece by piece when they are ready,” Millman said. “We expect these changes to make a significant difference and improve the lives of Angelenos, businesses and residents alike.”

Dale Goldsmith, a partner at the Brentwood land-use consulting firm Armbruster Goldsmith & Delvac who served on a development permit reform committee during the administration of Richard Riordan 20 years ago, said this strategy could finally achieve some of the results many in the development community have been waiting decades for.

“As lofty as Antonio Villaraigosa’s goals were, the fact is, on permit reform he whiffed a number of times,” Goldsmith said. “Garcetti is trying to bump the runner to second with small measures that can be implemented quickly.”

The building and safety-Fire Department permit consolidation has already made a difference in the permit application for a restaurant in downtown L.A.’s Fashion District.

Torre, who came to Los Angeles several years ago from Europe, told the Business Journal last week that when he first discussed the project with friends and business associates early last year, they tried to dissuade him with dire warnings about the city’s permit process.

“They were all telling me it was going to be a disaster, that dealing with the Fire Department, the building and safety people, the Health Department and all the other departments was going to be too much and take way too much time,” Torre said.

As it turned out, the hardest part so far has been the six months it took to get a conditional use permit to sell alcohol. Since that came through in March, the other permits have all gone more quickly than expected, he said, including the consolidated permit he received two weeks ago as one of the first applicants through that program.

“From our side, it’s all gone pretty quickly,” he said.

Bruce Miller, Torre’s land-use consultant – who actually has been the one picking up the various permits – said the biggest savings came from the city’s two-year-old restaurant and hospitality express program.

“That chopped about 50 percent off the time it took to get permits for small restaurants of this type,” Miller said. In most cases, that meant only a few days less time. But in more complicated cases that previously had been prone to delays from conflicting code interpretations or other problems, the time savings could be weeks.

The most recent building and safety-Fire Department permit consolidation has cut an additional 20 percent off the permit turnaround time, Miller said.

Such time savings are more important when it comes to tenant improvements in office towers, since a new tenant often has a limited window to make a move and sometimes every day counts.

So the consolidation is welcome news for Gensler, an architectural firm in downtown that does lots of tenant improvement work for building owners.

“Our clients will be pleased,” said Arpy Hatvikian, a principal at Gensler. “This means when our people go down to City Hall to pull the permits, they will only have to spend three or four hours instead of a full day or even two.”

More important, Hatvikian said, the consolidation sharply reduces the chances that conflicting building code interpretations will arise between city departments. Not only can such conflicts take weeks to resolve but they have been known to scuttle a project.

“For them, this is more than just a minor change,” she said.