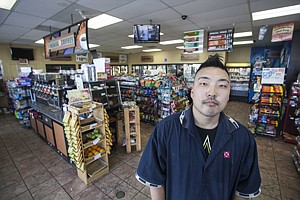 Convenience store owner Frank Ahn was hit last year with a lawsuit alleging a handicapped access aisle in his parking lot was three feet too narrow. As he was widening the aisle, Ahn got sued a second time for the same violation.

That was not supposed to happen under a state law passed two years ago in response to business complaints about abuse of the Americans With Disabilities Act. Even though he showed proof that the violation was corrected, Ahn might have to pay a settlement for that second lawsuit; the total cost including attorney fees could hit $4,000.

“There is no mechanism for us to prove to them that we were fixing the problem,” he said. “We just have to pay the money.”

Such demands for money were supposed to have been reined in by a 2012 state reform law, SB 1186. The bill was passed in response to mounting business anger over letters sent by ADA plaintiff attorneys demanding several thousand dollars each in settlement money to avoid lawsuits. The bill tried to limit such demand letters, requiring a copy to be sent to the California State Bar for review and possible enforcement action against those plaintiff attorneys who had a pattern of sending out numerous letters.

But defense attorneys say that plaintiff lawyers have simply shifted tactics. They have stopped sending the demand letters and now file suits targeting business owners such as Ahn, who owns a Circle K in Van Nuys, and hundreds of others like him in Los Angeles County alone.

Ahn’s example is revelatory. Actually, he’s faced three ADA lawsuits in three years. The first was filed in 2011, alleging discrimination because an employee questioned a man who was bringing a service dog into the store. The employee allowed them in, but Ahn was hit with a suit months later. He paid a settlement of $4,000 plus attorney fees.

The suit over the handicapped access aisle last year sought $25,000 in damages. Ahn decided to bring in a state-certified consultant to go through the store to ensure that it was fully compliant for disabled access. The consultant said the store and parking lot were largely compliant, but he suggested several additional steps – including adjusting the height of bathroom amenities – as a guard against further lawsuits. The fixes came to $24,000.

“I have gone above and beyond what’s required in trying to do the right thing to be fully accommodating of disabled customers,” Ahn said. “So far, I think I’ve spent a total of $60,000 to deal with everything related to these ADA lawsuits and I still have to pay more once this latest case settles. That’s all money out of profits.”

The plaintiff attorneys in the parking lot lawsuits – H.J. Sims of the ADA Law Group in San Diego and Rummel Mor Bautista of Hollywood – did not return calls or emails for this article.

Under the old system, a plaintiff’s lawyer sent a letter to a business stating that it was somehow out of compliance with ADA regulations. The lawyer threatened to sue the business unless the lawyer and his handicapped client were paid, typically $4,000 or so. The ADA was a favored vehicle because it has numerous regulations that include numbers; bathroom sinks must be between a minimum and maximum height in inches, for example.

But the reform, which took effect Jan. 1 of last year, called for the state bar to monitor the number of demand letters sent by each lawyer. Those who sent a lot could face sanctions. At the Business Journal’s request, the state bar counted only 226 demand letters statewide last year. Defense attorneys believe there were thousands in previous years.

But now that plaintiff lawyers tend not to send letters but simply file lawsuits, defense lawyers complain that the situation is worse. Settlement costs are now greater because lawsuits take more time and money for the plaintiffs and they want to recoup those additional costs.

As a result, settlements now often exceed $10,000 when legal fees are included. Often, business owners figure that’s still cheaper than taking a case to trial and facing the prospect of paying out $50,000 or more in settlements and legal fees should they lose. While the plaintiffs typically get $4,000 in settlement payments, the rest of the money goes to lawyers, fueling the filing of more cases.

“They are clearly doing this for profit, not to genuinely improve the conditions for the disabled,” said Marc Wasserman, a Torrance attorney who defends business owners against ADA lawsuits.

Of course, the businesses usually must spend thousands more on fixes to their establishments. Some of the improvements are based on valid complaints and will help the disabled have more access; others are made in an attempt to ward off more lawsuits.

Disabled rights advocates say many of the lawsuits address legitimate problems with access: bathroom stalls too small to accommodate wheelchairs, paths too narrow for wheelchairs or counters too high. They also say that despite the ADA’s 24-year history, discrimination against the disabled persists.

“There’s a continuing obligation under the ADA, as you have more resources, to remove barriers and fix things,” said Paula Pearlman, executive director of the Disability Rights Legal Center at Loyola Law School and a visiting associate law professor at the school.

“Even if a business owner does make fixes, that does not make things all right for those who have experienced discrimination in access,” she said. “They are entitled to compensation for the discrimination they experienced.”

But Pearlman acknowledged that the filing of frivolous lawsuits has gotten out of hand and it’s damaging the environment for legitimate cases.

“They are violating the spirit of the law and making it more difficult for legitimate cases to go forward,” she said. “They create a backlash against people who are seriously trying to do something to make the built environment more accommodating.”

One business owner who took steps to improve access for the disabled is Snay Patel, owner of a Roadway Inn motel in Norwalk. When he and other investors bought the 42-room motel in 2005, they spent several thousand dollars making changes in some of the rooms to accommodate disabled guests, including roll-in showers for people in wheelchairs.

“When the franchise inspectors and the city inspectors came through, everyone signed off that we were compliant with the ADA,” he said.

Despite this, Patel was served with an ADA lawsuit in late 2011. He soon learned that two other nearby motels got hit with virtually identical lawsuits on the same day. All three claimed identical access barriers – disabled parking spaces too small, the pathway to the motel entrance not wide enough to accommodate a wheelchair, sinks and toilets not the right height and more.

“Some of the complaints were demonstrably false, with inaccurate measurements,” Patel said. “What’s more, during all the years leading up to this, we never had one complaint from any of our disabled customers. Not one.”

Some alleged violations apparently exploited a loophole in an earlier ADA lawsuit reform bill, SB 1608, which was passed in 2008. Under that bill, the plaintiff must show that the violation prevented equal access to the facility before seeking damages.

But some of the alleged violations, such as failure to post all the required parking signs, did not impede access. Peters, who also represented Patel and the two other nearby motel owners, said the lawsuits were tailored for a loophole that allows ADA lawsuits when conditions can lead to “discomfort or embarrassment.”

“We didn’t want to settle but it was the easiest and cheapest option for us,” he said.

But not everybody chooses to settle. Roanne Mitchell, who owns two bars in Torrance, has been hit with five ADA lawsuits in the last three years. She settled the first two, but since then she’s been fighting.

Mitchell’s two bars, the Zebra Room and Hi N Dry, are in older buildings; both have restrooms that have little or no space for wheelchairs. She estimates she would have to spend up to $30,000 removing walls, reconfiguring the plumbing and making other changes to make each restroom fully ADA compliant. She said she doesn’t have the money.

“After I settled the first two cases, I started saving up the money so that I could make the changes,” she said. “But then I got hit with three more lawsuits – all in a matter of weeks and all from attorneys in San Diego – and I could see that unless I fought back, there would be no end to the lawsuits. It’s time somebody put a stop to all this.”

So she hired attorney Wasserman, who has challenged the plaintiffs to appear at depositions, filed motions for discovery and done everything he can to make it more difficult for the plaintiffs and their attorneys to collect.

“What these attorneys count on is getting a quick settlement so they don’t have to spend much money on the cases,” Wasserman said. “We’re denying them that quick settlement. When they get that message, we think they will drop their cases.”

One case has been dismissed, but the other two are still pending.

Meanwhile, the experience has taken a toll on Mitchel, 51.

“I can’t sleep and whenever someone with any sort of disability comes into my bars, it’s very nerve-wracking,” she said. “And, of course, the money I’ve been forced to spend on legal fees could have been spent on actually fixing the bathrooms.”

Mitchell last week flew to Sacramento as part of a delegation from Californians Against Lawsuit Abuse calling for stricter state controls on ADA lawsuits. The organization says that even after the reforms, California still accounts for more than 40 percent of all ADA lawsuits filed nationwide, although the state has 12 percent of the nation’s population.

Some want a fix-it provision, where a business owner gets a window of 90 days or so to fix an access problem without facing a lawsuit or paying a settlement fee.

Attorney Peters, who was also part of last week’s delegation, said other changes are desperately needed, especially requiring official certification of ADA compliance every time a business owner gets a license renewed or a commercial property owner gets a building permit.

“I believe that alone would eliminate 90 percent of the cases,” he said. “Then private litigation would only be necessary to bring the holdouts to heel.”