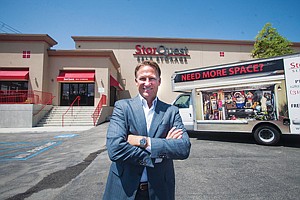 Unit by Unit: William Warren Group’s Bill Hobin at a StorQuest facility in Playa Vista with one of the company’s pickup vans. Photo by Ringo Chiu.

When you think of self-storage, you don’t think Ritz-Carlton. But one local company is taking that approach.

William Warren Group, a Santa Monica developer and operator of self-storage facilities, uses drivers to pick up customers’ storage items from their homes and has bellhops to help arriving customers unload items from their cars and take them to units.

“We want to take the hassle out of moving things into and out of storage,” said Bill Hobin, chief executive of William Warren.

Also, the 20-year-old private company, which operates under the name StorQuest, has been on a buying binge of late as it competes with industry giants such as Glendale’s Public Storage Co. This year alone, it has added 20 locations to bring its total to about 100 storage properties. The most recent purchase: a 15-property portfolio covering properties in Arizona, California, Colorado and Texas. The company’s goal: 150-plus locations by mid-2015, which would make it one of the largest regional private operators in a highly fragmented industry.

The company now offers the pickup and unloading services at about two-thirds of its locations.

But can William Warren’s upscale strategy work in an industry known for a bare-bones, do-it-yourself mentality?

Just maybe, said one industry analyst. As aging baby boomers downsize and more women use storage facilities, demand will likely grow for services to help them move items into or out of storage, said David Harris, analyst with the New York office of Century City investment banking firm Imperial Capital.

“You or I could very easily pack our things in boxes, load up the car or U-Haul and take them down ourselves,” Harris said. “But what about the 70-year-old couple moving out of their family home and downsizing? They can’t lift the boxes themselves, so they often have to call their children or call a moving company. That’s a great opportunity for a self-storage company to branch into.”

The key issue, Harris said, is whether the company can afford the higher cost of providing drivers and bellhops.

Hobin said StorQuest is tackling this concern by only offering the free pickup and bellhop services in its more upmarket locations, such as Playa Vista and downtown Los Angeles, where the company can charge higher rents.

“I liken it to the difference between the Ritz-Carlton and the Hilton Garden Inn,” he said. “There are some locations that are better suited for the Ritz and others for the Hilton.”

He said rents range from $125 a month to $250 a month for a 10-foot-by-10-foot storage unit, depending on the facility’s location. For a 10-by-30 space, rents start at $300 a month and can reach $700 in parts of L.A.’s Westside. Public Storage charges roughly equivalent rates on the low end, though maybe not quite as high on the upper end.

Hobin said StorQuest started offering the free services a few years ago when he realized more than half of the company’s customers were women – those living alone or single moms.

“We were looking for a way to avoid the hassle they would face either moving the goods themselves or having to hire their own movers,” he said.

While other self-storage companies rent trucks to their customers, few, if any, provide drivers. And while workers at other self-storage facilities might occasionally help a struggling customer load items onto dollies, none has workers exclusively devoted to helping customers move items from their cars to storage units.

In order to avoid being designated a moving company subject to licensing and regulation from the California Public Utilities Commission, StorQuest truck drivers only pick up items designated for storage. They won’t take major appliances or larger pieces of furniture.

“StorQuest is not in the moving business,” Hobin said. “We provide a truck and driver as a convenience to our customers so they don’t have to deal with renting a truck and driving it. But we will not show up and pack up a house full of furniture. We are providing transportation and light assistance.”

Hobin founded William Warren 20 years ago – giving the company his first and middle name – after working for a homebuilder. He noticed many consumers moving into houses immediately filling up their homes and garages, leaving no space to park their cars.

For much of its history, the company focused on ground-up construction of self-storage facilities in Southern California and a few other Western states, including Arizona and Colorado.

“We would open about three or four properties a year,” Hobin said.

But the recession took that strategy off the table as credit tightened for building projects. That prompted the company to focus more on acquiring existing self-storage properties.

The self-storage market has long been very fragmented, with three major public companies at the top: Public Storage (by far the largest); Extra Space Storage Inc. of Cottonwood, Utah; and U-Haul International of Phoenix, according to trade publication Inside Self Storage. There are a few regional players and then hundreds of smaller operators. The larger public companies have vast amounts of storage options for consumers to peruse online, along with phone centers. Add in the bigger companies’ easier access to capital, and the smaller businesses are at a disadvantage; as a result, the smaller outfits tend to have occupancy rates of around 80 percent while the larger players have more than 90 percent occupancy.

“A lot of smaller operators are having a tough time competing in this digital era, so they are selling part or all of their portfolios,” Hobin said.

Also, as the recession prompted more people to downsize and put their excess household goods into storage, institutional investors and private equity firms began pouring money into the self-storage sector, he said.

So, two years ago, William Warren started tapping into some of that private money and embarked on a nationwide expansion. Last year, the company opened a regional office in Tampa, Fla., and bought 23 properties in that state and in South Carolina. Earlier this year came the 15-property portfolio purchase, totaling more than 6,800 storage units and 861,000 square feet. Altogether, the company’s portfolio has nearly doubled in the last two years.

Imperial’s Harris said the trend in the industry is now toward consolidation. Regional players and the large national public companies are swallowing up mom-and-pop operators.

“Ownership is gravitating into the hands of the well-capitalized, larger owners,” he said.

This has of course benefitted Public Storage, which has seen transaction volume pick up in recent months. Chief Executive Ronald Havner told a real estate industry gathering earlier this month that the company recently closed on a $25 million portfolio in Charlotte, N.C., and was preparing to close on a $240 million portfolio early next month.

Harris said competition from the likes of Public Storage is perhaps the greatest threat to William Warren’s expansion plans.

“If they are looking to acquire attractive properties, then they have to outbid other folks who are interested,” he said. “This is especially true if they are going to go up against Public Storage, which by dint of its sheer size, has the lowest cost of capital compared to anyone else.”