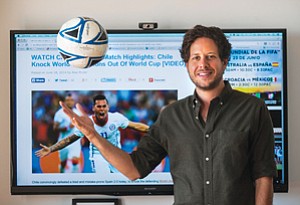 Though the 2014 FIFA World Cup is taking place more than 5,000 miles away, local tech companies are cashing in on the global event, leveraging a marketing gold mine that only comes along once every four years.

More than 3.2 billion people are expected to watch the World Cup over its five-week run in Brazil, and in the United States, where interest in soccer lags behind almost every other country, ratings are increasing. Last week’s thrilling 2-1 win by the United States over Ghana drew more than 11 million viewers according to Nielsen, making it the most watched men’s soccer game of all time in the United States on cable. An additional 1.4 million people watched the game on ESPN’s website and mobile app.

That kind of attention has advertisers rushing to get their products in front of all those eyeballs and they are increasingly turning to tech firms that can aid them in the digital realm.

Among those is Santa Monica in-image ad maker GumGum, which is helping large national advertisers associate their brands with the “beautiful game” by creating digital World Cup campaigns for three clients that have budgets averaging $200,000.

The company’s technology scours their websites for specific images on top of which brands can place rich media ads that GumGum creates in house. A recent example is the placement of an ad for Walt Disney Co.’s “Maleficent” that appeared layered on top of an image of Angelina Jolie.

Ira Kalb, a clinical marketing professor at USC’s Marshall School of Business, said the World Cup and other major sporting events are enticing to national and international marketers whether or not they’re selling products that have anything to do with sports.

“They’re tapping into the size of the audience,” Kalb said, and using the platform to create a brand impression while eyes are either glued to the TV watching the event or reading reports about it online.

Those fans, he continued, are also sharing articles, images and videos of the tournament on social media in droves, allowing a brand’s message to reach a whole new layer of potential consumers.

The opportunity is not limited to mass audiences; the World Cup is an opportunity for local retailers to cash in.

Saucey delivers liquor, beer and wine that its users purchase from local liquor stores through a smartphone app. It makes money only on the delivery fee, which varies based on where the customer lives. It has launched several promotional efforts to encourage soccer fans to order alcohol for the game-viewing parties.

Kalb noted that the number of global viewers of the World Cup is “10 times the size of the Super Bowl.” Even in the States, the ratings jump extended to games in which the United States wasn’t playing. Nearly 4 million people watched the opening contest between Brazil and Croatia, a 52 percent increase from the opener four years ago between South Africa and Mexico.

That popularity is spilling over into the online and mobile realm. Manchester, England, digital consulting firm Profoundry said in a company blog post last week that marketing spends for this World Cup could hit $1.3 billion, with an increased share going to digital campaigns.

In addition, advertisers are increasingly going after the mobile market as part of their ad buys.

New York research firm eMarketer reported last week that smartphones are the most popular device behind television for soccer fans to follow the tournament. The report also noted that “37 percent of soccer fans worldwide said they interacted with a mobile ad daily in order to get more information about a product or service.”

The trend toward mobile is fine with GumGum founder and Chief Executive Ophir Tanz since its ads are viewable on screens of any size, including mobile and tablet devices. Currently, 33 percent of its traffic comes from mobile browsers.

Tanz said the 6-year old company’s ads receive 340 million unique viewers per month, and GumGum expects to reel in almost $50 million in revenue this year – a 300 percent year-to-year increase. Next year’s total, even without a spike generated by a global sporting event, is expected to top $100 million.

The company, which has received $10.8 million in funding from investors including Upfront Ventures and First Round Capital, declined to say who its World Cup clients are. In the past, Toyota Motor Corp., Canon and Samsung have been among its corporate clients.

For each of its three World Cup campaigns, GumGum’s platform will search image inventory across its publishers’ websites curated by keyword, category and demographic parameters. When an image match is made, that’s where the ad goes.

For example, one advertiser wants its ads to appear exclusively on Hispanic-oriented editorial content and websites. Some of those ads were produced in Spanish as well as English. Another wants to target only men, so its campaign will run on men’s lifestyle sites that cover sports, business and news. The third campaign is targeted only at consumers in six states.

Each advertiser is using a similar set of roughly 135 keywords related to the World Cup, including names of teams and star players as well as general information – think “futbol,” “penalty,” and “Group of Death.” Keywords also include terms specific to each brand.

Tony Winders, GumGum’s senior vice president of marketing, said in an email that seven times as many people click on the company’s ads than comparable banner ads but its click-through rate is less than 1 percent on average.

Saucey founder and Chief Executive Chris Vaughn is trying using the competitive nature of the World Cup to sell as much alcohol as possible.

“What’s the official civilian sport of the World Cup?” he asked. “Drinking.”

In addition to a promotional “World Cup” code that gets customers $5 off their virtual bar tab, Saucey will be posting tallies of which team’s fans are drinking more on its social media account throughout the tournament.

It’s also putting together country-specific beverage packages that let a team’s fans drink its national alcohol while watching games. A Mexico fan could order tequila, for instance, while supporters of France’s “Les Bleus” might see an offer for some fine French wine.

Vaughn said the company saw an uptick in business during the first weekend of the tournament as hundreds of bottles were sold.

“We’ve definitely had some great pickups so far,” he said. “Friday and Saturday were extremely popular.”

A lot of recent deliveries have been sent to businesses – particularly as the work week winds down, he said.

“All these people drink on Fridays,” he laughed.