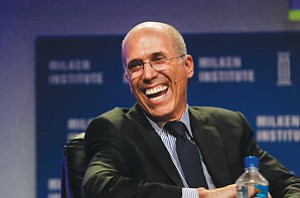 All the Way to the Bank: Jeffrey Katzenberg at a recent Milken Institute conference. Photo by Bloomberg News

“The Croods” were very good to Jeffrey Katzenberg.

The chief executive of DreamWorks Animation SKG Inc. more than doubled his pay after the release of the hit film last year. The animated movie about the adventures of a prehistoric family grossed more than half a billion dollars at the worldwide box office.

OK, it wasn’t just the movie: DreamWorks also has been making successful inroads into China, worked out a distribution deal with Netflix and bought YouTube company AwesomenessTV. All those things helped DreamWorks to a strong year, according the Glendale studio’s annual report,

and the board credited Katzenberg’s leadership, rewarding him with a $13.5 million package that included increased salary, stock awards and a $6 million bonus.

That represented a 157 percent increase over the prior year’s compensation, and catapulted Katzenberg to No. 6 from the No. 39 slot on the Business Journal’s list of 2013 Chief Executive Compensation at L.A.’s public companies. (See page 13.)

In total, the 50 executives on the list showed an 8 percent decline in 2013 compensation, falling to a combined $477 million.

That decrease comes largely as a result of the pay for Activision Blizzard Inc. Chief Executive Robert Kotick coming back to Earth. His extraordinary $64 million compensation in 2012 was the result of a stock award tied to a new employment agreement; his compensation fell to $10 million on this year’s list. Take Kotick out of the mix and the total rose 3 percent.

Robin Ferracone, chief executive of Farient Advisors in Pasadena, who consults companies about executive compensation, said that overall increase falls below the rest of the nation in part because L.A.’s industries aren’t as diverse as elsewhere.

“The national trend of summary compensation is up by 8 to 9 percent,” she said. “The performance of most companies has been good and the general economics have been good.”

Also, smaller increases are a function of shareholders being allowed to weigh in on executive’s compensation packages under the “Say on Pay” provisions of financial reform law, according to Joseph A. Sorrentino, managing director at executive compensation consultancy Steven Hall & Partners in New York.

“Say-on-pay has had an impact on how compensation committees work,” he said. “That has a tendency to kind of constrain large increases or things that would be potentially noteworthy. Companies are trying to stay below the radar.”

Lions Gate Entertainment Corp.’s “Hunger Games” series helped its chief executive, Jon Feltheimer, nearly double his compensation. His package jumped 95 percent to $12.6 million, placing him in the No. 8 spot, up from No. 31 last year. He received slight increases in his salary and his bonus; his rise is mostly due to an increase in his stock awards of $3.6 million, a 2,871 percent hike.

Executives at financial firms performed well amid the recovery.

Bruce Karsh, president of downtown investment firm Oaktree Capital Group, made his debut on the list in the No. 1 spot with $43.5 million in total compensation. All of that was earned from carried interest he received from his portfolio – he received no salary, bonus, stock or option awards.

Steven W. Streit at Green Dot Corp., a Pasadena prepaid debit card provider, got the largest pay bump on the list, a 1,120 percent boost. That came thanks to a stock award valued at $5.2 million. Streit’s large equity award was his first since April 2011.

Matthew P. Wagner at PacWest Bancorp, a bank holding company in Westwood, registered a 536 percent pay boost. Most of that came in the form of a $9.7 million stock award that came his way after the bank had a strong year, including a market-pleasing merger with CapitalSource.

Not everyone rose, however. In addition to Kotick, 16 chief executives saw lower compensation packages last year. For some, like Kotick, that decline came as a result of big awards the previous year. For example, pay for Alan Auerbach, Puma Biotechnology Inc.’s chief executive, saw his pay package decline 82 percent, to $5.4 million. The decline came even as Auerbach received a higher 2013 salary and bonus than in the prior year, but his overall 2012 compensation was higher because he received a one-time warrant valued at $25.8 million when the company went public. Even after that steep deduction, he remained on the list at the No. 44 spot, down from his debut at No. 3 on last year’s list.

Compensation for Dov Charney at American Apparel, No. 12 on last year’s list, dropped 91 percent to $1.1 million when a condition of his employment agreement prevented him from receiving a stock award last year.

Russell Goldsmith at City National Bank, No. 46 on last year’s list, fell off the rankings when his pay dropped 11 percent to $3.9 million. That resulted from the termination of his supplemental executive retirement plan, which was invested in the company’s stock fund.