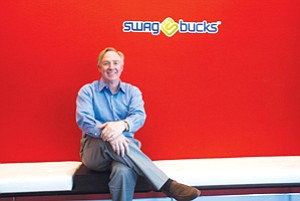 There was a time, not that long ago, when L.A. tech startups looking to bring in “grownups” to take them to the next level had to look far afield. Experienced chief executives were brought in from Silicon Valley or such mature industries as manufacturing or big pharma.

But as Silicon Beach has come into its own and L.A. tech has minted a number of success stories, there are signs that a new wave of seasoned managers being brought in to shepherd young companies are both tech savvy and fully immersed in the local culture.

Burr, who took the helm of Santa Monica’s CallFire in December after joining the cloud-based voice and text platform as chief revenue officer in January 2012, is among a slew of recent hires with track records in local tech.

Notable among this crop of well-heeled chief executives settling into new digs is Swagbucks’ Chuck Davis. The former Shopzilla and Fandango topper, who guided those local companies to big exits in 2005 and 2007, respectively, took the helm of the booming online consumer rewards site last month when Palo Alto’s Technology Crossover Ventures, where he is a venture partner, handed the El Segundo company $60 million in exchange for what the company called a “significant minority” stake.

Another veteran who stepped into a new executive role is former Global Crossing Chairman Gary Winnick, who took over as chief executive at T+ink in March after his investment firm, Winnick & Co., acquired a majority stake in the company. T+ink creates interactive digital components for physical objects through what’s called conductive technology.

While observers aren’t sure there’s enough evidence to qualify these moves as a trend just yet, there’s optimism about what it means for the L.A. tech sector.

Gerard Casale, co-founder and managing director of Santa Monica venture capital and advisory firm Tylt Lab, said the local tech sector benefits when its companies bring in homegrown executives because it means those leaders and companies are likely to be rooted here long term.

“It’s great for the area,” he said. “The more we have seasoned entrepreneurs stay here and not fly the coop, that’s a good sign.”

Swagbucks, which offers rewards for searching the Internet, taking surveys, playing games and watching videos, among other online activities, said it has been profitable since 2010, when it generated revenue of $15 million. Last year’s sales were $53 million, a 51 percent year-over-year increase.

Swagbucks was co-founded by Josef Gorowitz and Scott Dudelson in 2008 in a back office at Chabad of Beach Cities, an Orthodox Jewish religious center in Redondo Beach. Gorowitz said he knew the time was right to step aside as chief executive as the company positions itself for an eventual public offering or buyout down the road.

“We came to a point where we said we need to start acting like a grown-up company,” Gorowitz said. “We felt that validation would be important” to quell the doubts of anyone in the investment or advertising world who might have had doubts about the business.

Davis explained that a company’s human assets are integral as it builds top-notch business partnerships and moves toward a strategic exit.

Advertisers want to be in business with winners, Davis said.

And if exits count as wins, then Davis can be classified as a champion.

Both Davis and Gorowitz said they’ve already seen a strong reception to the hire.

“We’ve had lots of companies and brands reach out to us to explore different partnerships that might not have come here had we kept business as usual,” Davis said, though he declined to name individual brands.

Besides his name clout, Davis also brings much needed organizational expertise to Swagbucks, which in turn allows its tech-minded co-founders to concentrate on innovation and clients rather than on managing a growing corporation.

“I don’t consider myself a techie,” said Davis, who holds a degree from Harvard Business School. “The management team should guide things, but the real doers who are building and laying down the brick and mortar need to be protected from getting involved in unproductive uses of their time.”

There’s also decades of industry knowledge that comes from building successful companies, or a “historical learning curve” as Tylt’s Casale calls it.

“They’ve been through the battles and made the mistakes,” Casale said. “That’s the kind of thing the youngest and brightest won’t have.”

“I see it as a trend,” said Burr, who’s also the company chairman. “It’s a real valuable thing that’s happened in L.A. tech culture. We’ve kind of got a second generation of homegrown executives.”

Burr co-founded free Internet provider NetZero in 1997 and saw it through its $160 million IPO two years later. He also served as chief executive for WebVisible, an online ad software maker in Playa Vista from 2009 to 2011.

CallFire, a 60-employee company whose service allows organizations to send instant text messages and phone calls to customers, raised an undisclosed amount of funding last year and Burr said the company is in the process of raising more.

Echoing Davis’ sentiments, Burr said his first order of business upon assuming the top job was to figure out how to present the company to potential partners and investors.

“I spent the first several months with the team doing deep dives on data,” Burr said, while trying to learn how to “talk about the business in business terms and not just to our customers.”

Winnick, whose tenure at telecom provider Global Crossing closed in controversy as he sold more than $700 million in stock nine months before the company filed for Chapter 11 bankruptcy protection, also appears to have big plans for T+ink.

In addition to taking over as chairman and chief executive, he has assembled an impressive board to oversee its expansion. Kent Kresa, former chairman and chief executive of Northrop Grumman Corp., has joined T+ink as vice chairman and John C. Cushman III, co-chairman of Cushman & Wakefield Inc., the world’s largest private commercial real estate firm, joined a month later along with Richard Ressler, co-founder of global real estate and investment firm CIM Group.

Winnick has declined multiple interview requests, though it’s clear from T+ink’s revamped website that he has ambitious goals.

“Our agenda is nothing less than to ‘T+ink’ every product on the planet and to become the dominant force in the Internet of things,” the website says.

“The guy knows how to build a really solid board of directors,” Casale said. “He can build financing. He’s got a great network and he understands how companies should be built.”