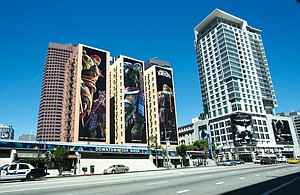 The Figueroa Hotel, an eclectic tourist haven that has been a fixture in downtown Los Angeles since the late 1920s, has been sold for $65 million, according to sources with knowledge of the deal.

Alan X. Reay, president of Atlas Hospitality Group in Irvine, said the price – about $228,000 for each guest room – is unprecedented in downtown, where 10 years ago it was difficult to drum up any investor interest.

“Considering the age of the hotel and the amount of money that’s likely to go into it, I believe that’s a new record for price per room in downtown Los Angeles,” he said. “It’s a huge testament to the vitality of downtown.”

The 15-story building, built in 1925 by the YWCA as a hostel for professional women, commanded a steep price because it sits on a prime South Park site across the street from Staples Center and L.A. Live. It also has three expansive south-facing exteriors that have long been used for building-size mural advertisements.

The buyers declined to comment on their plans for the hotel, though sources said it is likely to get a makeover to bring it up to date.

Known for its vintage mishmash of Moroccan, Indian and other exotic decor, the Figueroa has not undergone significant renovations in decades. In fact, Uno Thimansson, the hotel’s former general manager, told the Los Angeles Times in 2010, “We never renovate.”

The hotel, a popular place for weddings and celebrity parties, features 25,000 square feet of event space and an outdoor swimming pool with an adjacent bar.

The long-rumored sale of a partial interest in Century Park, the 3.2 million-square-foot Class A office campus in Century City, closed earlier this month in a deal that valued the complex at more than $2.45 billion.

Hines Real Estate Investment Trust Inc. of Houston, together with JP Morgan Asset Management of Rockland, Md., acquired a 67 percent stake in the 14-acre property for about $1.64 billion, according to real estate data provider CoStar Group Inc. The partners purchased the interests of investment funds formed for the benefit of General Motors Co. and AT&T Inc. JP Morgan, which owned a one-third stake in the property prior to the transaction, upped its interest to 50 percent. Hines, which sources said in March had enlisted the Hong Kong Monetary Authority as an equity partner, took the remainder.

In a statement, JP Morgan said it also had new loans placed on each of the three buildings.

At nearly $757 a square foot, the sale price was the highest for a sizable commercial office property in Los Angeles, valued far above the last big deal done in the area. Last summer, CommonWealth Partners bought the nearby 21-story office building at 1888 Century Park East for $305 million, or about $604 a square foot.

Still, Arty Maharajh, a vice president of research in the downtown L.A. office of Cassidy Turley Inc., said the property might have fetched even more had JP Morgan not retained an ownership stake.

“The price was based on partial interest pricing, so if it had sold without JP Morgan continuing to remain an owner, it might have been even higher,” he said.

The office park, often referred to as Century City’s “super block,” is home to the Creative Artists Agency building at 2000 Avenue of the Stars and the twin 44-story Century Plaza Towers at 2029 and 2040 Century Park East. The property includes a four-acre park, the Annenberg Space for Photography, several cafes and restaurants as well as parking for more than 5,000.

L.A. agents of New York real estate investment bank Eastdil Secured managed the sale for both buyer and seller. Hines did not return requests for comment.

West L.A. corporate housing company Oakwood Worldwide announced last week that it had formed a real estate investment team to acquire and develop dozens of multifamily properties nationwide over the next several years. The formation of the team, which includes executives Kristen Zimmerman, John Hinkle and Mike Jara, comes shortly after the company announced a $4 billion joint venture with Singapore real estate company Mapletree Group to expand Oakwood-branded apartments across the country and overseas. … Eastdil Secured has named Mark C. Chu a managing director in its L.A. and Hong Kong offices. Chu joined Eastdil from Singapore real estate fund management company ARA Asset Management Ltd. In his new role, he will work to source Asian-based equity and debt for private and public transactions.

Staff reporter Bethany Firnhaber can be reached at bfirnhaber@labusinessjournal.com or (323) 549-5225, ext. 235