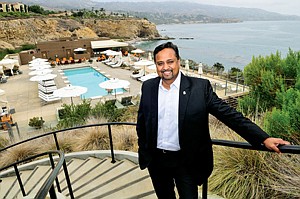 Up to Code: Agnelo Fernandes at Terranea Resort in Rancho Palos Verdes. Photo by Thomas Wasper

For a few days in May, the sleepy seaside suburb of Rancho Palos Verdes becomes the epicenter of the tech universe. That’s when one of the most prominent gatherings of technology and business leaders comes to the city’s Terranea Resort.

The conference is organized by tech website Re/code, and the relationship keeps the hotel booked during the annual Code Conference and has become a critical part of the hotel’s sales and marketing strategy to draw more event business. Becoming home to the conference has raised Terranea’s profile and directly led to new group and event bookings even for companies outside the tech world. The resort’s top salesman gives a lot of the credit to Code Conference for raising Terranea’s profile in the event and conference world.

“We’ve seen groups inquire and even book as a result of the Code Conference,” said Agnelo Fernandes, Terranea’s head of sales and marketing. “For us, they’re probably the most valuable in terms of giving the resort initial exposure and continuing to do that.”

Reporters Kara Swisher and Walt Mossberg co-founded the All Things Digital conference in 2003 while they were at the Wall Street Journal, and started a tech website, All Things D, under the Dow Jones umbrella in 2007 with several additional reporters. They left Dow Jones, publisher of the Journal, to launch Re/code at the beginning of this year, bringing most of their staffers with them. The annual event was rebranded Code Conference this year.

Swisher did not respond to a request for comment, but Jill Pendergast, whose JP Productions of San Mateo has planned the group’s events from the beginning, said the need for a bigger space led her to start looking for a new location in 2009.

“We like to have the conference in a somewhat remote location, but also accessible to an international airport,” she said.

Pendergast said the typical large convention hotel just doesn’t have the pizzazz Re/code wants associated with the Code Conference, and that makes it harder to recruit keynote speakers such as Tim Cook, chief executive of Apple Inc., and Wal-Mart Stores Inc. Chief Executive Doug McMillon, both of whom came to this year’s event. It also makes it more difficult to keep VIPs on the property rather than have them escape to fancier digs. Terranea’s relative remoteness (about a 20-minute drive from the 405 down a windy mountain road) also works to the conference’s advantage.

About 700 people came to this year’s Code Conference, which lasts for most of three days. Terranea wouldn’t say how much revenue it brings in from the conference, but it fills the property. Rooms at Terranea can range from about $300 a night to thousands of dollars for some of the property’s bigger suites and villas, although the resort gives conference attendees discounted group rates.

Pendergast said because the resort was new, the conference didn’t have to deal with the challenges of an entrenched institutional culture. Event workers were open to suggestions and critiques because there wasn’t a tried-and-true formula to stick to.

“It took a couple years, but every year we gave them some constructive feedback that would help them,” she said.

“We do see a lot of social media activity and PR activity, and as a result, traffic spikes on our website,” Terranea’s Fernandes said. “Leading up to the event, it’s fairly quiet, but once the conference opens, the floodgates open for those days and lasts for a good three to four days after.”

These virtual hits tend to translate into real business. He said these potential customers are first and foremost drawn to the location and grounds, but the technical capabilities of the hotel have become a big selling point when they are ready to book.

“When you get technology companies, they have specific requirements,” Fernandes said. “You can’t falter on any of them. I think as a result, we’ve seen referrals and we’ve seen people come back.”

Terranea’s close association with the Code Conference does carry some risk. Denise Lee Yohn, a San Diego branding consultant familiar with both the resort and the event, said a potential pitfall would be an embarrassing moment at the conference that could make Terranea an instant punchline.

“If the hotel screws something up for someone famous during the conference, the world could find out about it quickly given how all attendees are armed with mobile devices and vast social networks,” she said.

But the potential rewards are bigger than the risks.

“The upsides definitely outweigh the downsides,” Yohn said. “Hotels really need to differentiate themselves and a high-profile conference like Code can reinforce Terranea as a destination.”