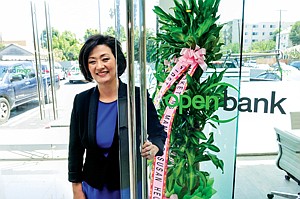 With just six branches and a few hundred million dollars in loans, Koreatown’s Open Bank is the kind of small lender that serious investors have ignored for the past few years.

But the bank last month raised $30 million in capital, a huge sum for a bank of its size. It was just one of several capital raises completed by small L.A. lenders in the past few months.

It’s a sign that investors, who turned away from community banks amid the recession, are interested again, thanks to bargain prices and a wave of bank consolidation that’s expected to make small banks more valuable.

And bankers have noticed. In boardrooms across Southern California, executives are talking about raising capital of their own, said Rick Levenson, chief executive of San Diego investment bank Western Financial Corp., which works with small lenders. When banks have more capital, they can make more loans and grow their business or use the extra cash to buy other banks.

“Seems like everyone’s saying, ‘Hey, we’re thinking about it,’” Levenson said. “We’re going through a wave of recapitalization.”

Along with Open, at least four other small banks in Los Angeles County have raised capital so far this year: First Choice Bank in Cerritos, EH National Bank in Beverly Hills, and downtown L.A. lenders Premier Business Bank and California Business Bank. All are small, with less than $500 million in assets, and all are either privately held or have stock that trades infrequently.

It’s been challenging for banks in that class to raise money since the recession started. Several small hedge funds that invested in community banks went under, and banks themselves didn’t look like safe bets after the crash and in the sluggish economic climate that followed.

“Since 2008, we really haven’t seen small community banks able to access capital,” Wishner said. “It’s just starting to open now. The economy has come back and these institutions have cleaned themselves up.”

To investors, small banks such as Open and First Choice look like good values. Compared with buying a share of a bigger bank, participating in a small bank’s capital raise buys more equity for less cash.

Bank investors often benchmark their investments to a bank’s book value – essentially assets minus liabilities, or what the bank would be worth if it shut down tomorrow. In the case of large Korean-American lender BBCN Bancorp Inc., a single share traded for $15.80 on July 16, a 51 percent premium above the bank’s book value of $10.46 a share.

Those low premiums are especially attractive to investors who believe more small banks will be acquired over the next few years. Banks lately have been selling for between 30 percent and 60 percent above their book value; before the recession, they often sold for twice book value.

To buy in at just 10 percent or 20 percent above book looks like a bargain, said Mark Bonenfant, a partner at downtown L.A. law firm Buchalter Nemer, which represented Open in last month’s private placement.

“What’s attractive about Open Bank and smaller banks is that they show they’re still good values on a book-value basis,” he said. “Investors are looking for value.”

And the premiums paid to acquire banks are expected to rise as the number of banks dwindles. The county was home to 88 banks at the beginning of 2008, but just 65 remain after a bevy of mergers, acquisitions and failures. Meanwhile, no banks have been founded here since 2009.

That relative scarcity is pushing prices up, Levenson said.

Much of the capital raised lately by banks has come from their existing investors, though institutional investors have participated as well.

Bank insiders were likely the biggest contributors to capital raises at EH National and Premier. Executives at those banks did not return calls for comment.

With institutional investors coming back, raising money is easier today than it was a few years ago, but Levenson cautioned that those investors won’t be interested in just any deal. They’ll need a good reason to believe a bank will be able to grow or become an attractive acquisition target for another bank, he said.

“If you have a new management team, a transaction taking place or something else where investors can see the return, the money is out there,” he said. “There’s got to be a story behind it.”

The better the story, and the more experienced the bank’s management, the more interest from investors. Take Open: The small Koreatown lender was founded in 2005 and struggled through the recession. But in 2010, the bank hired Min Kim, formerly head of much larger Korean-American lender Nara Bank, as its chief executive. Nara merged with rival Center Financial to form BBCN in 2011.

That deal and others have reduced the number of Korean-American lenders, and Kim said Open has been able to capitalize by grabbing customers who didn’t like working with the now-larger banks. That’s how Open has managed to nearly double its assets over the past two years. The bank now has assets of $384 million and last week opened its sixth branch.

“There were a certain number of smaller customers who were not happy with the big-bank business model,” she said. “So there was a niche market created for a bank like us.”

That story, combined with Kim’s background, drew lots of interest from investors, said Keefe Bruyette’s Wishner. He noted that his firm typically wouldn’t work with such a small bank but decided to do so in this case because the firm and big investors knew Kim.

It’s much the same at First Choice, which since last year has been run by Bob Franko, formerly chief executive of Beach Business Bank, which was acquired by another lender.

“Bob Franko at First Choice was able to raise capital and that’s because of him,” Wishner said. “If you’ve done this before and had success, people will invest in you.”