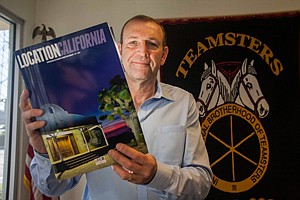 The story of runaway production has been told before: Filmmakers take their business to another state or another country to take advantage of government tax credits that are more generous than what California can offer.

But the California Film Commission – a state-run economic development office in Hollywood – is hoping to create a competing narrative. Last week, the commission unveiled a 100-page glossy magazine, Location California, at the Sundance Film Festival that highlights the diversity of filming locations in the state and the benefits of keeping productions local. The magazine is being distributed to thousands of location scouts and producers. The plan is to publish yearly.

It’s a small but telling gesture from the state, which is trying to stay competitive in a global grab for film and TV jobs fueled by millions of dollars of tax credits. Steve Dayan, chairman at the California Film Commission and head of below-the-line union Teamsters Local 399, said California has to tell its story because the number of states and countries offering financial incentives for productions has increased in recent years.

The magazine has features about movies that have been shot locally, such as Walt Disney Co.’s “Saving Mr. Banks,” along with features about notable locations, including a beach used in “Chasing Mavericks.” Publication was funded by selling ads to the likes of Tejon Ranch, a popular filming location north of Los Angeles that has doubled for locations in the Australian outback and Tuscany, Italy, among many others.

While marketing has the potential to spur local filming, location decisions are ultimately financial, and Dayan noted that California’s tax credit program is the chief component in preventing runaway production. The state offers $100 million in tax incentives for TV and movie productions – scheduled to be doled out by the commission via lottery each year through 2017.

The problem is that other states are able to offer far more money to attract productions. For example, New York offers $420 million a year in production tax credits. Georgia has no cap on its tax credit program.

As a result, filming levels for feature films shot on location in Los Angeles last year were down 50 percent from peak levels in 1996. Local location television shoots were down 38 percent from the peak of 2008, according to non-profit production permitting office FilmL.A. (However, TV and film production days were up year over year.)

The commission decided about a year ago that it was time to step up its marketing efforts. But with no budget for such things, the commission funded the magazine by selling ads to film-related companies, such as soundstages and production equipment rental shops.

“The idea was to highlight and remind people about our wide range of diverse locations, facilities, equipment and talented crew,” said Amy Lemisch, executive director at the commission. “It was produced at no cost to the state.”

The magazine’s editorial content was produced by publisher Boutique Editions of London with direction from the commission. The ads were also sold by Boutique.

In addition to marketing and administering the tax credit program, the commission handles film permitting for state property such as beaches and parks. It also works to promote filming in specific areas by working with local film offices such as FilmL.A.

As other states have stepped up their credit programs, they have also increased their outreach to producers and location scouts. For example, the Georgia Film, Music and Digital Entertainment Office sends staff to Sundance, South by Southwest and other festivals that draw a large number of filmmakers.

The state’s tax credit began in 2005 and has helped attract some big-budget films, including the recent sequels for “Hunger Games” and “Anchorman.” By now, the tax credit is known widely enough that the state doesn’t spend much money marketing the program, said Lee Thomas, director of the Georgia office.

“The people who control the money are aware of the film tax credit,” Thomas said. “Most of our business is repeat business.”

Instead, the commission’s marketing efforts are focused on building a tourism industry that encourages people to visit filming locations from movies such as “Anchorman 2.”

Thomas noted that many productions that come to Georgia had previously tried to get into the California program but did not get drawn in the state tax credit lottery.

Since its inception in 2009, the California tax program has granted credits to about 269 productions that have spent $4.75 billion in the state, Lemisch said. But many productions aren’t eligible, such as movies with budgets of more than $75 million. So those have mostly abandoned filming in Los Angeles and moved elsewhere.

That’s led many advocates, including Dayan, to call for an expanded program that includes tax credits for big-budget features that spend heavily in local communities. Changes to the tax credit legislation will be debated this year.

Dayan said he’s optimistic that the political will has shifted in favor of an expanded tax credit program, due to an improving state budget and the election of film industry advocate Eric Garcetti as mayor of Los Angeles.

Although the state might never match the others dollar for dollar, the California Film Commission is also marketing the less tangible benefits of local shooting, such as sleeping in your home at the end of the day.

After Sundance, the commission will distribute the magazine at other film festivals, as well

as the Association of Film Commissioners International’s locations show in Los Angeles in March – an annual meeting of states and countries that are looking to attract productions that some local film boosters call the poachers conference.

Dayan said it’s time to remind people why the industry has for so long been concentrated around Los Angeles.

“We still have tremendous advantages,” he said. “There are still a lot of good reasons to keep work here. Doing this magazine is a great way to remind people.”