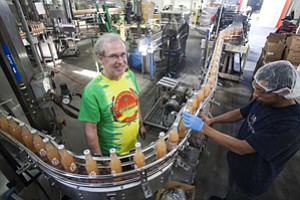 The South L.A. beverage company has been riding the wave of popularity of the vinegary, fermented tea, a brew that helped boost Reed’s sales by $4 million last year.

That momentum carried into the New Year, as the company signed two distribution deals that will put its eight kombucha drinks in supermarkets in New York and throughout the Southeast. The latest deals are part of a drumbeat of distribution contracts that have been signed monthly since it launched the product a year ago.

Together, the deals put its drinks on the shelves of more than 3,000 grocery stores throughout the country, including Kroger Co.’s major supermarkets, and are expected to double the company’s kombucha revenue this year.

But that has led to speculation that the company, which was founded in 1987 and went public in 2006, could be a tempting target for a larger beverage maker looking for a quick entry into the kombucha market.

Gregory P. Garner, director of research at Singular Research in Calabasas, said Reed’s could see its 2012 revenue of $30 million triple in a couple of years on the back of kombucha. It even has the potential to hit $100 million in sales, he said.

Indeed, Chris Reed, the company’s founder and chief executive, said big companies already approach him regularly to discuss an acquisition, including Monster. A call to Monster seeking comment was not returned.

Reed, who with his wife Judy controls 19 percent of the company, said he has no plan to sell – unless it’s a really good deal or one he’s unable to decline.

Shares are listed on the New York Stock Exchange but are thinly traded and no institutions hold a significant stake. That lack of attention has allowed Reed’s to operate largely unfettered. But it has not reported a profitable year yet.

“We believe it will be turning profitable either in the December quarter or in the first half of the 2014,” Garner said.

If Reed’s is to hit that mark it will come largely from the popularity of kombucha.

While the company produces 30 beverages, four candies and three ice creams, kombucha has been its biggest mover recently, and Reed sees room for greater growth.

“It’s not that impressive from a dollar figure,” he said. “We hit about $4 million in (kombucha) sales, and this year we are hoping to go to about $8 million.”

Even at $8 million, it’s still a small share of the kombucha market. Alec Jaslow, analyst at Midtown Partners & Co. in New York, said kombucha generated about $300 million in sales in 2012. The major player is Millennium Products Inc. with its GT brand. Much smaller makers are Hain Celestial Group Inc., High Country Kombucha Inc. and B&R Liquid Adventure’s Búcha Live. Jaslow said while still dominant, GT’s share of the market recently slipped to about 80 percent from 90 percent.

Reed said with $4 million in sales, Reed’s is now the second place in kombucha market, but “there is no real number two. There is a big guy doing it and there are 30 companies that have about $50 million in sales.”

“It’s a pretty well-developed product in the natural channel for quite a few years,” said Chris Mathewson, vice president at Natural/Specialty Sales Inc., a subsidiary of Acosta Sales and Marketing Co. Inc. of Jacksonville, Fla., who worked for Reed’s on the kombucha launch. “Now we are starting to see that attraction take hold in the supermarket channel.”

Reed will focus on marketing kombucha this year. The company has 18 sales and marketing personnel among its 61 employees, but plans to add nine. These people will be in supermarkets showcasing kombucha. Reed’s will also launch awareness campaigns.

Much of the manufacturing work has been done in its 13,000-square-foot factory in Gardena, including private label products for major natural food retailers, a business line developed during the recession to keep the company going.

The private label business accounts for 10 percent of Reed’s sales, but he said it represents a crucial tie with retailers.

“We’ll continue to do private label whether we need to or not, just because of the relationships we built with the largest retailers,” he said. “Do they like your brand there? No. … But when I’m a partner, the whole dynamic just shifts.”