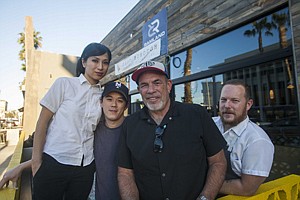 Paul Hibler wants to build a business telling young restaurateurs about his mistakes.

For one, the chairman and co-founder of fast-casual pizza chain Pitfire Artisan Pizza should not have opened a location in the Puente Hills Mall only a year after he started the concept. Hibler admits that the now-closed restaurant did not appeal to the market there.

Hibler is hoping to share some of that hard-earned knowledge with hopeful restaurateurs through his two year-old American Gonzo Food Corp., which helps prep new eateries for success and accelerate existing ones. The culinary incubator, run out of an office converted from a home in Venice, is rolling out one of the first concepts it accelerated, a restaurant named East Borough, in Culver City this month.

His office provides a brainstorming area for his staff and those he helps incubate. But unlike a tech incubator, which often houses budding companies in shared office space, Hibler’s restaurants are run in leased properties he helps find.

Hibler said his company was inspired by the technology incubators in Palo Alto and the nearby Silicon Beach tech scene.

Indeed, the American Gonzo environment fairly screams “tech start-up.” The white walls in the room where Hibler and his staff brainstorm serve as impromptu whiteboards, with flowcharts drawn from ceiling to floor. The room is strewn with guitars and amps; a Stanford football helmet sits on a shelf next to a sofa.

“It fosters creativity. Give me some duct tape and Wonder Bread, and I could get a brand out of this place,” Hibler said. “It took time to have a place and resources like this.”

Hibler and business partners Mike and Tom Tatum, who funded American Gonzo with $3 million, offer more than just creative ideas. They offer their personal expertise, some back-office infrastructure and, most importantly, money to keep a young restaurant afloat.

“Why do they say, 8-out-of-10 or 7-out-of-10 restaurants go (under)?” Hibler said. “Because they’re improperly planned, budgeted and supported. It’s just about fundamentals really. The incubating company is able to provide that structure and keep people safe.”

What he’s doing is very unusual. Though there are incubators in the food industry, many of them operate as central test kitchens that help with the planning phase of a business. Chefs Center of California in Pasadena is one example. Trinity Groves in Dallas is more like the traditional tech incubator, hosting budding eateries on its own campus. That campus also serves as a dining destination for the area.

American Gonzo, however, provides artisanal concepts with a suite of resources throughout its entire development. The goal is to turn them into brands in their outside location.

Christopher Harrer, an adjunct professor with the Lloyd Greif Center for Entrepreneurial Studies at the USC Marshall School of Business, said Hibler’s business model is an innovative one.

“He’s helping them execute at whatever location the restaurant ends up at,” Harrer said. “I would, as a new restaurateur, benefit from knowledge of current market conditions.”

East Borough, which is a Vietnamese sandwich shop, first started in 2010 in Costa Mesa. Owners John Cao and Chef Chloe Tran met Hibler through Cao’s landlord several years ago. Cao was looking for investors to help grow his restaurant and Hibler saw an opportunity to bring the restaurant to Los Angeles – with a twist.

The Costa Mesa location is a sandwich store that mainly sells lunch items, such as the specialty sandwiches called banh mi. With the help of Hibler and his staff, the Culver City location will be a full-service restaurant.

“We were taking a simple Vietnamese sandwich shop and making a Pitfire version of it,” Hibler said. “We could add a sexier dinner part and alcohol program and still keep the banh mi.”

The end goal, Hibler said, is to eventually have concepts like East Borough become full-fledged brands with multiple locations under the American Gonzo banner. Hibler said his incubator differs from most restaurant groups because he is trying to establish a stable of brands rather than a series of one-off concepts.

“I’m collaborating with them,” Hibler said. “But I’m trying to make it their vision, not mine.”

In addition to money, Pitfire’s accounting, marketing, payroll, human resources and design departments all participate in the process. Hibler had Chef Jason Neroni from his Superba Snack Bar help East Borough with its food program.

Hibler said he tries to hang back a little when helping young concepts evolve, allowing their operators be in control of actually running their restaurants.

“You want to keep them on edge and that’s where many of the great ideas come from,” Hibler said. “You always want to push them. We’re always there to make sure they’re OK. But I believe for a good restaurant, there needs to be struggle.”

The expectation is that Cao and Tran will focus on their expertise while Hibler and his group assist in managing the backbone of the company.

“What American Gonzo was able to do was provide an infrastructure to help us as operators to do what we’re good at,” Cao said. “It’s good not worrying about doing payroll and accounting yourself.”

Hibler doesn’t charge a set fee for his services. American Gonzo instead takes an equity position and makes money through a percentage of the incubated restaurant’s sales. He wouldn’t say how much of a percentage he takes but characterized his share as “fair.”

“I know what it’s like to be them. So I want to give them their best shot at success,” Hibler said. “What I’m selling them is I’m going to accelerate them. What would take them five years to get a second restaurant will take two with me.”

Incubators typically make money by taking an equity stake in their protégé companies because in most cases those businesses are too small to afford the services provided. Of course, incubators run the risk of not getting any return if a company fails. Hibler’s operation is similar.

The idea for an incubator came up about three years ago when Hibler wanted to create Superba.

Rather than starting from scratch and assembling a brand new team, Hibler said he realized that he could use his personnel from Pitfire, which was stable enough that he could afford to have employees work on different projects. So his staff helped him launch Superba Snack Bar in 2012; a Superba Food and Bread will launch next month.

“I incubated myself with Superba,” Hibler said.

Hibler said he projected his eight Pitfire stores along with the East Borough and Superba stores would generate $50 million in revenue by the end of next year. Pitfire has 370 employees.

While creating Superba, Hibler said he felt that he could also extend his resources to outside ventures, such as Cao and Tran’s East Borough. Hibler said he has five other unnamed projects in various stages of development – some in the planning stage.

Hibler, who hand picks the restaurants he will help grow, wants to keep the number of projects he’s working on low in hopes of keeping each project “authentic.”

In addition to helping others achieve their dreams, having more concepts under American Gonzo helps expands Hibler’s buying power for his own ventures. The restaurants he incubates have access to his longtime vendors. The startups benefit from lower costs because of Pitfire and Superba’s buying power. Also, Hibler’s ventures extend their own buying power as vendors move more product. That encompasses everything from food to insurance.

“They’re all part of the same deal. It’s smart,” said Hibler. “It helps everyone, it helps Pitfire.”

Cao, whose restaurant requires ingredients different from those used at Pitfire and Superba, said the buying power of Pitfire helps because vendors such as LA Specialty are more inclined to put more effort in finding the right ingredients for East Borough.

“It’s a better way of doing business,” Cao said. “Having that established relationship with them, you have better buying power and better rates.”

The model came naturally to Hibler, 55, who studied international economics at Stanford. Still, it took a long time to learn what worked and didn’t before he hit the right recipe.

His family ran restaurants, and he was always a passionate cook. When he was 24 he decided to sign up as an extra for John Cusack film “The Sure Thing.” On set, Hibler became intrigued with movie catering and started his own catering business shortly after.

After his business catered on the set of “Titanic,” Hibler had enough money to start Pitfire in 1997. He took the Puente Hills offer a year later because developers offered him a great deal and one of the best locations in the mall. The failure came despite all that.

And he’s made other mistakes. Once he licensed his name to a different operator for another seemingly great deal, but the operator did not run the brand to his standards.

“The things I learned and paid dearly for were fundamental things,” Hibler said.

Hibler said fundamentals such as financial and market knowledge may not be the most attractive aspects to budding restaurateurs, but they are important.

That focus – finding authenticity in something that may not seem appealing – is how he came up with the name American Gonzo, based on an expression used to describe a journalist popular in the 1960s and ’70s.

“If you know anything about Hunter S. Thompson, you might understand,” Hibler said. “It might not be all that pretty, but we’re after the truth.”