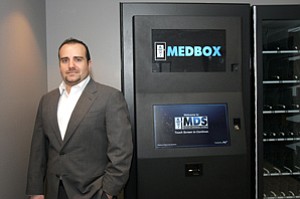 On Tuesday, Jan. 7, at 7:02 a.m., the price of a share of obscure West Hollywood company Medbox Inc. hit $52.50. At that moment, Los Angeles County gained a new billionaire – for a while, anyway.

For the rest of that day and most of the next, Medbox founder Pejman Vincent Mehdizadeh’s huge stake in the tiny company, which makes marijuana dispensing machines, was worth upwards of $1 billion.

Four years ago, he was bankrupt. Now, the 35-year-old son of Iranian emigrants is the first person in the United States – maybe anywhere – to legally build a billion-dollar fortune in the cannabis business, if only on paper.

“I’m officially a billionaire,” he wrote in an email to the Business Journal that Tuesday. “What an amazing situation I find myself in.”

Amazing for a few reasons. For starters, Medbox reported net income of just $388,000 last year. And then there’s Mehdizadeh himself. He has a history of business failures and several criminal convictions, and says he plans to take a less active role in Medbox because his record is a black eye for the company.

Medbox and other pot-related stocks have been on an upward ride for more than a year as more states have legalized marijuana for medicinal or even recreational use. For example, shares of Growlife Inc., a Gardena company that sells equipment for growing marijuana indoors, have typically traded for less than a nickel but closed Jan. 8 at 35 cents.

Mehdizadeh acknowledged that there’s a gulf between Medbox’s financials and its stock valuation, but he’s also enjoying the trip and has even changed the name of his soon-to-be-released memoir to call himself a billionaire rather than a mere multimillionaire.

Mehdizadeh founded Medbox in 2010. The company makes machines that store and dole out premeasured doses of marijuana. The machines, used in dispensaries, help prevent employee theft.

Mehdizadeh is the company’s chairman, chief operating officer and largest shareholder. He holds 19.2 million shares of Medbox, or about 65 percent of the company. (That includes convertible preferred shares.) The stock is traded on the over-the-counter markets.

His memoir, now called “Self-Made: How I Became a Billionaire in the Legal Marijuana Industry Without Selling a Gram,” will be released sometime in the next few months, he said, with proceeds going to charity. Mehdizadeh said the book, which will be self-published on iTunes, will detail “my trials and tribulations up to this point.”

He has no shortage of those.

Mehdizadeh was born in Iran on Christmas Day 1978, just weeks before the Iranian revolution came to a head. His father, Parviz, was a government official under the shah of Iran. The family fled to the United States in January 1979 and settled near Beverly Hills.

His father was an insurance agent and later started a business referring clients to attorneys. When Mehdizadeh was 18, the family lost money on a series of real estate investments. Instead of going to college as planned, Mehdizadeh helped run the lawyer referral business and took classes in political science at Santa Monica College.

About that same time, in 1997, he was convicted of grand theft, according to records from the Los Angeles Superior Court. Since then, court records show, he’s been convicted of intent to defraud, trespassing, driving without a license and loitering with intent to solicit prostitution.

Last year, he pleaded no contest to two theft charges in a deal that wiped out 13 charges of grand theft, all related to his management of a law firm between 2005 and 2008.

Mehdizadeh said he didn’t do anything wrong, but that he was left holding the bag after the attorney whose office he managed abruptly retired, leaving clients without representation. He said he accepted a plea deal to spare bad press for Medbox.

“I could have taken the case to trial and won,” he said, “but I had a company to worry about.”

“All were nonjail offenses,” he said, and happened years ago.

Another problem: Mehdizadeh bought a house in Lake Hollywood in 2007 that he said he later discovered had mold problems. He spent $70,000 to clean up the mold and then lost the house anyway when the law office he managed closed.

His next venture was operating two medical marijuana dispensaries. Other than giving him the idea for Medbox, those businesses didn’t last – hence his claim that he got rich without selling a gram. After six months, he said that he decided the business was too wild for him. He sold the clinics, and was later sued by the buyer, who claimed Mehdizadeh had misrepresented himself and the deal. Part of that case was settled out of court, though some issues remain unresolved, an attorney for the plaintiff said.

Much of Mehdizadeh’s history first came to light in September in a story by Roddy Boyd, a financial journalist who writes for the Southern Investigative Reporting Foundation, a North Carolina non-profit organization.

Mehdizadeh, in a Medbox press release, called the story a hit piece filled with half-truths and outright fabrications. He told the Business Journal he’s planning to sue Boyd for defamation.

Paul Conant, a Phoenix attorney who has represented Mehdizadeh and Medbox, said nothing has been filed against Boyd but that he and Mehdizadeh are working on a case.

Mehdizadeh, when pressed by the Business Journal about some of the points in Boyd’s article and about his criminal record, declined to answer additional questions and canceled a photo shoot. (The photos accompanying this article were taken in January 2012.)

But in a telephone interview earlier last week, Mehdizadeh said he realizes his history of criminal convictions and civil suits makes him a hindrance to the company. He plans to step down from his chief operating officer position within the year, though he intends to remain chairman.

“While I’m the key strategist for this company and brought this company to where it is, I clearly am also a weakness because of my checkered past,” he said. “I want what’s best for the company. Bringing in seasoned executives with public company experience is what I think the investors deserve.”

He also said more experienced managers are necessary as Medbox continues to grow. He expects last year’s revenue to total about $6 million, up from $4.5 million the year before. The company now offers consulting services for clients who want to operate marijuana dispensaries, helping them obtain permits and then selling them Medbox equipment.

And within the next few months, Mehdizadeh said Medbox will become a fully reporting company, filing regular reports with the Securities and Exchange Commission. (The company now releases unaudited financial statements on its website, but is small enough that it does not have to file with the SEC.)

Medbox filed and withdrew an application to become fully reporting last year, but Mehdizadeh said a new application will be filed this week.

Though he said he plans to step down, Mehdizadeh said he’s never done anything wrong at Medbox – and that he deserves credit for building a billion-dollar company, but not the blame for previous failures.

“All I can do is run a solid company, and that’s what I’ve been doing,” he said. “This is the first business venture where I am in complete control over how clients are treated. I didn’t have that luxury with the law office I managed for the attorney who retired. I’ve never had a business of my own before that I was in complete control of. I’ve done a good job.”

On Jan. 9, Medbox shares closed at $43.25, valuing Mehdizadeh’s stake at $831 million. Not a billionaire, but still rich enough to rank among the 50 Wealthiest Angelenos.