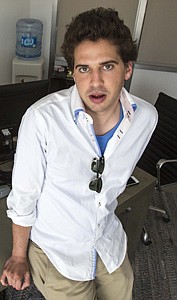 App maker Whisper Inc. rang in the new year by making a high-profile hire and signaling a new initiative for the company.

Neetzan Zimmerman, described by the Wall Street Journal as the “viral genius” of Gawker, is leaving the blog network to join Whisper at the end of the month. Gawker’s editors first announced Zimmerman’s departure on Twitter, and a source later confirmed it was Whisper that had lured him away.

So far, details are sparse about his new role at the Santa Monica company. Zimmerman declined to elaborate in several media interviews and a statement from Whisper Chief Executive Michael Heyward confirmed the hire but did not provide additional details.

The app, with which users anonymously share messages in a public forum, has long been rumored to be exploring new outlets for its posts. The typical message on the app is a confessional; “I’m afraid I’m losing my best friend” reads a recent one. Some observers of the company have floated the possibility that these posts could provide supplementary content for other site’s articles.

In Zimmerman, Whisper has picked up a writer with remarkable success in generating traffic. His articles on Gawker routinely crossed 1 million views and were responsible for almost half of the network’s entire traffic, according to a chart from Business Insider.

Whisper has shown impressive traffic itself over the past year. When the Business Journal profiled the company April 2013, it boasted 1.5 billion pages views a month. Executives said that by the end of the year monthly views were nearing 3 billion.

Whisper’s news follows another high-profile staff poaching for a local app company. Late last year, Snapchat Inc. in Venice brought in Emily White to serve as the company’s chief operating officer. White had been an executive at Facebook Inc., where she was leading the push to monetize Instagram, its popular photo app.

The life of any startup comes with a definite end point, but most don’t expect it to arrive soon after launch.

Such is the case with Pasadena’s Crashworks Inc., maker of a free city-guide app for iPhones. The company was acquired at the end of December by downtown L.A.’s Oversee.net, 10 months after going live with the backing of seed money from Pasadena incubator Idealab.

It was a bittersweet ending for Crash’s founder and sole employee, Erick Laubach.

The former Ticketmaster executive developed the app to provide a photo-based guide to a city’s sites, attractions and public art. Its first featured city was Los Angeles, where Laubach himself took photos of 500 spots, including sites along the Los Angeles River and Venice.

Laubach said Crash topped at 18,000 downloads and wasn’t close to generating any revenue. He hoped to keep the company running, but the seed money ran out in April and no investors were interested in throwing in for a Series A round.

“People were nervous about scale. It was a question about how you monetize without millions of users,” Laubach said. “There wasn’t a traditional business model and that was the biggest hiccup.”

He wouldn’t disclose the exact price of the acquisition, but put the figure “below $1 million,” enough to recoup the initial investment.

Oversee, which began as an online marketing and lead-generation company but has since branched into app development, is folding Crash into its new online travel service, WanderWe. Crash will serve as the foundation of WanderWe’s forthcoming iOS app.

Loveroom, a site that pitched itself as an “Airbnb for attractive people,” is somewhat controversial and probably overexposed.

Those descriptors, of course, are catnip for reality television, and so it feels preordained that Loveroom would be courted by production companies.

Lo and behold, Loveroom co-founder Josh Bocanegra said his company is deep in negotiations for a TV development deal with Brian Graden, a former president of programming at MTV Networks.

Bocanegra wouldn’t reveal too much about the prospective show’s details, other than that it would be centered on dating and would feature members of the Loveroom community. A spokeswoman for Graden declined comment.

Things are still early, but Bocanegra said that he’s already reached out to some of the site’s most active members to appear.

Events have moved swiftly for the Holly-wood company since it launched the online service where people rent out extra rooms (or beds) to potential boarders based on how attractive they find them. Since November, the site has racked up 8,500 members around the world, according to Bocanegra.