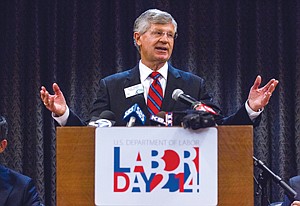 Years after failing to block a city of L.A. ordinance requiring higher pay for workers at airport-area hotels, the hotel industry is trying a new tactic to stop a similar law that requires large hotels citywide to pay higher wages.

This time around, hotel owners are arguing the new ordinance, which would require large hotels to pay workers $15.37 an hour, violates the National Labor Relations Act because it allows exemptions for unionized hotels – a sharply different argument than the one hotel groups made when battling the Los Angeles International Airport-area wage rule.

Two national hotel associations last week filed a lawsuit in federal court, contending that by allowing union hotels to seek waivers from the higher wages, the city ordinance changes the economic balance of power in labor negotiations and that violates the labor act.

Labor unions have long insisted on putting such exemption provisions in wage mandates enacted by local governments, claiming that the mandates would disrupt previously negotiated union contracts. But critics in the business community say the exemptions are meant to force nonunion employers to accept union organizing efforts and they point to at least six Los Angeles County hotels that have gone union since new living-wage ordinances were enacted.

“If this lawsuit prevails, this leverage that unions have recently started using, they would no longer have,” said Gary Toebben, chief executive of the Los Angeles Area Chamber of Commerce.

This strategy represents a departure from hotel efforts several years ago to block a city living-wage law targeting 13 airport-area hotels. Those challenges were made in state courts, one on procedural grounds and the other questioning the city’s authority to regulate businesses with no direct contractual relations with the city. State appellate courts rejected both arguments.

The current hotel minimum-wage ordinance, which passed the City Council in October on an 11-2 vote, is estimated to cover about 70 large hotels in the city. Starting in July, hotels with more than 300 rooms must pay workers the higher minimum wage; in July 2016, the measure kicks in for hotels with between 150 and 300 rooms.

Given the unsuccessful track record of previous challenges, the hotel groups figured they would need a new tack. And challenging the union hotel exemption is a novel strategy.

“It’s the first time this approach is being taken and it’s probably the strongest argument the hotels have to block this law,” said Dana Kravetz, managing partner of the Encino corporate law firm of Michelman and Robinson.

The lawsuit, filed by the American Hotel & Lodging Association of Washington D.C. and the Asian-American Hotel Owners Association of Atlanta, contends that by allowing unionized hotels to pay lower wages, the ordinance is in effect providing an economic incentive for nonunion hotels to not oppose their workers joining the Unite HERE hotel and restaurant workers union.

“The city’s ordinance is clearly designed to put a thumb on the scale in favor of labor and disrupts the careful balance between labor and management,” Katherine Lugar, chief executive of the American Hotel & Lodging Association, said at a press conference last week at the federal courthouse in downtown Los Angeles..

“This $15.37 wage is so much of a jump from the current $9 an hour state minimum that there’s plenty of room for union contract wage levels to be higher than the state minimum but significantly lower than $15.37,” Kravetz said.

In their arguments, hotel industry lawyers are likely to point to the six hotels that have already gone union since living-wage mandates were adopted – five in the zone around LAX and one in Long Beach, which has its own higher-wage mandate with a union exemption.

The hotels that have unionized in the wake of living-wage ordinances include a Holiday Inn and Westin hotels near LAX and the Hyatt Regency Long Beach.

Randy Gordon, chief executive of the Long Beach Area Chamber of Commerce, said if hotel industry groups are successful in their lawsuit challenging the L.A. ordinance, hotels in Long Beach would likely consider a similar challenge to that city’s ordinance.

Ordinance supporters say federal law not only allows for exemptions for hotels with collective-bargaining agreements, but in essence requires them. James Elmendorf, deputy director for the Los Angeles Alliance for a New Economy – a union-allied organization that helped craft the L.A. ordinance and pushed for its passage – said that in a previous decision, the U.S. Supreme Court recommended that local and state laws and regulations of private businesses contain such exemptions.

“That’s the reason cities across the country, including Los Angeles, often include such language in minimum-wage ordinances,” he said.