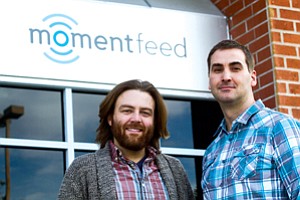 Disneyland has long dubbed itself the “Happiest Place on Earth.” But being happy sometimes isn’t quite enough, and so the granddaddy of all theme parks tapped Santa Monica mobile marketing company MomentFeed, which helps it take advantage of being the most “geotagged” place on Earth in 2014.

That’s according to rankings released by Instagram earlier this month. When you consider that Instagram, owned by Facebook Inc., has more than 300 million users worldwide – a bigger base than Twitter – that ranking represents more than just a feather in Mickey’s cap.

“User-generated content is kind of the holy grail of marketing these days,” said Rebecca Markarian, who has handled campaigns for Microsoft Corp.’s Xbox division as vice president of social media at Pasadena ad agency Ayzenberg Group.

As part of its work with Walt Disney Co., MomentFeed helped the entertainment giant maximize its Instagram feed by mining the service for photos taken at all of its parks that have been geotagged, or given an electronic marker that pinpoints the location. MomentFeed’s service also looks for relevant hashtags.

In its two years of work with the studio, MomentFeed said its platform has pulled in 2.6 million photos, many of which would have previously gone unseen by Disney’s social media team due to the wide variety of hashtags and geotags used by visitors. For instance, one person might tag themselves at Splash Mountain or Pirates of the Caribbean in a particular photo rather than at the Anaheim park generally.

All that information now flowing to Disney allowed it to crowdsource its entire Instagram feed rather than posting its own content, according to MomentFeed. As a result, Disney hasn’t posted a single original photo on its feed in a year and a half. Instead, it finds interesting photos being taken at the park and asks the photographer for permission to “regram” the photo on its account. Disney also credits the user who took the photo in its posts.

In the first six months it employed the strategy, the Disneyland Instagram audience grew by 360 percent to more than 250,000 followers from fewer than 70,000, according to numbers released last year by MomentFeed.

“We really emphasize the value of user-generated content,” said Craig McKenna, vice president of client services at MomentFeed. “When you combine the hashtag with a place tag … you’re listening to people actually having an experience with your brand.”

Executives as Disney, headquartered in Burbank, declined to be interviewed for this story.

After reviewing Instagram’s terms of use, Korn said he couldn’t find any language that gave one user the right to use another person’s photo without consent.

“I don’t see anything in the terms of use that would license other Instagram users to repost images. My preliminary view is it would be infringing (on copyright),” Korn said, who acknowledged that case law in this area varies.

But if Disney ever wanted to use the photos for other marketing purposes, such as on printed materials, Korn said the studio would be wise to ask for further consent.

“They would need to be clear with the artist about what the scope of the use is,” he explained.

While MomentFeed said it doesn’t employ any proprietary technology to provide its services, McKenna was otherwise mum on how it all works.

The company also provides the same service for the studio’s Disney Store locations, and it has worked with L.A.’s International Coffee & Tea, parent of Coffee Bean & Tea Leaf, to help its team identify Instagram photos being taken at each of its stores.

In addition to tracking geotags, the company also aids retail brands looking to enhance their presence on other social media platforms such as Facebook, Twitter and Foursquare. It provides them with a Web dashboard to manage their accounts that includes comprehensive analytics from each store.

MomentFeed also offers a location data management service that companies can use to ensure the information that shows up in online searches for each of its retail stores is accurate.

Many retailers use technologies such as Apple Inc.’s iBeacon platform that pinpoint when consumers are engaged physically or digitally with their products or locations. Through the platforms, they are able to offer coupons and deals to customers in their stores.

That opportunity is there for Disney, too, though the company appears not yet ready to take that plunge.

“I think the whole world is trying to figure out where that’s appropriate and where that’s a little creepy,” said Kevin Murray, a senior account manager at MomentFeed who works with Disney.

“It’s probably too much, too soon in almost every case,” she said. “Social media is much more about inspiring engagement. It’s not as much about driving direct purchases. You really have to pick those moments carefully.”