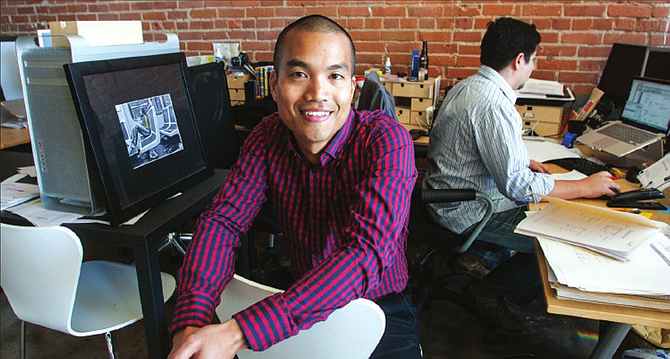 When Darius Fong, a Grammy Award-winning audio engineer, went looking for seed funding for his Culver City startup WeeSpin, he didn’t turn to the Silicon Beach investors who have helped fuel the region’s booming tech scene. And he didn’t look to the Bay Area or New York, either.

Instead, he pitched his 10,000-user mobile app, which launched in October as a “Pinterest for music” where users share customized playlists, to a group of angel investors in Hong Kong. Though he won’t say how much he raised, Fong, who left Hong Kong 14 years ago, was looking for $750,000. In the end, he pulled investments from seven Hong Kong funders and an additional four in the United States.

Fong isn’t alone among L.A. entrepreneurs who are relying on Asian investments for early stage funding.

The backers of WeeSpin include Andy Ann of digital media marketing firm NDN Group, a Goldman Sachs banker and a managing partner at investment firm BlackPine Zheng He Capital Management. All are based in Hong Kong.

The appeal of acting as an angel to a U.S. startup says as much about the vibrancy of the market here as it does uncertainty at home. China’s tech scene is still relatively new, which makes homegrown companies less predictable and ultimately less appealing to investors.

And the fast-growing economy in China has also become so competitive that high returns are elusive, said Dan Chen, managing director at Santa Monica venture capital firm Wavemaker Partners. Why not, then, invest in a U.S. company that gives the same return as it would in China, but with additional perks?

“If you invest in a company in the United States, most would say it’s safer, the legal status is more established, there’s better talent and better prospects for an exit,” Chen said.

“There’s a growing class of Chinese investors who want to put their capital to work and view the American market as attractive,” he said.

Professional networks in Asia are based in large part on personal relationships. Asian angels rely on familiar faces when looking to diversify their portfolios. And for startups, these angel investments help them bide time before making the big pitch to traditional VCs.

For now, Fong said he was content with his network as he looks for more funding from across the Pacific and he’s sure he doesn’t want to go the VC route yet.

“You get one chance to make your case,” he said. “Any social media network going to a VC with 10,000 users is a lost cause.”

Among those who have backed Fong is Hong Kong entrepreneur Jonathan Tam. One of WeeSpin’s angel investors, Tam said American companies should look abroad for funding if they want to tap into growing markets such as in China and India.

“You should want to have Asian investors on your side to advise you and give you access,” he said via Skype.

Tam, a family friend of Fong’s who was born and raised in Hong Kong and educated at Brown University, would not be specific about how much he invested in WeeSpin other than to say it was less than $50,000.

For SchooLinks founder and Chief Executive Katie Fang, her angel investors are even closer to home – kind of. Her parents own and operate Honics, a Shanghai security network company, and provided her startup’s seed funding. They also used their connections with government officials to accelerate paperwork and establish a SchooLinks office in Shanghai, a cumbersome process that would typically take months or even years.

That kind of angel asset was invaluable for SchooLinks, whose university recruitment site is primarily targeting Chinese students who want to attend schools abroad.

Fang said a couple of VC firms, such as Summit Partners in Menlo Park and Dan Fund in Dallas, have already reached out about raising a Series A round, but, like Fong, she’s not interested at the moment. Her parents’ investment is enough to support current operations.

“We’re not that tight on cash,” she said.

And VC money could limit the valuation of her early stage startup.

That’s the same reason why WeeSpin’s Fong is once again tapping into his angel network to secure additional seed funding. He plans to approach traditional VCs late next year when he feels his company will have the right traction to make it an easy sell.

“The lowest valuation (for social media startups) that VCs are looking for is $9 million,” Fong said. “We’re probably at $6 million or $7 million, which is not far off. But the higher value, the better.”