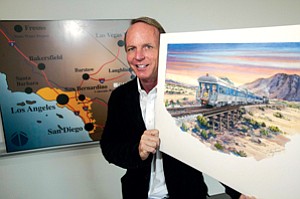 Cadiz Inc., an L.A. company that plans to store and sell billions of gallons of water beneath its desert land holdings, lacks a major component for its bold plan: a pipeline to take the water from its desert aquifer to market.

But that pipeline has moved closer to reality, thanks to a recent federal government memo that could allow Cadiz to build the pipeline alongside railroad tracks.

That could prove crucial to the company because project opponents are trying to get the federal government to launch a full environmental review of the water project, which they claim could deplete the aquifer and destroy desert habitat. The project has already won approval under state environmental rules and has been upheld in court. A federal review might be the last chance opponents have to stop the project.

Cadiz has been trying for nearly a quarter-century to push through a plan to store and pump water from its holdings in the Cadiz Valley east of the Twentynine Palms Marine Corps base. The water would then be transferred via pipeline to the Colorado River Aqueduct and ultimately sold to several local water agencies and utilities. In May, Cadiz cleared a major hurdle when a state court judge threw out the remaining lawsuits against the project.

The day Cadiz issued a press release on the Bureau of Land Management memo – Aug. 13 – shares of the company shot up 12 percent on the Nasdaq exchange to close at $10.44. Shares continued climbing after that. The company was one of the biggest gainers on last week’s LABJ Index, rising 13 percent for the week ended Aug. 20 to close at $11.79. (See page 56.)

“Now that the BLM has its long-awaited framework and because we are the only application presently before the BLM, we expect they should be in a position to finalize a determination in a reasonable amount of time,” Scott Slater, Cadiz chief executive, told the Business Journal last week.

The memo from the bureau lays out guidelines to implement a 2011 ruling for projects in a railroad right-of-way. Under the guidelines, so long as the Cadiz pipeline “serves the purpose of the railroad,” no action from the bureau is required. If the bureau determines the pipeline does not serve the purpose of the railroad, then Cadiz would need authorization from the agency. That is when an environmental review might be ordered.

Slater believes Cadiz has a good chance at getting a favorable determination from the bureau. That’s because Cadiz has come up with a plan that it believes will ensure the pipeline serves the railroad: the development of a steam-powered tourist train.

Six years ago, Cadiz inked a deal with Arizona & California Railroad Co. for use of a right-of-way alongside a rarely used 85-mile rail line between the Cadiz Valley and the Arizona-California border. The rail line crosses the Colorado River Aqueduct. Cadiz plans to build a 7-foot diameter pipeline in that right-of-way to convey water from its aquifer to the aqueduct.

In September, Cadiz inked another deal with the railroad for use of the rail line itself. Cadiz executives then announced plans for steam train service for tourists along at least a portion of that line. Steam engines require emergency supplies of water along their route, which would be supplied from the pipeline, thereby making the pipeline essential for the railroad.

“We believe there is no question that under applicable law, the pipeline installation and operation will further railroad purposes,” Slater said.

The memo also lays out a time line: The agency will start considering projects in railroad rights-of-way six months after the guidelines are published in the Federal Register. The publication is expected in the next few weeks. As of last week, the Cadiz project was the only application pending before the agency. All of this implies a decision could come soon.

Slater also noted that he joined other Cadiz executives in ringing the opening bell on Nasdaq the day before the bureau’s memo. That exposure might have contributed to the boost in the company’s share price, he said.

“Installing fire hydrants along the railroad right-of-way and washing steam train cars doesn’t further the purpose of a railroad,” said Seth Shteir, California desert senior representative for the National Parks Conservation Association, an Arlington, Va., advocacy group opposed to the Cadiz water project “These are concocted reasons for Cadiz not having to comply with federal regulation.”