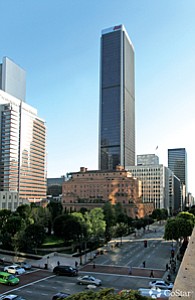 Aon Center, the second-tallest building in Los Angeles – and the state – is close to being sold for about $270 million.

The 62-story tower at 707 Wilshire Blvd. in downtown Los Angeles is expected to be purchased by San Francisco’s Shorenstein Properties later this year, according to sources with knowledge of the deal. The seller, Beacon Capital Group of Boston, selected Shorenstein earlier this month after reviewing several offers. Shorenstein is said to be going through its due-diligence process before paying a nonrefundable deposit on the property.

At about $245 a square foot, the sale of the Class A, 1.1 million-square-foot office tower would be a loss for Beacon, which originally purchased the 40-year-old building at the height of the market in 2007 for $330 million, or nearly $300 a square foot. While the price has dropped significantly, so too has occupancy. In 2007, the building was more than 90 percent full, according to real estate data provider CoStar Group Inc. Today it’s at barely 60 percent.

Arty Maharajh, a vice president of research in the downtown L.A. office of Cassidy Turley, which was not involved in the deal, said Beacon had been trying to sell the building for at least three years but had trouble finding a buyer willing to spend close to $300 a foot for it.

“Around 2010 or 2011, they marketed it but they didn’t get the price they wanted so they pulled it off the market,” he said.

The sale would mark the second downtown purchase by Shorenstein this year. In April, the company paid $37 million for a portfolio of three old industrial buildings in the Arts District that once housed a Ford Motor Co. factory.

Built in 2003, the 48 units in the four-story Palermo building at the southwest corner of Green and Fair Oaks Avenue feature granite countertops, and in-unit washers and dryers. Some units feature loft ceilings and mountain views. The 43 units in the neighboring five-story Messina building have similar features but also include access to a rooftop lounge and barbeque area. The apartments in the two buildings are mostly a mix of one- and two-bedroom units that rent for an average of $2,000 and $2,500, respectively. The retail component of the property was more than 80 percent leased at the time of sale, including to the Japanese restaurant chain Gyu-Kaku and furniture showroom Design Within Reach. Two spaces totaling about 4,000 square feet remain vacant.

Ron Harris, executive vice president at Marcus & Millichap division Institutional Property Advisors, represented the seller. He said he received 16 offers for the property – 14 from institutional investors and two from private parties. In the end, one of the private investors won out.

“The buyer’s pricing was competitive but also showed the most passion and intensity in terms of the offer,” he said.

Runway at Playa Vista, a massive retail development under construction in the master-planned Westside community, announced last week that it has signed eight more retail tenants to occupy space in the 11-acre project, bringing the total number of committed commercial tenants to 17.

These tenants join a roster of nine others that have already been announced for the project, including anchors such as grocery retailer Whole Foods Market Inc. and movie chain Cinemark Theaters. Restaurants Lyfe Kitchen, Panini Café, Hopdoddy Burger Bar and Sol Cocina have also already signed leases.

Together, all 17 future tenants account for about 62 percent of the retail space being developed at Runway.

CBRE Group Inc.’s Zachary Card, who is leading leasing efforts on behalf of developers Lincoln Property Co., Phoenix Property Co. and Paragon Commercial Group, said an additional 25,000 square feet is under review by serious potential tenants, including soft-goods retailers. That would leave about 57,000 square feet remaining to be leased.

Construction on the project, which includes 420 residential units and 30,000 square feet of office space, is expected to be completed early next year. Many retailers, however, anticipate opening in advance of the upcoming holiday shopping season.