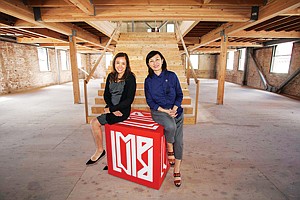 Long Beach incubator Imprint Venture Lab took its first portfolio company, Knockaround Sunglasses, from a one-man operation in a San Diego garage to $1 million a month in sales in less than four years.

Imprint’s Julia Y. Huang and Tanya Raukko are now looking for their next success story – a company that makes physical goods and not digital products. So they’re targeting such businesses as apparel and household appliances, looking for the next Armani, not the next Zuckerberg.

“We focus on creative and design entities, which is a little different than other seed funds,” said Huang, chief executive.

Huang and Raukko are using the methods of high-tech investors to develop companies in low-tech industries.

“When you look at the landscape, everybody is so concentrated on tech,” said Raukko, Imprint’s managing director. “So many accelerators play in that space. We want to help founders that don’t get noticed by the typical accelerators.”

The company is about to raise its third fund and is also getting ready to move from offices in a downtown Long Beach high-rise to new headquarters nearby, where workers are now completing renovations.

Huang and Raukko are looking for consumer startups that are not just solid businesses but have the potential to become household names. The mission statement on Imprint’s website defines its goal as no less than “creating iconic brands.”

But Denise Lee Yohn, a San Diego brand expert familiar with Knockaround’s success, said that’s the reverse of how companies typically develop product lines. Most companies start out trying to be interesting and different and become iconic over time as a result.

“It’s a little unusual for a company from the very beginning to make that their target,” she said.

Most VC firms are run by men; the Business Journal couldn’t find any others in Los Angeles with two women co-founders. Huang was a project planner for American Standard Cos. Inc., which made toilet bowls, before founding Long Beach public relations firm InterTrend, which she still owns. Raukko worked as a film and technology analyst prior to joining InterTrend in 2004.

About seven years ago, Huang started a conference company as a side business to her PR firm. She soon dropped that line but the informal conversations with clients at the conferences gave her and Raukko the idea to form an incubator.

“We thought it would be a great experiment,” Raukko said.

In 2009, Imprint raised its first fund of just $200,000 from clients and friends in Asia, and hit it big after making Knockaround its initial investment. Its second fund cleared the $1 million mark, and Imprint is in the process of raising a third, which Huang hopes will exceed $3 million and close by late summer.

After the 2010 investment in Knockaround, Imprint funded Omhu, a Danish manufacturer of ergonomic walking sticks, which was sold to Palo Alto health care firm Sabi. The exit was profitable for Imprint, the company said. Another investment is Becomb, an L.A. company that makes bracelets that look like watches.

“The metrics and milestones are a little different in our space,” said Raukko. “You can’t apply the same hard multiples and fast exits. That’s something that we communicate actively to our investors.”

Most incubators, such as Santa Monica’s MuckerLab and Amplify.la in Venice, scatter seed money across a range of startups with the hope of some hits, Imprint’s strategy requires a narrower focus and deep commitment.

“This is about building a brand that’s sustainable over time and not just an 18-month to two-year exit,” Raukko said.

To match the high bar set by their first portfolio company, Huang and Raukko are looking to track down the next superstar designer.

“It boils down to the founders,” said Raukko. “We always allow our founders to lead the creative vision of the company and we don’t intrude too much.”

One thing that’s required is rapport, however.

“We really, really need to like each other,” said Huang. “We have given up on investments in brilliant ideas we felt very passionate about because the chemistry between us and the founder wasn’t there.”

Knockaround company ultimately succeeded because customers wanted its sunglasses most of which sell for less than $20.

“Today’s customers are quite savvy,” said Yohn, the brand expert. “If it’s all veneer and your product really is the same as everyone else’s, I think that people will soon find you out. There needs to be something that’s distinctive.”

As they look for the next business, Huang, Raukko and their team are tapping their network of clients, friends and employees in search of more entrepreneurs with star quality who just need a little seed money and guidance. Sometimes that part can be as much therapy as strategic planning, but that’s the way they like it.

“We sit in their garages and go through the whole set of emotions with them,” Raukko said. “We hash out everything. That’s probably the most fun and invigorating part of the whole process.”