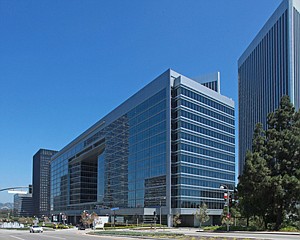 The owners of the Century Park office campus, perhaps the region’s most recognizable real estate outside of downtown Los Angeles, have put the trophy property up for sale.

Entertainment Center, a limited liability corporation advised by J.P. Morgan Asset Management, is marketing the site, home to the headquarters of Creative Artists Agency and the twin Century Plaza Towers, for more than $2 billion.

The property has been quietly marketed since early August, according to a source familiar with the offering.

Lisa St. John, a principal at L.A. Realty Partners whose offices are in one of the twin towers, said interested investors have begun touring the property. She said that the steep price of $625 a square foot was not surprising.

The nearby 21-story office building at 1888 Century Park East sold for about $604 a square foot in June.

The iconic 44-story Century Plaza towers, built in 1980, were designed by Japanese-American architect Minoru Yamasaki, who also designed the World Trade Center in New York. Each tower is at least 85 percent leased.

CAA occupies about 180,000 square feet in a 12-story building at 2000 Avenue of the Stars that completes the 3.2 million-square-foot office park. The company, which signed a 15-year lease in 2007, is not expected to be affected by the sale.

Eastdil Secured Inc. has the listing, which was first reported in the Hollywood Reporter last week.

“This is a rare opportunity that’s going to attract international attention,” he said. “It’s not a crazy price for an institutional-quality core asset in a major world city that hasn’t been on the market for many years. That type of asset is in demand around the world.”

Principals at J.P. Morgan and Eastdil did not return calls seeking comment.

The real estate unit of Prudential Financial Inc. has purchased three office buildings in Pasadena, part of a portfolio of seven properties that fetched a total sale price of about $405 million.

Blackstone acquired the properties when it purchased Chicago real estate investment trust Equity Office Properties in 2007. Since then, Blackstone has been reselling many of the 513 buildings that were part of the Equity Office portfolio after putting in work to boost occupancy.

The seven buildings purchased by Prudential have a combined average occupancy of about 93 percent. The four properties not in Pasadena are in the Sorrento Mesa suburb of San Diego.

Peter Rose, a spokesman for Blackstone, did not return requests for comment on the sale.

Bottega Louie, a popular downtown L.A. eatery known for selling a colorful array of French macaroons, has signed a 15-year lease for nearly 20,000 square feet in the former Union Oil headquarters building, where it will expand its restaurant operations and set up corporate offices.

Roughly three-fourths of the space is an unfinished basement, which the restaurant operator has already begun converting to test kitchens, employee training facilities and design studios. The remaining 5,000 square feet is on an upper office level where the company will handle administrative business. Industry sources estimate the lease value at more than $8 million.

The basement space leased by Bottega Louie at the Union Oil building, at 617 W. Seventh St., is three times larger than a Glendale space it had been using for food development, preparation and training. Because it’s across the street from its restaurant at 700 S. Grand Ave., the new space is also much more convenient.

Adam Tischer, vice president of Colliers International in downtown, represented Bottega Louie in the transaction. He said he began working to find space for the restaurant company two years ago, finally brokering a deal for off-market space in the 12-story building owned by San Francisco-based Swig Co.

“Demand for space in downtown is so great that a major tenant was willing to lease basement space that wasn’t even on the market, because demand is outstripping supply,” he said. “New supply had to enter the market to satiate demand.”

John Herman, chief executive at Bottega Louie, said the larger space will better accommodate the growing company. He hopes to finish construction on the space and open it for employee use and invited guests by November.

“We wanted to have the space to build a state-of-the-art tasting kitchen that will service our current restaurant location and other future investments we’ll be making in the Los Angeles market,” he said.