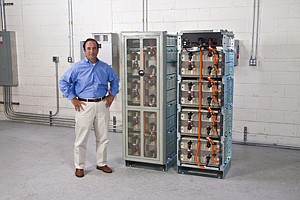 When the state Public Utilities Commission recently ruled that power companies must increase their capacity for storing electricity, it offered a much needed jolt of opportunity for Coda Energy, a Monrovia company that makes batteries that can fulfill that mission.

Coda is a familiar if tarnished name in Los Angeles: Coda Energy emerged from the ashes of the L.A. company that made the poor-selling electric car Coda.

The PUC ruling – the first such mandate in the nation – has set off a rush among dozens of companies trying to bring their energy storage products to market in an industry barely five years old. Big guns such as Samsung Group, Panasonic Corp. and General Electric Co. are poised to fight for market share with other energy companies such as AES Corp. and venture capital-backed startups, mostly in the Bay Area.

One of the few local players is Coda Energy, owned by New York hedge fund giant Fortress Investment Group, which bought the company out of bankruptcy earlier this year. Others include Ice Energy of Glendale, which has a product that hooks into rooftop building air-conditioning systems, and Energy Cache in Pasadena, which is developing a mechanical battery.

Coda Energy has spent the last two years developing a modular tower that combines a lithium-ion battery that accepts direct current from electricity generators and converts it into alternating current power, which is used by businesses and households. Each tower can store 40 kilowatts of electricity, enough to power a midsize commercial building for an hour.

String together hundreds of these battery modules in a series of standard shipping containers and Coda’s technology can store enough electricity to power a military base or absorb all the electricity generated by the largest solar or wind farms.

“The beauty of our system is that it’s scalable, allowing it to be tailored to an individual store looking to shift its energy use or to an entire military base looking to be self-sufficient,” said Ed Solar, Coda’s chief operating officer.

Coda has signed contracts to begin deploying its battery systems as early as the second quarter of next year.

But many other players in the energy storage market are also developing scalable battery storage systems, and some have already deployed theirs. Among the market leaders is AES Energy, a unit of AES Corp. of Arlington, Va., which has five battery storage systems in place across the United States, storing a cumulative 100 megawatts of power, with the largest being 64 megawatts at a West Virginia wind farm.

“We have found that these storage solutions work well and have proven themselves reliable,” said AES President Chris Shelton.

Coda Energy is about the only remnant of Coda Automotive, which launched in Santa Monica in 2009. The idea was to provide a lower-price alternative to other electric cars on the market. In 2011, Coda received $832,000 in incentives from the city of Los Angeles to move its headquarters to a vacant building on Fairfax Avenue just north of the 10 freeway, with the prospect of more incentives later.

Coda said at the time that it planned to add 600 jobs within 10 years. But the company faced numerous delays and when its car finally hit a showroom in Century City last year, critics panned the vehicle’s stodgy style, relatively high price and underwhelming performance. Only a couple hundred vehicles were sold; the company filed for bankruptcy April 30.

The ruling by the California commission applies to the state’s three investor-owned utilities, including Southern California Edison, a unit of Edison International of Rosemead. They must try to buy more than 1,300 megawatts worth of energy storage capacity by 2020 – enough to power nearly 1 million homes – with the aim of getting all that capacity online by 2024.

The fact that large-scale electricity storage systems are being deployed is a complete change. Utilities had constructed dozens of natural gas-fueled “peaker plants” throughout the state to feed energy into the grid at times of exceptionally heavy demand.

But battery technology has improved. Until five years ago, battery storage technology was limited mostly to small consumer electronics devices. But starting in 2009, federal research dollars – part of the stimulus package enacted after the 2008 financial collapse – went to battery companies, mostly to improve the efficiency of electric vehicle batteries. But this boost also helped with the development of much larger battery modules.

Another factor: The push for renewable energy has increased the demand for storage. A 2008 executive order by then-Gov. Arnold Schwarzenegger requires utilities to obtain one-third of their power from renewable sources, chiefly wind and solar, by 2020. But solar and wind are intermittent power sources; energy storage is one way to balance out the power supply, to make it more reliable.

“The supply is getting more unpredictable,” said Janice Lin, executive director of the California Energy Storage Alliance in Berkeley, an industry advocacy group formed in 2009. “So the need is there for more flexible capacity on the grid, capacity that doesn’t require building expensive new peaker plants.”

Of course, building huge battery storage systems is expensive, too. It’s unclear how much all that will ultimately cost and how that will affect customers’ bills and investment in the fledgling industry.

Indeed, Lin said, there has been no established protocol for how to value energy storage or pay those who use massive batteries.

“The key stumbling block was the inability to make money because there were no clear-cut ways to be compensated for storage services,” Lin said.

The new state targets could break this logjam. Because utilities now have to go out and buy storage, there might be enough volume to allow the marketplace to set the price.

Also, utilities will likely move to lock in storage capacity with long-term contracts, which should help to provide some financial stability for the fledgling industry.

Coda Energy uses lithium-ion battery technology, while Primus employs “battery flow” technology, which uses a liquid electrolyte to plate zinc onto electrodes. Reversing this process generates electricity that can go on the grid or power individual facilities. A single battery module can store about 30 kilowatts, enough to power about two dozen homes. Fifteen modules can be placed into a standard-size shipping container, which can then be deployed to project sites. So far, Primus has contracts from four customers, including a municipal utility in the Modesto area; deployment is expected next year.

Ice Energy’s air-conditioner system stores chilled water overnight for use during peak afternoon periods, reducing the need to run an air conditioner’s compressor unit. The company contracts directly with utilities; it has already deployed pilot systems for the Glendale Water & Power municipal utility and for Green Mountain Power in Vermont.

Energy Cache is an early stage company housed at Idealab in Pasadena; Idealab founder and Chief Executive Bill Gross is on the company’s board. Energy Cache’s mechanical battery uses buckets to move gravel up and down a hill; energy is stored when the gravel reaches the top of the hill and can be released at any time by moving gravel back down the hill. The company has built a 50-kilowatt prototype at a facility in Irwindale; however, it is likely a few years away from signing contracts with customers.

A handful of other local companies in the energy or electricity business have recently set up divisions to develop energy storage products. Among them is Santa Fe Springs electrical contractor PDE Inc., which sells battery storage devices to customers that have equipment that can run on direct current power, without the need to convert to the more popular alternating current power.

Also, several national and international companies have set up offices in the Los Angeles area, in part to develop and market energy storage technology for the California market. Among these are the aforementioned Samsung, as well as lead-acid battery maker East Penn Manufacturing Co. of Lyon Station, Pa. and Chinese auto maker BYD, which has a corporate office in Los Angeles and has opened a plant in Lancaster to build electric buses.

The key question for all these companies is how the battery storage devices will work in the field. So far, with the exception of prototype demonstration projects, only AES Energy Storage has deployed large-scale battery systems and only for a handful of clients at select locations.

The players that will survive the coming shakeout will be those that can first prove their technology and then line up substantial long-term contracts.

Coda is hoping to be one of those survivors. The company in late summer inked a contract with Encorp, a Fort Collins, Colo., company that procures energy systems for military bases, industrial campuses, hospitals and other major electricity users. Military bases and hospitals especially need backup power systems when the grid fails.

“We need to provide critical power for customers over a longer period of time and Coda seemed to offer the best value,” said Bo Halamandaris, vice president of operations for Encorp.

“Because our product is modular, like building Lego blocks, we can target several markets simultaneously,” Solar said.