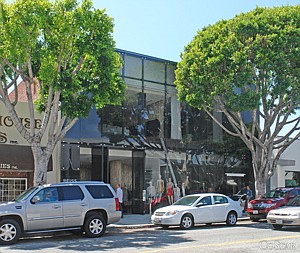 Thor Equities, one of the largest property owners on Fifth Avenue in Manhattan, is in escrow to acquire a 12,400-square-foot retail building on trendy Robertson Boulevard for $27 million, according to sources with knowledge of the transaction. The seller, Chicago real estate company L3 Capital, acquired the property only 15 months ago for $15.8 million.

At about $2,177 a square foot, the sale of 145 N. Robertson Blvd. in West Hollywood would be the third most expensive in Los Angeles County this year, according to CoStar Group Inc. Only two other properties – both in Beverly Hills – sold for more on a per-square-foot basis.

While the price Thor is paying for property might seem high for the fashionable street, it doesn’t compare to what the New York firm paid for the only other property it owns on Robertson. In 2008, Thor acquired storefronts totaling 4,600 square feet at 142-146 S. Robertson for $14.6 million, or $3,144 a square foot.

Jay Luchs, an executive vice president at Newmark Grubb Knight Frank who brokered Chanel’s Rodeo deal earlier this year and has worked with Thor on lease deals in the past, said the sale might indicate changing fortunes for retailers on the street. During the recession, Robertson saw the disappearance of many long-time retailers, including Lisa Kline.

“Thor is an aggressive buyer. They like high-end tenants and they like to control an area,” he said. “Robertson is an international street that could start seeing major change for the better again.”

The seller, Dr. Bruce Gillis of medical research firm Gillis Family Partnership, purchased the 47,000-square-foot building five years ago for $21 million. The building was about 70 percent leased at the time of sale, though Gillis, who occupied offices of about 10,000 square feet in the building, plans to move out in the next few months.

The property is just east of Saint John’s, which earlier this month completed a $1 billion upgrade that took almost two decades to complete after it was damaged in the 1994 Northridge Earthquake. The midsize office building also sits only a half-mile from the UCLA Medical Center on 16th Street, where earlier this year a medical facility of similar size sold for more than twice as much.

Jim Burnap of Beitler Commercial Realty represented the seller in the transaction, according to CoStar Group Inc.

One tool, for example, is a national heat map that provides macroanalysis of an area when zoomed out, and then incrementally more detailed analysis as it zooms in on a specific ZIP code. Another tool gives users access to historical monthly and annual trends as well as price projections. Zonda includes data from more than 270 counties, targeting the 50 largest metropolitan areas in the United States.

Jeff Meyers, president of Meyers Research and creator of Zonda, said he tested the app with 11 companies in the homebuilding industry before launching it.

“Feedback from beta trials has been overwhelmingly positive,” he said in a statement.

Kennedy-Wilson acquired Meyers Research 18 months ago, increasing the smaller firm’s access to national and international data. The iPad app, free from the iTunes Store, provides expanded data services to Meyers Research subscribers who pay between $300 and $10,000 a month for national access, depending on the number of people using the app.