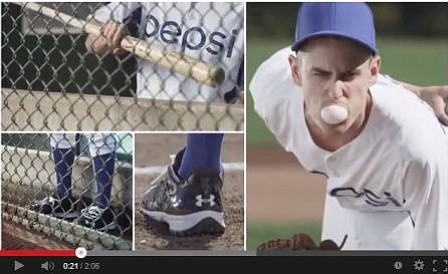 Mike Tompkins wears a Pepsi jersey during his a cappella video of "Take Me Out to the Ballgame" on YouTube.

Maker Studios star Mike Tompkins has another music video out, this one a collaborative, a cappella take on "Take Me Out to the Ballgame."

The video, released on the Maker Music channel, splices together a dozen different singers, beatboxing, and some baseball-themed noises (the crack of a bat, someone sliding into a base, etc.). A day after its release, the video has more than 200,000 views.

Beyond baseball and promoting the 2013 World Series, there's another conspicuous theme linking the singing and Stomp-style rhythms: Pepsi.

Tompkins and a few other artists featured in the clip are wearing jerseys with the Pepsi name and logo splashed across. And in case it wasn't clear that that the soda maker had a hand in this project, the video ends with a fade into a blue screen with the Pepsi logo and the company's motto, "Live For Now."

It isn't the first time Tompkins has lent his talent to marketing efforts – last year he did a similar collaborative cover of Nicki Minaj's "Starships" to promote the film "Pitch Perfect."

These branded efforts from Maker stars highlight the YouTube network's ongoing journey to mine gold in online videos outside of traditional video ads. These kinds of native ads have been cropping up more frequently – non-Maker YouTube star Freddie Wong has done branded pieces too, for companies such as Taco Bell.