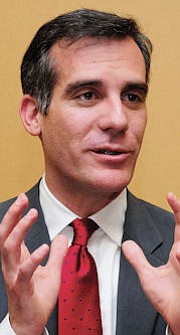 Most indicators point to impressively low turnout in Tuesday's mayoral election. Throughout the campaign, from primary to runoff, the story has been about the pervasive apathy by voters toward any of the candidates who want to helm America’s second-largest city.

Unless, that is, a voter is a member of L.A.'s tech community. Then the ballot has almost certainly been cast – and with vigor – for Eric Garcetti.

Garcetti has been working since the earliest days of his candidacy to become the crown prince of Silicon Beach. The Hollywood-area councilman has appeared on numerous industry panels, promised to increase the size and scope of Antonio Villaraigosa’s Los Angeles Mayor’s Council for Industry and Innovation, and sought donations at any number of places where local techies met en masse.

Garcetti even held a fundraiser last December at the swank Hollywood Hills pad of venture capitalists and sometime Angelenos Tyler and Cameron Winklevoss (who made twin donations of $1,300).

And the fast-growing local scene has been more than giddy to give it back, despite the fact that his council district, which encompasses East Hollywood, Los Feliz and Silver Lake, isn't exactly a tech locale.

They've hosted tweet banks and written online paeans to his knowledge about tech. CrunchGov, the political arm of startup news site TechCrunch, has officially endorsed him. Greg Bettinelli, a partner at Century City venture capital firm GRP Partners, has been particularly vocal, going to bat for Garcetti online and engaging in some tart exchanges with prominent politicos who've suggested both candidates are a tad underwhelming.

The obvious question is: why him and not Wendy Greuel? Their policies when it comes to promoting L.A.'s scene are nearly indistinguishable. Both dislike the tech-unfriendly gross receipt tax. Both think Silicon Beach is just swell and say City Hall should promote it as much as possible.

The clearest answer to why L.A. tech has largely fallen in behind Garcetti may come in a blog post by Mark Suster, also a venture capitalist at GRP Partners. Garcetti, Suster wrote, just gets it. And like Mayor Bloomberg in New York, Los Angeles, too, needs a with-it mayor to be the face of the city's scene:

"Garcetti knows our industry's issues and can promote jobs and fair legislation. While his opponent tours around with Magic Johnson, Garcetti has been at virtually every major tech gathering in our city for the past 18 months as well as dropping knowledge on Reddit."

In short, it's not so much about policy – it's about showing up.