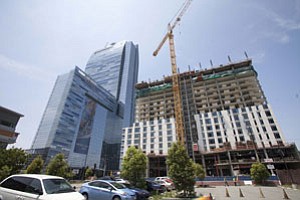 One of the hotels under construction near L.A. Live. Photo by Ringo Chiu.

After years with few if any new hotel developments, at least eight hotels totaling 1,855 rooms are under construction across Los Angeles County.

Those rooms represent a 116 percent increase from the number of rooms under construction last year, when postrecession hotel expansion resumed. They will add about 4 percent to the inventory of nearly 50,000 midrange to upscale hotels rooms in the county.

But it doesn’t stop there. At least 11 more projects totaling 1,544 rooms are planned for the coming two years, according to the Los Angeles Tourism and Convention Board. Among those getting in on the action now is Brad Wagstaff. Attracted by L.A.’s coastal climes, his Park City, Utah, company, Trancas Retail Center Fund LLC, bought a five-acre hotel development site in Redondo Beach in 2009. Then he waited.

Real estate was in the doldrums, lenders weren’t lending and for nearly four years the site lay fallow.

“Financing is becoming available and that’s the primary driver you are seeing,” Wagstaff said. “(During the recession), L.A. saw minimal drops in occupancy levels and rates came down a little bit, but it was still a very resilient market primarily because there’s a lack of supply of hotel rooms relative to the demand.”

Indeed, Los Angeles is among the hottest hotel markets in the country, with average nightly rates of $130 and in some neighborhoods even higher, rivaling those in the Bay Area and New York. Nowhere is this more apparent than in downtown Los Angeles, on the Westside and in the South Bay.

For example, Michael Zislis, who owns Manhattan Beach’s Shade Hotel, is building a second location of his boutique brand in Redondo Beach. Also, a Hyatt Place with 142 rooms in El Segundo and a 288-room Courtyard by Marriott in Marina del Rey are under way, while a Hampton Inn & Suites with 136 rooms is planned for Santa Monica.

Among the downtown projects, the redevelopment of the Wilshire Grand will add 900 hotel rooms. Meanwhile, dual hotel projects on Olympic Boulevard – a 218-room Residence Inn at L.A. Live and a 174-room Courtyard by Marriott at L.A. Live – are slated to open in June of next year.

The Tourism and Convention Board, which is funded by taxes generated from local hotels, said demand for rooms is rising. The county experienced a record number of tourists last year, boasting a 2.5 percent increase to 41.4 million visitors over the previous year’s record high. That helped set a record for hotel occupancy here with 75.4 percent, about three-tenths of a point higher than the previous record, set in 2006.

Visitor numbers are projected to increase again this year and the board hopes it can lure 50 million visitors to Los Angeles by 2020. If those gaudy numbers are reached, the additional visitors are projected to add $14 billion in economic activity to Los Angeles, for a total of $44.5 billion. An additional 68,000 jobs could be added to the L.A. region’s workforce for a total of 392,000 jobs supported by the tourism industry.

More hotel rooms are key to handling – and encouraging – that expected wave of visitors, according to Ernest Wooden Jr., president and chief executive of the board.

“We applaud the hotel development,” he said. “They are being developed because there’s money to be made in developing them. Our numbers tell us we could absorb 5,200 rooms without affecting occupancy.”

“The development pipeline shrunk to nearly nothing from ’09 to ’11,” he said. “But those fundamentals of (revenue per available room) are increasing in markets like West L.A. and in parts of downtown, and are now approaching prerecessionary levels. It’s justifying a pickup in development.”

Indeed, revenue per available room at the end of last year was up 40 percent from the previous year for downtown Los Angeles to $98 a night and up 57 percent for the Westside to $193. By comparison, it was up 53 percent to $138 in the Bay Area, according to industry watcher Smith Travel Research.

In L.A.’s coastal communities, the high barriers to entry and difficulty earning approval for development projects – time lines can run as long as 10 years – means demand will continue to outpace supply, Feist said.

That gives leverage to those in a position to move forward with new projects.

He opened his first Shade Hotel seven years ago in Manhattan Beach. The longtime restaurateur had wanted to create a restaurant at the site but struck a deal with the city to open a hotel instead.

It’s worked out for him. He said occupancy rates the last year were more than 95 percent year-round, while nightly room rates have surpassed $300.

He said the strong numbers he’s seeing at that location inspired him to pursue his second one and he’s already seeking a site for a third. He thinks his boutique brand is giving him an edge over the competition.

The new Shade Hotel will include 54 rooms and a conference center that can hold up to 60 people, an event space for up to 150, a rooftop pool, and a restaurant and lounge.

Meanwhile, Wagstaff is ready to move forward as well.

He acquired his five-acre site at Marine Avenue and the 405 freeway in Redondo Beach in 2009 from a small private developer who had stalled on a proposed hotel project as the economy plummeted.

After gaining entitlements for his project a year later, Wagstaff was forced to wait three more years before he could find financing.

“Traditional financing was not available,” he said. “I had some funny finance discussions with lenders in 2010 where literally I had one lender tell me if I could prove to them that we had enough cash on hand that we didn’t need a loan then they would make a loan. Construction hotel markets across the country were completely decimated.”

To finance the hotel, Wagstaff received a $41 million nonrecourse construction loan and provided equity for the balance of the cost. He was also able to strike a deal with the city of Redondo Beach that sets up a city-controlled $8.5 million fund, created with the proposed hotel’s bed taxes over several years. Wagstaff can borrow from that fund in the future for capital improvements or operating costs.

Both hotels, a Hilton Garden Inn and Residence Inn by Marriott that together will have 319 rooms, are slated to be completed in a year. Wagstaff said he plans to seek approval to build at least two more hotels at the site once these first two are completed.

The area, home to the Los Angeles Convention Center, is considered underserved by hotel rooms. Competitive cities such as Las Vegas and Phoenix have up to five times the number of hotels to serve travelers and convention attendees. But the city of Los Angeles – and obliging developers – are trying to change that with the approval of at least five new hotels in the area.

That’s one reason Marriott is attracted to the downtown market. It has three hotel projects under way or planned there; the two under construction at L.A. Live will add 392 rooms to the market.

Alison Cumberland, vice president of lodging development in the West for Marriott International Inc., said a number of factors make downtown attractive to her company.

“The renaissance of downtown, the fact that your visitors are forecast to increase and that it’s grossly underserved by hotel rooms make it attractive,” she said.