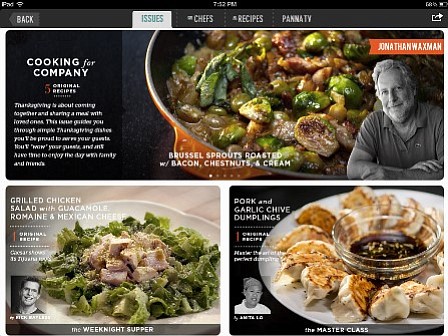 The Panna cooking app for the iPad.

Most startup accelerator programs work with companies that are pre-launch and pre-funding. But with cooking startup Panna, Launchpad LA has taken a different approach.

Panna launched in November as a cooking app for iPads. On Monday it announced a $1.35 million funding round led by Santa Monica’s Anthem Venture Partners with participation from a handful of other venture firms and angel investors. Launchpad LA was also part of the round.

“They have a lot of relationships in the area,” he said of working with Launchpad. “Even though we are not part of a class, we just felt that their relationships were pretty deep and they could be helpful across a lot of different areas.”

The Panna app is a cooking magazine for the iPad or iPhone. It features photo spreads, recipes and videos with famous chefs, such as Nancy Silverton of La Brea Bakery and Mozza fame, cooking in their homes.

With so many free cooking apps available for download, Panna initially received pushback from potential investors over its pay structure, Ellner said.

“The biggest question I got was why anyone would pay for this,” he said. “A lot of people told me that it was crazy to try. But I’ve had a long history and career of watching people pay for content when they want it.”

Ellner is coy about revenue or subscription figures for his five-person company – which has offices in Los Angeles and New York – but said that the app has “hundreds of thousands of downloads” and “thousands of paying customers.”