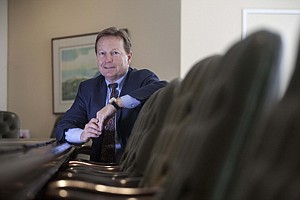 Graves at Lewis Brisbois in downtown. Photo by Ringo Chiu.

Lewis Brisbois Bisgaard & Smith LLP might be the least glamorous big law firm in Los Angeles. In the hallways of its offices, you’re more likely to see haphazardly stacked boxes of litigation files than on-site coffee baristas of the kind hired by a nearby powerhouse firm.

Then there’s the firm’s specialty: the low-profit world of insurance defense. Not exactly Apple vs. Samsung.

But an unlikely thing has happened. While other large firms have shrunk in recent years, Lewis Brisbois has expanded. It is now the biggest law firm in Los Angeles by attorney head count, according to the Business Journal’s annual list of largest firms. (See page A2.)

The firm, which handles a high volume of litigation work at lower rates than many large firms, has grown to the point where it hires more attorneys in Los Angeles County than century-old white-shoe institutions such as O’Melveny & Myers LLP and Gibson Dunn & Crutcher LLP.

What the ascendancy of Lewis Brisbois says about the state of the law business in Los Angeles, said Sandy Lechtick, president of Woodland Hills legal search firm Esquire Inc., is that “billing rates and bang for the buck are increasingly more and more important, and that plays to Lewis Brisbois’ strengths. They’re not trying to have the fanciest offices on Bunker Hill. They watch their costs. The firms that have a reasonable cost structure are attracting a lot of the business that used to go upstream.”

Lewis Brisbois’ path to No. 1 has been one of remarkable growth through the downturn. It has added more attorneys – 61 – in Los Angeles in the last five years, a time when most firms have been shedding them, than any other firm (See sidebar, below). For example, O’Melveny & Myers, second on this year’s list, has shed 110 – 30 percent – of its attorneys in Los Angeles since 2008. That year, O’Melveny reported 370 L.A. lawyers to Lewis Brisbois’ 210.

Timothy Graves, managing partner of Lewis Brisbois’ L.A. office, credited the firm’s rate flexibility – a whopping 20 percent of its revenues come from alternative fee arrangements, which cost-conscious clients tend to favor – as well as its focus on litigation for success in the downturn.

“The economy being tough over the last few years may have affected some of the firms more focused on the corporate transactional area or the real estate area,” he said.

The firm’s success further signals the shift in the L.A. legal market toward middle-market work, said Peter Zeughauser, a legal consultant in Newport Beach. Firms seeking higher-margin work from large corporations have turned their attention away from Los Angeles.

“Right now L.A. is not a hotbed of high-rate work,” said Zeughauser. “All those other firms have put an emphasis on growing in higher-rate markets, particularly New York and D.C.”

The firm was co-founded as Lewis D’Amata Brisbois & Bisgaard in downtown Los Angeles in 1979 by seven lawyers, many of them litigators specializing in medical and legal malpractice who left Overton Lyman & Prince, one of the oldest firms in Los Angeles.

It charged rates lower than large firms, and many attorneys reportedly earned just 50 percent to 80 percent of the income commanded by their counterparts in the city’s premier firms. It also became known in the 1980s for aggressive insurance defense.

The firm grew beyond malpractice into general insurance defense, representing insurance companies in connection with failed savings and loan associations and toxic waste lawsuits. It reportedly grew its attorney count faster than any L.A. firm through the 1980s on a percentage basis. By 1991, it had grown to 199 attorneys, a number that had jumped to 365 by 2002. That year, it opened an office in New York, the first of many outside California. Today, the firm has more than 20 offices in 12 states and close to 870 lawyers firmwide.

“It’s flown under the radar,” said Lechtick, who has recruited attorneys for the firm. “But it’s clearly the 800-pound gorilla in its space.”

As it has grown, Lewis Brisbois has branched outside of its insurance roots into practice areas including some corporate and real estate work. But insurance defense still accounts for more than half of its business, Graves said, with clients including American International Group Inc., Farmers Insurance Group and Travelers Cos.

Graves declined to discuss finances, but Lewis Brisbois is known in the legal community for charging lower rates, and taking in lower profits, than other large firms. American Lawyer magazine estimated the firm’s 2011 profits-per-partner at $620,000, much lower than L.A.’s other major law firms. O’Melveny, Gibson Dunn and Latham & Watkins LLP each reported profits per partner of more than $2 million last year to the Business Journal.

Lewis Brisbois isn’t done growing. Its plans include opening offices in Oregon and Missouri in the next six months. It will also continue expanding and cross-marketing its other practice areas; for example, it wants to handle more employment issues for health care providers.

“We’ll continue to grow into different locales and we’ll we want to expand some of our practice areas,” Graves said. “We’re going to keep doing what we’re doing.”