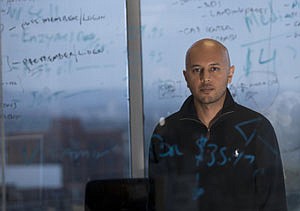 Still, digital ads played a large role in the election, thanks in part to a local tech firm and a political action committee that had no limit on donations.

West Hollywood ad tech firm Engage: BDR donated its services to Lots of People Who Support Eric Garcetti, a pro-Garcetti PAC. The work involved getting targeted online ads to as many of the city’s 1.8 million registered voters as possible in the weeks leading up to last month’s run-off vote.

Ted Dhanik, co-founder and president at Engage, explained that the innovation came in delivering custom ads to specific voters.

“(The PAC) wanted to reach all of those voters with very specific messages,” he said.

It took a good bit of effort to comb through the digital universe and find such a small sampling of people as the L.A. electorate.

The firm had between five and 10 of its roughly 60 employees working on the project at any given time.

The work involved sifting through troves of data from credit card companies to get computer IP addresses and home addresses of people within L.A. city limits.

That data was then sent to the pro-Garcetti PAC, which matched it with voter information, such as party affiliation and ethnic background. The PAC broke voters down into five specific groups based on their profiles. For example: people interested in immigration reform.

The work then shifted back to Engage, which bought ads to show up when those people visited popular websites such as FoxNews.com or About.com, for example. Buying all the ads cost Engage more than $50,000.

The work underscored the support for Garcetti among tech startups in Los Angeles.

Bill Carrick, a consultant for the Garcetti campaign, said he was approached by many tech firms that were offering new ways to target voters.

“I was pitched by more digital firms than I ever have been by a long shot,” he said. “Many of them had interesting proposals, but we would never have been able to afford one-tenth of them.”

Dhanik, an outspoken Garcetti booster, was looking for a way to contribute to the campaign and pitched his company’s services earlier this year. The campaign, however, decided to spend its money elsewhere. What’s more, the $1,300 limit on campaign contributions meant donating the services in-kind was out of the question, too.

But an opportunity emerged in February, when the pro-Garcetti PAC was getting set to launch to counteract the work of a similar independent expenditure group supporting Wendy Greuel. The pro-Garcetti PAC quickly raised about $2.25 million, with donations from the likes of billionaires such as Panda Express owner Andrew Cherng and former Walt Disney Co. executive Michael Eisner.

Dhanik then pitched Engage’s free services to Rick Jacobs, co-founder of the PAC, who accepted. Jacobs said Engage’s work became a key part of the PAC’s digital strategy, as the ads were pumped out at the close of the campaign.

“Targeting voters is a science,” he said. “It’s being refined. There’s a lot of information available – whether someone is likely to turn out or if they’re going to vote for another one of the candidates. I would welcome the opportunity to do more of this.”

Dhanik is hoping the work will indeed bring in new business from both political and social causes as well as from commercial clients that want to target consumers. The firm’s largest line of business is buying ad space from publishers and selling it to advertisers. It also operates its own ad exchange, which it used to purchase the Garcetti ads. The firm had about $50 million in revenue last year.

Many credit the Obama campaigns for paving the way for digital technologies in elections. Besides Jacobs, the other co-founder of the Garcetti PAC was Mary Jane Stevenson, who directed Obama’s re-election campaign in California.

But local elections are different, most notably due to smaller budgets and the need to reach a very specific geographic group of people.

That would seem to open up an opportunity for ad-targeting firms. However, much of the technology is new and its usefulness to campaigns will need to be proved. To that end, Dhanik plans to make a case study of Engage’s work on the Garcetti campaign to show the potential.

Improvements can still be made. For example, he conceded that his firm wasn’t able to reach large numbers of black voters – a group Garcetti lost at the polls.

Meanwhile, some say traditional media still is the best way to communicate to voters.

Jeff Millman, another Garcetti campaign consultant, said the message from Garcetti to voters was broad enough that targeting messages to specific voters might not have even been that important.

“It was a broadly popular message,” he said. “It worked on broadcast TV – the least targeted of mediums.”