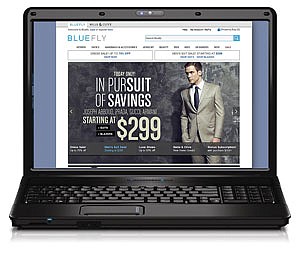 The firm last week said it agreed to buy a unit of Agilysys Inc., an IT company in Alpharetta, Ga., that provides services to retailers. The unit, called Retail Systems Group, will be renamed Kyrus Solutions after the acquisition, which is expected to close in the next few months.

“We think that Kyrus is well-positioned for future growth because the broader market is an attractive opportunity,” Mehrotra said. “Retailers are continuing to invest in technology to enhance the consumer experience.”

Clearlake will pay about $35 million, according to documents filed with the Securities and Exchange Commission.

That acquisition follows a roughly $13 million deal Clearlake closed in late May. It bought all outstanding shares of online fashion retailer Bluefly Inc. of New York. The company had been publicly traded on the Nasdaq.

Bluefly lost $4.4 million in the first quarter on revenue of nearly $20 million.

The private equity firm is widely diversified, with investments in tech, manufacturing and even oil field services companies, but it has invested in a handful of e-commerce companies, including Buy.com. Bluefly executives said new ownership will reinvigorate their company.

“Clearlake brings an outstanding team with e-commerce and financial expertise, and they are dedicated to re-energizing this business and brand at a pivotal time in our sector,” Joseph Park, Bluefly’s chief executive, said in a statement.

Both acquisitions come a few months after Clearlake closed a new $785 million fund, its third.

The settlement calls for First California and an Austin, Texas, company to pay $1.1 million in restitution to customers who used prepaid federal benefits cards issued by the bank.

The FDIC said First California and Achieve Financial Services LLP in Austin advertised free bill pay and other services, but cardholders did not receive those services. Also, it was alleged the companies charged fees that were not clearly disclosed.

Along with restitution, First California will pay a $600,000 penalty to the Treasury Department. In the settlement, First California neither admitted nor denied any wrongdoing. PacWest executives did not return calls for comment.

The settlement was signed May 28, just days before the PacWest acquisition closed, and it’s not clear whether First California or its new owner will pay.

PacWest has at least one other bit of old First California business remaining: lawsuits filed against the bank by several political campaigns.

The campaigns of U.S. Sen. Dianne Feinstein and other California Democrats have alleged First California bankers knew about an embezzlement scheme by now-jailed campaign treasurer Kinde Durkee. Nine such lawsuits are pending against First California.

In 2010, NuVision and Manhattan Beach’s Kinecta Federal Credit Union, the second largest in Los Angeles County, announced a plan to merge, but both credit unions walked away from the deal last year.