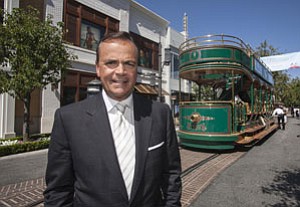 The notion of a trolley linking the shopping and cultural attractions of L.A.’s Miracle Mile district is something that local business leaders increasingly are agreeing on. But there is something they’re disagreeing on: what type of trolley to get.

Rick Caruso, billionaire developer of the popular Grove shopping center, wants San Francisco-style streetcars on fixed rails. He is pushing to extend the trolley now on tracks at the Grove out along Third Street to the Beverly Center and eventually down Fairfax Avenue to the museums on Wilshire Boulevard.

“When you look at the other great cities – San Francisco, Portland, Seattle, just to name a few – they all have rail streetcars,” Caruso recently told the Business Journal. “Los Angeles has so little in this regard.”

But local merchants and business groups say that such a train-type trolley would be too expensive – at least $80 million – and a problem for local traffic. They prefer bus trolleys similar to those in Beverly Hills and Laguna Beach. These would cost about 2 percent of a trolley train and could be running within a year or two instead of 10.

“I love Rick’s optimism, but I don’t see how a fixed-rail trolley is doable,” said Mindy Lake, a local residential duplex owner who sits on the board of the West Third Street Business Association. “A trolley bus, on the other hand, would connect all the shopping and eating attractions, and maximize the opportunity for people to stick around to take advantage of all these shops and restaurants.”

A bus trolley in the neighborhood ran briefly in the late 1980s and both sides agree that now is the time to revive it.

Third Street has been getting trendier since even before the Grove opened a decade ago. And the museums on Wilshire Boulevard have also taken on a higher profile, especially with plans for a $650 million makeover of the Los Angeles County Museum of Art campus and for a $300 million Academy of Motion Picture Arts and Sciences museum at Wilshire and Fairfax.

“With this academy museum, we now have a golden opportunity to connect a true cultural center on Wilshire Boulevard with a true retail center on Third Street,” said Lyn MacEwen Cohen, president of the Miracle Mile Civic Coalition, which includes on its board most of the district’s major landowners and developers.

Caruso said the only missing ingredient from the area transforming into the next downtown Portland, Ore., or San Francisco is a fixed-rail trolley.

“I was in San Francisco just this past week and their trolley is such a compelling and interesting way to get around,” Caruso said. “It makes life more interesting.”

He said he has also drawn inspiration from plans moving forward for a streetcar on rails that would run along the Broadway corridor in downtown Los Angeles.

Caruso unveiled his plan for a trolley train at a Miracle Mile Chamber of Commerce meeting last month. He said a trolley from the Grove to the Beverly Center and on to LACMA is the perfect place for such a system.

“There are so many things to do between dining, shopping and the cultural/art scene,” he said. “It would be great to have a transit system that does a loop: You park people at the Grove, have them eat on Third Street and then go on down to the museums on Wilshire.”

Caruso said he has no problem with the trolley stopping at the Beverly Center, a competing mall.

“Look, if the Beverly Center does better, we all do better, including my properties,” he said.

The trolley train route would be different from the presumed bus route. As currently envisioned, the two-mile loop would run north along Fairfax between Wilshire and Third, where it could connect to the existing trolley at the Grove. Then it would turn west on Third to San Vicente, head south to Wilshire and back to Fairfax.

The cost of that two-mile track could reach $80 million to $90 million, based on projected construction costs for the downtown streetcar project.

Although Caruso said he would be willing to pay for some of this, no one has identified where the rest of the money would come from. Significant government funding is viewed as a long shot. And the chances of forming an assessment district of landowners are viewed as slim, especially since landowners along Third have twice rejected much smaller assessments to form a business improvement district.

The trolley rail line could take a decade to build, factoring in all the necessary approvals and construction time.

There’s also concern from local merchants and residents that a rail line would either take away a lane of traffic or limit the number of parking spaces on Third and Fairfax, both of which already face high levels of congestion.

“We have concerns about anything that would disrupt the flow of traffic,” said Diana Plotkin, president of local homeowners group Beverly Wilshire Homes Association. “There’s so much traffic now that the residents can’t even use the major streets. I can’t even imagine how much worse it would be if you run a rail line right down the middle of Third Street.”

Caruso said he’s convinced that so many people would leave their cars at the Grove or some of the other major parking structures and take the trolley that car traffic would actually decrease.

He said he has discussed the idea of a rail trolley a few times with Los Angeles City Councilman Tom LaBonge, whose district includes the Grove and the museums on Wilshire. Caruso also said he would accept a bus trolley as an interim step.

LaBonge said Caruso’s idea for a rail trolley holds future promise, but he wants more immediate action and is pushing for the bus trolley. He sees demand from the thousands of residents of the massive Park La Brea apartment complex wanting to go to the shops and restaurants on Third and to the museums on Wilshire.

“I would immediately begin a trolley on wheels, like the ones in Laguna Beach or Beverly Hills, and I would start it tomorrow if I could,” the councilman said. “The Grove has completely transformed the neighborhood and Park La Brea is now filled with younger, hipper residents that I could see hopping on this trolley.”

But LaBonge said that if Caruso were willing to put up much of the money for a rail trolley, “I would be ready to block and tackle for it at City Hall.”

Local merchants and business groups want to bring back the short-lived trolley that was replaced by a Dash bus line.

It would cover a seven-mile route on La Brea Avenue, Wilshire, Fairfax, Melrose Avenue and San Vicente. The only addition would be the one-mile stretch of Third between La Cienega and Fairfax.

“Bringing back such a system now would certainly help connect all the attractions in the area,” said Hank Hilty, president of A.F. Gilmore Co., which owns the Farmers Market at Third and Fairfax. “It would help boost the attendance at all the attractions. You can park at one location and circulate through the area.”

Backers see a bus trolley running every 15 minutes along this 30-minute loop, with a total of four buses. Initially, the bus trolley would run from Friday night through Sunday night.

Laguna Beach spends roughly $1 million a year to lease, maintain and operate five of its 12 bus trolleys. In 2010, the city purchased four bus trolleys for a total cost of $963,000. Some of the bus trolleys operate year-round, with all 12 operating during the busy summer months.

Whatever organization runs the bus trolleys, it would have two options: leasing or buying. If it went the lease route, based on Laguna Beach’s numbers, it would cost about $1 million annually. The purchase option would be $1 million upfront and $500,000 annually to operate and maintain.

That money could come from an assessment of property owners along the seven-mile route, assuming the landowners vote to approve it.

Los Angeles Department of Transportation officials have taken a preliminary look at the trolley bus plan.

“We do have some concerns about ridership,” said Phil Aker, a transportation planner at the department. “Of the 25 Dash lines we now have, the Fairfax Dash line has the second lowest ridership.”

Yet despite this concern, Aker said a bus trolley is preferable to a rail trolley.

“With a trolley bus, you can alter the routes,” he said. “And there are minimal startup costs.”