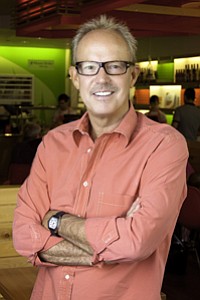 In Southern California, the birthplace of modern commercial burger culture, people aren’t shy about eating the occasional cheeseburger and fries. But more and more, meals don’t include meat, or any animal byproducts, for that matter.

Top of the plate in that effort in Los Angeles is vegan food chain Veggie Grill.

The Santa Monica fast-casual restaurant company, while certainly not the first in the area to cater to health-conscious vegetarians, is the first to act on an expansive national agenda.

Veggie Grill expects to double its total restaurant count from 19 to 40 by the end of 2014, beginning with outlets up and down the West Coast then soon thereafter taking on Texas and New York.

In addition to meatless and dairy-free cheeseburgers, the vegan chain serves plant-based comfort foods including macaroni and cheese; sweet potato fries; and fried “chick’n” sandwiches, made of wheat and soy proteins.

“Ten years ago, a concept like Veggie Grill had very little appeal,” he said. “Today, healthy food is more top of mind. Time has caught up with this type of a concept, and it’s allowing Veggie Grill to expand and be successful.”

Greg Dollarhyde, who joined Veggie Grill as chief executive two years ago, said the chain plans to capitalize on the growing trend toward healthy vegetarian food.

“We really want to change the way people eat, think and talk about vegetarian food,” he said. “And, like any business, we want to capitalize on our growing following while we can.”

Veggie Grill has signed leases to open three restaurants in the next two months. They will be in Westlake Village, San Diego and downtown Seattle. A fourth location – in Carlsbad – is expected to begin construction soon, too.

The company is simultaneously looking for leases to open restaurants in Houston and Austin, Texas, and recently opted to cast it nets as far as New York.

“When you start thinking about being 3,000 miles away from the restaurants you’re opening, it’s kind of a daunting task,” he said. “But at the same time, we think New York is ready for our food. There’s the start of a better-for-you food movement happening in New York now.”

But even as the trend toward healthy eating is on the rise, Tristano said such aggressive expansion might be a challenge for Veggie Grill. For one thing, restaurant real estate is harder to come by these days, particularly in the upscale markets the chain is planning to enter.

“The industry has improved since the recession and we’re seeing more restaurant openings than closures,” he said. “Because of that, top locations are more difficult to find and obtain. Veggie Grill isn’t just another pizza place that can survive almost anywhere.”

The vegan chain, which is entirely company owned, leases space rather than purchasing real estate in the upscale urban markets it prioritizes for growth.

Dollarhyde, who said his personal goal for the company is to double the chain’s restaurant count every 18 months, said he likes to open more than one restaurant in a region at a time.

“You have to be willing to go into markets and build out more than one,” he said. “One restaurant in Seattle, for example, doesn’t create the excitement or awareness that you need in a big city.”

The company, which Dollarhyde said has grown revenue by 65 percent in the last year, is funding its expansion in part through corporate cash flow, but mostly with $20 million the company raised from investors in January. Westside private equity firm Brentwood Associates, which began investing in Veggie Grill in 2011, provided much of that money and is now the company’s largest single shareholder.

Still, Vegetarian Resource Group, a Baltimore non-profit that tracks Americans’ meatless eating habits, estimated that vegetarians made up only 3 percent of the overall U.S. population in 2010.

That, Tristano said, means Veggie Grill will need to convince carnivores to try its food to have widespread success.

“I think most Americans who eat hamburgers prefer beef to black bean or Portobello,” he said. “If the price point is similar and I have the choice of having a burger at Veggie Grill or at Umami Burger, I’m going to go where the taste is better.”

Dollarhyde said that while meat eaters might not be drawn to the idea of eating fake meat, once they do, they usually come back for more. In fact, he said only 30 percent of Veggie Grill customers are vegetarian or vegan.

“Because our food is plant based, there’s no hormones, no cholesterol and very little saturated fat,” he said. “It’s all part of the big movement in the United States of better-for-me food.”