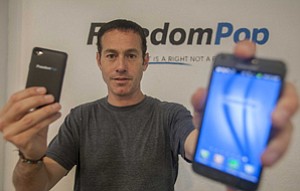 The lure of free Internet has continued to attract investors to FreedomPop.

This month, the West L.A. company that offers low-cost wireless Internet polished off its A fundraising round with an additional $5 million. That gives FreedomPop $16 million in the bank as it sets its sights directly at the mobile Internet industry.

FreedomPop executives said the company is in the market for a B round, which might close early next year.

Investor interest has come quickly, following FreedomPop’s fast rise from promising startup to in-demand Internet service. With money not an issue right now, executives are focused on fixing a pressing matter: a crush of customer demand.

In April, FreedomPop released a wireless hot spot that allows laptop, tablet and smartphone users to connect to the Internet. The $39 device hooks into Sprint Corp.’s 4G WiMax network and offers 500 megabytes of free data, unlimited texting and 200 minutes of voice a month.

Stephan Stokols, chief executive at FreedomPop, said demand for the hot spots was so intense that the company at times had a back order of 10,000 units. He said that’s now down to the low thousands.

FreedomPop also sells a sleeve specifically for iPhones that lets the devices tap into the mobile network. The company’s main source of revenue comes from customers who upgrade to larger monthly data packages.

The goal with the latest infusion of cash is not only to help the company clear out the backlog, but also to prep the inventory for an upcoming FreedomPop phone.

“When we launch (the phones), the money gives us more fuel to be aggressive and reduce wait times,” Stokols said.

FreedomPop’s phones, slated to be released later this summer, will be HTC Corp. devices loaded with a modified Android operating system. Stokols said the company will be selling phones by other makers in the weeks after the launch.

The handsets, selling from $99 up to $199, will also use Sprint’s 4G network, though without the need for an auxiliary device. Data plans on the phones will have the same structure as the hot spots.

Phones are the biggest move yet for the company as it tries to make inroads against cell phone companies’ hold on the mobile Internet market. Earlier this year, FreedomPop teamed up with Marina del Rey app maker TextPlus Inc. to create a free texting and calling service.

TextPlus has been part of the wave of companies that have pioneered free texting and calls through apps. These services have forced cellphone companies to change their billing plans as the high-margin business of charging for texts was replaced by plans that cap customer data. Limited texting, once a staple of the mobile phone plan, is now almost entirely unheard of.

But an inexpensive, data-restricted Internet service such as FreedomPop’s doesn’t seem as likely to upend the Internet service provider industry at large, according to Seattle telecom analyst Donna Jaegers at D.A. Davidson & Co.

With only 500 megabytes of free data each month, FreedomPop doesn’t make a dent in the average browsing and downloading habits of home broadband users. And as smartphones continue to take on heavier and more data-intensive tasks such as streaming video, the monthly allotment might not be sufficient.

Still, lower-end users looking for a deal are a veritable market on their own.

“It makes sense for someone that wants a moderate amount of data and through a service that can connect to a mobile network,” Jaegers said. “They’re looking for a younger person who is very budget constrained and uses most data over Wi-Fi but still wants that connectivity.”

As with the hot spots, the low-cost phone and accompanying data plans have attracted heavy consumer interest. Since FreedomPop announced the phone program in June, executives said more than 100,000 people have expressed interest.

It’s a daunting number given FreedomPop’s troubles to keep up with demand for the hot spots, but Stokols said the company has been purchasing refurbished phones en masse to meet the demand

“Our investors thought we were initially being conservative with our purchase of devices,” Stokols said. “Now we’re not in the situation with the hot spots where we don’t have the inventory.”