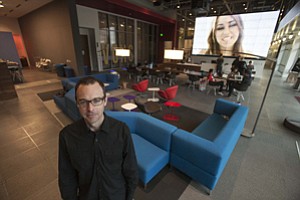 The melding of tech and entertainment might have found its perfect avatar in YouTube Inc.’s new production facility in Playa Vista.

The offices have opened at a time when several out-of-town technology giants are making major forays into entertainment and, by extension, Los Angeles. Suddenly, every major player has set up or built out local outposts as tech has gotten interested in content creation.

The latest: Microsoft Corp. It is nearing a deal to move into a Santa Monica building and set up offices there for its entertainment initiative, Xbox Entertainment Studios. The newest division for the Redmond, Wash., company is set to hire 150 employees to work on video content that will stream through the gaming console.

Netflix Inc., headquartered in Los Gatos but with a satellite office in Beverly Hills, has been ramping up production of original content delivered through its video streaming service. Amazon Studios Inc., an offshoot of Amazon Inc., has small offices in Sherman Oaks where the Seattle online retailer is developing video content to offer through its Amazon Prime platform.

“When we were looking for a city to open the space, we just followed our partners,” said Liam Collins who heads the YouTube facility. “From the early days of YouTube, this has been one of our biggest markets so we felt like we needed a home for acreators in L.A.”

To those who have been working at the intersection of tech and entertainment for years, it’s no surprise that Los Angeles has emerged as the center of the new movement. The entertainment industry continues to draw most of the country’s writers, producers, musicians and designers – the parts that are necessary for content, digital or otherwise.

“For story creation, the belly of the beast is in L.A.,” said Peter Levin, chief executive of Santa Monica new-media empire Nerdist Industries. “And the biggest sign that it’s here to stay is the physical footprint these tech companies are establishing.”

Levin, who’s been involved in L.A. tech for more than a decade, witnessed the merging interests of tech and media a few years ago. But he said it was done wrong then. That period was marked by media conglomerates buying upstart tech firms at high prices then letting them languish. It was the era where News Corp. bought IGN Entertainment, an online network of video game and other men’s lifestyle magazines, in 2005 for $650 million only to sell it off this month for a fraction of that.

“Ten years ago there was buying and putting on the shelf,” Levin said. “Today there’s more understanding on both sides and smart people making bigger decisions.”

Those smart people that the tech companies have hired to run these original content initiatives have tended to be former top executives from the entertainment industry. Microsoft brought Nancy Tellem, formerly the president at CBS Television Studios, to head the Xbox entertainment project. Amazon Studios is headed by Roy Price, once a top programming executive at Disney.

Tellem was not available to comment for this story, but she previously said that she has long been fascinated by the improvements technology can make to the inefficiencies of broadcast television.

“When I worked in traditional TV, we would find ourselves saying things like, ‘Wouldn’t it be cool if we could add an interactive aspect directly into the show and engage directly with the viewers?’ ” Tellem said during a recent media panel hosted by tech blog All Things Digital. “With Xbox, that is possible today.”

Microsoft has already used the console as a hub for streaming video events, such as the presidential debates. And the game console’s motion-detecting Kinect device has been integrated into interactive children’s shows.

A Microsoft spokesman declined to reveal specifics of what kind of content Xbox Entertainment Studio will be producing or what new technology it will involve. Release of the newest version of the Xbox console is expected sometime during the year.

Netflix might provide an indication of what Microsoft’s plans are, and the kind of money it might need to spend in order to produce high-quality content. For its new TV series “House of Cards,” developed by Century City production house Media Rights Capital, Netflix reportedly spent $100 million for two 12-episode seasons. Although that cost is meager compared with the more than $2 billion Netflix paid the studios to license and distribute their TV shows and movies in 2012.

The new methods of transmitting video might not require high-cost production values at all. YouTube content creators have traditionally favored an inexpensive lo-fi aesthetic for their videos. But the company has outfitted its local space with a fully furnished sound stage, green-screen rooms and rows of editing bays to produce videos with serious production value.

Hollywood executives have noticed the success some YouTube channels have had bringing in viewers without enormous production and marketing budgets. YouTube’s Collins said he’s been in contact with Sony Studios in nearby Culver City to perhaps build bridges between the site and studio.

“We do things a lot more inexpensively than the studios do and I think they want to understand better why that is,” he said.

Microsoft isn’t a complete neophyte at the original video content creation, and has worked with West Hollywood’s Machinima Inc. on a number of projects. Notably, the software maker co-produced Web series “Halo 4: Forward Unto Dawn,” which promoted the “Halo” video game franchise and was distributed through Machinima’s popular YouTube channel.

That type of sophisticated promotion is now common in the tech and video game industries and might also be a reason why tech companies are taking a deeper interest in having roots in Hollywood.

Aaron DeBevoise, an executive vice president of programming for Machinima, said the changing nature of online video advertising has led Microsoft and others to rethink how they market their products.

“In trying to engage the audience and make them love these products, companies need to program ads from a content perspective rather than taking a tech approach,” he said.

The tech companies that are now getting into the original content business might create a new climate for smaller business to pop up around them. YouTube has built up a cottage industry in Los Angeles of video consultants, promoters and managers who deal specifically with YouTube stars.

There remains a similar hope that the rising tide of new video streaming platforms can benefit existing production companies, especially now that they don’t have to travel far to meet with new distributors.

“That proximity is important; it’s about who you play basketball or eat breakfast with,” Levin said. “Having the big tech companies nearby gives this era in media a different vibe.”