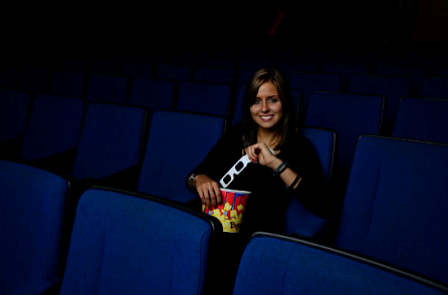 A smartphone app that allows people to watch movies in their native languages is gaining buzz in Hollywood.

West Hollywood’s MyLingo announced Thursday it has raised $750,000 in seed funding from unnamed angel investors. As part of the round, Barclay Knapp, the former chief executive of British cable company NTL; Jeremy Zimmer, chief executive of United Talent Agency; and Dennis Miller, president of operations at TV Guide Networks, will join MyLingo as advisors. The attention from these heavyweights comes even before the app has been released.

MyLingo was co-founded by Olenka Polak while a student at Harvard University. She recently left school during her junior year to move to Los Angeles and work on MyLingo full time.

She and her brother, Adam, developed the idea for MyLingo when hosting Polish cousins visiting the United States. They went to a movie, but her relatives were frustrated that they couldn’t follow the plot because of the language barrier.

MyLingo is hoping to solve that problem by providing movie tracks in other languages.

Spanish speakers looking to watch the next “Hunger Games” film, for example, could use the app to rent the Spanish audio track for the movie for a small fee. When they arrive at the movie theater, they turn on the app and it synchronizes its audio with the English audio playing in the theater. They then plug in their headphones and can watch the movie in their native language.

MyLingo relies on a technology called acoustic fingerprinting that uses a phone’s built-in microphone to sync up the foreign language audio track so that it plays at the same pace as the movie’s English audio.

Polak said she plans to launch MyLingo next year with an undisclosed movie studio partner. MyLingo will start with one movie and only a handful of languages, but will look to build out its database of supported movies and languages as it gains traction with audiences.

She added that she needs to gain the trust of the studios to receive access to audio tracks for movies not yet released in theaters.

“What we’re asking the studios to do is host their pre-released content on our app,” she said. “That is really their crown jewel, as these audio tracks haven’t even been released theatrically.”

MyLingo has anti-piracy features built in to protect the audio tracks from leaking, Polak said. For example, a person rents the track only for the duration of the movie. Once the film is over, the track is deleted from the phone.

Polak plans to use her recent funding to expand her five-person team once she’s settled in Los Angeles. Though she’s still trying to convince her parents that quitting Harvard and moving across the country was the right decision.

“Growing up first-generation American was interesting because my parents really stressed education, so it’s really hard for them to see me leave a school like Harvard,” she said. “Being at school through the early stages of the company was great. But throughout the summer, I wasn’t physically present in the classroom all that much. It was my time to pivot as an individual and be a full-time entrepreneur.”