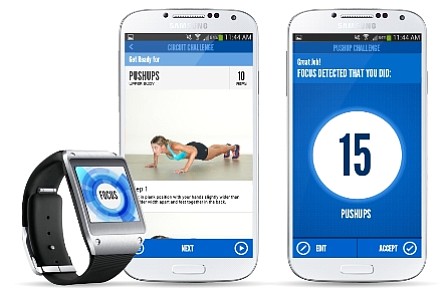 Are Smartwatches the next frontier for exercise devices?

The app helps people monitor their exercise routines and can be placed within the “quantified-self” movement sweeping through the tech world of late.

But unlike run tracking devices such as Fitbit or Fuelband, which are essentially pedometers that add up a person’s steps, Trainr is designed to take on the more complex movements in exercise. Using the Smartwatches’ built-in gyroscope, it logs movements made in exercises such as pushups, squats, lunges and jumping jacks.

The free app is in beta and has a few rudimentary workout regimens built-in. Trainr begins with a diagnostic test that runs people through a few exercises to the point of fatigue. Those results are then used to recommend some pre-set circuits – the more fit a user is, the more times the app pushes him or her through the circuit.

Focus co-founder Cavan Canavan admits the app is still in its early days, but plans to expand the system to track weighted exercises such as bench presses or bicep curls. Future releases of the app will also measure a person’s progress and start tailoring the routines and may include premium workouts for subscribers.

It’s all part of the eventual goal of turning Focus’s app into a digital personal trainer, and one that really knows your personal fitness level.

“People walking into the gym for the first time often don’t know how to work-out,” Canavan said. “We want to bring the expertise of a personal trainer and hone it in an adjustable way.”

Not that the company sees itself as a competition to the personal training industry. In fact, Canavan, who previously worked for athletic shoemaker New Balance, brought the business from Michigan to downtown Los Angeles precisely to tap into the local community of celebrity trainers.

The company is part of the latest class of startups at LaunchPad, and has received seed investments from the tech accelerator as well as Kima Ventures.

The success of Focus Trainr, as it’s now devised, seems to rest entirely on the proliferation of smartwatches. It’s a very young category that only came into existence in a meaningful way this year with the release of Samsung’s watch, as well as one from Sony and the crowdfunded project Pebble.

But Canavan is sanguine about the device’s future, pointing to a study by research firm Canalys that projected 5 million smartwatches will be sold in 2014. And there’s the rumored Apple smartwatch, which category advocates said could legitimize the sector singlehandedly. Still, it needs to exist first.

He’s also banking on a critical mass effect for the app and its technology. The more people that use it, the more data it gathers and the more precise the technology can become. That, said Canavan, is what would lead to his even more ambitious goals, such as having the app monitor your form during an exercise. In effect, the exact thing people pay for in a personal trainer.

“We’re on a cusp of understanding what all these sensors are reading,” Canavan said. “Our goal is to get the information out of lab and into hands of general developers and consumers.”