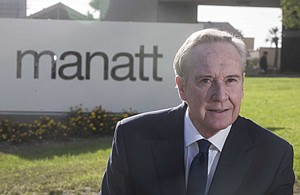 Partner George Kieffer outside the West L.A. office of Manatt Phelps & Phillips, where he heads the government and regulatory affairs practice. Photo by Ringo Chiu.

George Kieffer chairs the government and regulatory affairs practice at prominent Westside law firm Manatt Phelps & Phillips, where he’s worked for 40 years. But the 66-year-old attorney is best known for his civic work outside the courtroom. He led one of the commissions that reformed the city’s charter and served as chairman of the Los Angeles Area Chamber of Commerce. He now leads the Los Angeles Civic Alliance, a group of two dozen business and non-profit leaders that has stepped into some high-profile situations, including the recent effort to retain John Deasy as Los Angeles Unified School District superintendent. In addition, he’s now in the midst of his second stint on the UC Board of Regents. Kieffer has kept up his other great passion: music. He’s written and performed dozens of songs and is embarking on an ambitious album of orchestral music. Kieffer met with the Business Journal last month in his West L.A. office to talk about how Elton John and Carole King spurred him to take a leave of absence, learning how to travel without too much planning and how he served as an adviser to Maria Shriver.

Question: What made you decide to go into law?

Answer: My interest in the law and politics dates back to my days as an undergraduate at UC Santa Barbara. I was living in the first off-campus dormitory and the building was unfinished – things like the stairwells being incomplete. I joined a group of students who sued the owner, Isla Vista Realty; we sought and won substantial rent rebates. That was my first exposure to the law. As for the

politics, it was the late 1960s and there was a lot of unrest on campus. I became a student body officer. That sparked my interest in politics.

Yes, and starting with piano lessons as a child. I found that I really couldn’t read music very well; instead, I played by ear and started tinkering with themes that I heard around me. Soon, I was composing songs, though I couldn’t write them down – I just played them from memory. By the time I was in college, I was composing songs regularly on the piano.

Why did you choose law over music?

When I graduated, my plan was to take a year off before applying to law school. Plan A was to get a job in Washington, D.C., as a legislative assistant. Plan B was to travel to Europe and play in piano bars. I was about ready to go try Plan B when I knocked on the door of Rep. Michael Harrington, a freshman Democrat from Boston. I was really determined to get a job, so I and another friend took it upon ourselves to organize all his mail. I then talked my way in as his first hire, running the mimeograph machine. Eventually, I became a speechwriter.

Then you went to Manatt, but worked there for only three years before asking Charles Manatt for a leave of absence.

Chuck initially thought I was going to run for office. But I told him I wanted to take a year off and study musical theater. He blessed that and said that if and when I came back, there would be a job for me. So that’s what I did. I not only studied musical theater, but I continued my songwriting and actually had some songs published.

What prompted you to do this?

When I was in law school, two great musical talents broke onto the music scene: Carole King and Elton John. What really appealed to me was that they played and sang on the piano as op-posed to guitar. That opened up a whole new world for me in terms of my playing the piano and singing. I started writing songs. Often it was just sitting at the piano and making up the tunes, sometimes putting words to those tunes.

So why did you decide to return to the law firm?

Sounds like an ideal position: You could use all your contacts from your music law practice to further your own musical career.

Not really. Being a music lawyer and a songwriter turned out not to be an easy fit. I learned you really couldn’t combine the two. I did learn a lot about the music business, but I learned to keep my own music very separate from this music practice.

At this same time, you became more politically active.

Yes. I had remained involved in the UC Santa Barbara alumni association and I became president of the association. That automatically entitled me to a seat on the UC Board of Regents as an alumni regent. That was my first stint in public service.

That must have been quite a turnaround for you, considering your days as a student activist.

Well, when I was a student, we thought the regents were all conservative old white men and we viewed them with suspicion – “never trust anyone over 30” and all that.

And now, in your second go-around on the board, you could be considered one of those “old white men.”

Funny you should say that. I recently had the opportunity to meet with the student council at UCSB and I said to them, “I’m just you … older.” And I find that to be true. Now, though, I find the UC system to be extremely exciting.

How did you meet your wife?

We met in the early 1980s when mutual friends brought us together on a river rafting trip. Judith had been working in Alaska and finishing law school. So I courted her in Alaska, flying back and forth a few times. She also came down here a few times. We moved in together and she got a job with the 1984 Olympics. We got married in 1983.

My wife loves to travel, but I’m a poor traveler. Actually, my favorite destination is home. But we had a phenomenal biking trip to Ireland several years ago with our family and other families with kids the same age. More recently, my wife and I went to Paris for the first time together earlier this year; we had each been there before, but separately. This time, we combined that with a trip to Normandy and a visit to our son who was then studying abroad in Scotland.

You said you’re a poor traveler. What do you mean?

It’s sort of a running joke in our family that, “Dad is just not a very good traveler.” You see, I want to know everything that’s going to happen, to plan it all out. My wife just says, “Let’s just go and see what happens.” But I’ve learned over time to let go a little bit and not micromanage the trip.

I generally get up around 6 a.m., pore over emails, head to the gym and arrive at the office around 9:30. Lots of phone calls an

meetings in the mornings and after lunch – generally at my desk – I often prepare for negotiations, conference calls and the like. Each day, I try to carve out an hour in the late afternoon for my civic work, whether it’s the Civic Alliance, the Board of Regents or other projects I happen to be working on. Each Wednesday afternoon, I’m on a conference call with the other regents who are on the compensation committee.

When do you leave the office?

I head home around 6 – unless I have an evening meeting. After dinner, I head to

on composing orchestral music. Then I watch “The Daily Show” or “Colbert Report” and head to bed. On weekends, I love to spend Saturday afternoons working on my music and then the evenings with friends. So as you can see, I try to keep a balance between work and other activities; I’m grateful to Manatt Phelps for allowing me that freedom.

How do you manage it all?

Doing all this is what keeps me sane. The music just happens. The rest of it to me is a balanced life. And these activities generally take somewhat less time than people might think.

now. Probably the biggest thing left is that I want to write and produce an orchestral album. That’s something I’m starting to work on now.

Did you ever consider running for office?

At first, when I was in college, I did think I might run for office. That was what I felt my activism was leading up to. Over time, I found that I was better suited to being an adviser or an appointed person; other people were far more talented for elected office.

What do you view as your major accomplishments as chairman of the Los Angeles Area Chamber of Commerce?

I strengthened the board, bringing in other business organizations like the Valley Industry and Commerce Association as ex-officio members. I think I also helped move the board in a more liberal political direction to give it more credibility on key issues in a region that was moving in that direction.

Tell me about your role in the Los Angeles Civic Alliance.

I thought it would be useful to pull together the heads of a couple dozen non-profits and business groups in a completely informal setting – with no votes – where we could exchange ideas. On the occasions where there was broad consensus, this alliance could step in and make its voice heard, like we did a couple of months ago in attempting to have John Deasy remain as LAUSD superintendent.

Weren’t you Maria Shriver’s personal attorney, too, when she became the state’s first lady?

First, personal attorney is a bit of a misnomer. A better description would be strategic legal adviser. I was her legal counsel, but not on specific matters. I was more of a sounding board to give general advice on issues involving law and politics. As to how it came about, someone on the East Coast referred her to me. Her attorneys had all tended to be from her father’s law firm and she decided she needed someone out here familiar with the local political landscape.

During Arnold Schwarzenegger’s re-election campaign, the press glommed on to the fact that I was her personal legal adviser while at the same time the Manatt firm was representing the proponent of a liquefied natural gas terminal in Malibu that would need approval from the Schwarzenegger administration. There was complete separation between my service for Maria Shriver and this other issue, but things really got blown way out of proportion. So we mutually decided it was best for public appearance that we end our formal relationship. By that time, she had her own agents that were representing her interests on a broad array of fronts, so she didn’t need me as much for counsel.

My father often told me, “Put away 10 percent of your income in savings each year.” Sound advice, though I wasn’t always able to follow it.

Personal: Lives in Brentwood with wife, Judith, executive director of the Los Angeles Parks Foundation. They have two children, Geordie, 23, and Ian, 21.