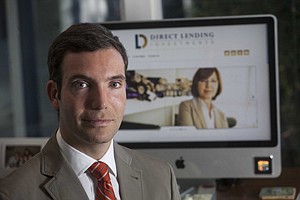 As hedge funds go, Direct Lending Investments is as straightforward as it gets: It doesn’t go long or short on stocks, it doesn’t buy distressed debt and it doesn’t hedge currencies.

It invests only in small high-interest loans to mom-and-pop businesses across the country.

With that strategy, the fund, which just turned a year old, has posted returns of about 12 percent annually after fees, according to its November report to investors. That’s twice the returns posted so far this year by the average hedge fund, according to Goldman Sachs.

Brendan Ross, Direct Lending’s founder and president, said there’s no trick to what he’s doing. Small businesses that need money in a hurry often can’t get it from banks quickly enough, so they’re willing to pay high interest rates – anywhere from 20 percent to 40 percent. At those rates, as many as one borrower in five could default and Ross’ investors would still come out ahead.

“Sometimes we become confused about how simple it can be to make money,” said Ross, a fast-talking 40-year-old who runs the firm out of his La Cañada Flintridge home. “Loaning money to businesses and getting paid back in a short time, that’s the simplest way to make money.”

Of course, that leaves out lots of the complexities that are part of Ross’ business – how loans are underwritten, for instance. But those complexities aren’t really his concern. Direct Lending buys loans originated and underwritten by other companies – Atlanta’s IOU Central and New York’s QuarterSpot. Those companies have developed high-tech ways to judge the creditworthiness of borrowers; Ross is just the money man, sending a monthly check to buy an armload of loans.

So far, investors seem to like his strategy – or at least the fund’s performance. Since creating Direct Lending a year ago, Ross has raised $14 million, mostly from high-net-worth individuals. Investors on a waiting list have pledged an additional $5 million.

By lending to small businesses, Ross’ fund is an example of how peer-to-peer lending is gaining traction – and acceptance among the investing public.

As he gathers more investments, Ross is looking for more underwriters to bankroll. He sees the market for small-business lending continuing to grow, despite skeptics’ belief that the kind of high-interest, relatively high-risk lending he’s supporting is not sustainable.

Bankers and small-business consultants said that they doubt businesses can really afford the kind of loans Ross buys. Edward Von Leffern, a financial adviser at the state Small Business Development Center in Long Beach, said a loan with an interest rate of 20 percent or 30 percent would hurt most businesses more than help.

“Nobody has the cash flow to afford 20 percent interest,” Von Leffern said. “A loan like that is just postponing the funeral.”

But so far, Ross has had no trouble investing clients’ cash, and IOU Central and QuarterSpot are writing and selling more and more loans each month, indicating there’s plenty of demand for this kind of financing.

“Banks have been leaving the small-business loan market for 10 years and they continue to do so,” Ross said. “The size of the hole is growing, not shrinking.”

He left that business in 2008 and set up an investment advisory firm, Ross Asset Advisors. He was investing clients’ money in exchange-traded funds and mutual funds until he heard about the then-nascent concept of peer-to-peer lending.

Ross invested $300,000 of his own money in Lending Club in 2011, liked the returns he was getting and started putting clients’ money in similar investments.

Most loans from Lending Club and competitor Prosper Loans Marketplace Inc., also in San Francisco, are used by individual borrowers to consolidate credit card debt. But Ross thought he could get better returns by investing in loans to small businesses.

“The options for consumers to borrow include Lending Club, Prosper and a whole bunch of credit card companies,” Ross said. “For small businesses, the options are fewer.”

Bank lending for small businesses has been declining for years, according to the Federal Reserve, and many small-business owners who used to use home equity loans to get cash for their businesses haven’t had that option since the financial crisis.

Financial consultant Von Leffern said many small businesses can still get regular loans if they go to the right bank. But many business owners try one or two big banks, get rejected and, in frustration, turn to factoring companies or other high-interest finance avenues.

But now they’re increasingly turning to online lenders like QuarterSpot and IOU. Last year, IOU originated $11.5 million in loans, and is now originating that much or more each quarter.

When Ross last year contacted IOU, part of publicly traded Montreal firm IOU Financial Inc., the company was making loans with its own money. Ross offered to buy loans and pay IOU a servicing fee, a move that would give him exposure to IOU’s loans and give IOU more revenue without having to raise capital. IOU sells to one other fund, but Ross is the biggest buyer.

It would have been risky for Ross’ advisory business clients to buy loans from IOU because any given investor might end up with a bad loan and lose a big part of their investment. But by creating a fund, Ross could buy dozens or hundreds of loans at a time, spreading out the risk of default to all.

So Ross closed down his investment advisory business and created Direct Lending, a fund built to buy loans from IOU and other underwriters.

He started buying loans from QuarterSpot in August, and said he should be working with two more underwriters by March.

The interest rate on the Thai restaurant’s loan is 15 percent, but there’s also a 10 percent upfront fee. In all, the restaurant will pay about $2,700 in interest and fees for the loan over the course of the year.

That’s a lot of expense just to borrow $15,000. A Small Business Administration-backed loan of that size would carry a maximum interest rate of 6 percent and would cost the restaurant about $500 in interest for the year.

But Phil Marleau, chief executive of IOU Financial, said many of his borrowers don’t have that option. Getting an SBA loan or other loans from a bank could take weeks, while a borrower can apply for an IOU loan and have money in their account in two or three days. That speed could be key for a business to quickly replace a piece of equipment it needs to stay in business.

“One of our clients has a pizza place and his pizza oven broke down,” Marleau said. “He doesn’t have time to apply for a credit card or a bank loan. The speed with which we can react to that is vital.”

IOU and QuarterSpot judge business borrowers on their credit history; their owners’ credit scores; and on bank information, including average daily balance and monthly income.

Rather than pay monthly, as with a typical loan, borrowers make small payments on these loans every business day. The Thai restaurant, for instance, pays $71.37 daily, with payments covering interest and some principal.

Those daily payments, withdrawn automatically from the bank account of a business, make it more likely that a business will keep paying, Marleau said, because a business owner would have to make an effort to stop a payment from happening.

Ross said about 6 percent of loans across his portfolio default, though in most cases, borrowers will eventually have to pay. Although the loans are made to a business, they’re personally guaranteed by the business owner.

Even so, Ross said he assumes loans are a complete loss once they’re a month or two past due.

“One thing about this asset class: There’s no games you need to play to deliver good returns,” he said. “You hold good loans, you write down bad ones. You could have run this hedge fund in Italy in 1550.”