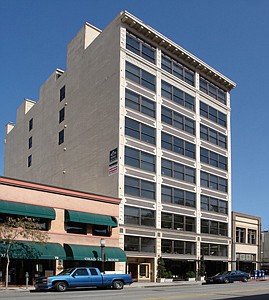 Developers and investors are taking notice as the Arts District in downtown Los Angeles continues to draw the attention of creative people and businesses.

The buildings, used for live-work lofts and for commercial office and manufacturing space, total about 68,000 square feet.

Scott A. Ginsburg, managing partner at Boulevard, said the company plans to cash in on the evolving neighborhood by renovating the property and converting commercial manufacturing space into creative office and retail.

“I’m excited about the urban renewal and redevelopment happening in the Arts District,” he said. “I think the neighborhood is going through an evolution, and we hope to meet and be a part of that evolution.”

Before renovations can begin, the seller, Modernica Inc., needs to move out. The modern furniture manufacturer, owned by brothers Frank and Jay Novak, is said to be actively looking for new digs.

The deal was helped along by Andrew Kirsh, a partner at Century City real estate law firm Sklar Kirsh, who introduced Boulevard to the family office.

“They’re selling assets that are in an old fund, and this is one of them,” he said.

Angelo and Cambra acquired the properties in 2007 as part of a portfolio that also included an office building across the street for $16.3 million, or $234 a square foot.

Safai said the property, which was about 57 percent leased at the time of the sale, has a lot of upside potential for Rising Realty.

“It’s a great asset in a good location in the heart of Old Pasadena,” he said. “I’m sure they’re planning on putting some capital into it, leasing it up, and then holding it as a nice stable asset.”

The nightlife scene in Beverly Hills is about to get a little jazzier.

The Beverly Hills location will be called Spaghettini and the Dave Koz Lounge.

The partners gutted the ground floor of the 87-year-old building last month. When a nearly two-month long Beverly Hills construction moratorium ends Jan. 6, they will begin installing a commercial kitchen and all the acoustic trappings necessary to host late-night jazz concerts. The venue is expected to open in the summer.

The lease with Koss Real Estate for the 5,600-square-foot restaurant was signed months ago, but was held up this fall by city parking requirements, which were eventually resolved.

Jay Gilberg, vice president of Koss Real Estate, was pleased the city was willing to work with Spaghettini to bring the business to the area.

The restaurant, he said, “really shows the continuing evolution of Canon Drive, solidifying it as a restaurant and now nighttime entertainment zone in Beverly Hills.”