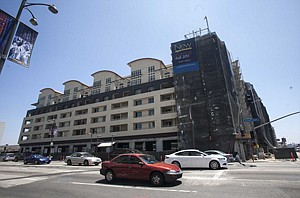 Local construction spending has roared back from the recession, thanks in part to massive public works projects and an increase in mixed-use developments.

Projects such as the revitalization of the Tom Bradley International Terminal at the Los Angeles International Airport have helped push the billings of local general contractors up, in some cases, by hundreds of millions of dollars more than in previous years. Nine of the top 10 companies on the Business Journal’s annual list of largest general contractors reported increases in local billings from 2011 to 2012.

Walsh Group of Chicago, the top company on this year’s list, reported $563 million in local billings in 2012, up more than $200 million from a year earlier. Most of those come from work on the $1.9 billion Bradley terminal project. At LAX, more than $4.1 billion in construction projects are ongoing or planned.

“The things that we’re seeing in the county are the megaprojects,” said John A. Maranowicz, program manager at Walsh’s L.A. office. “At the airport there’s a lot of work coming out. Some of it’s private, but Los Angeles World Airports is still producing quite a bit.”

For Bernards in San Fernando, a boom in multifamily housing has contributed to a $13 million year-over-year increase in local billings. Steve Pellegren, vice president, said the company has 2,600 units of mixed-use projects under construction in Los Angeles. They include 480 units at a six-story retail and residential complex called Wilshire La Brea and 438 units in downtown L.A.’s Arts District as part of the One Santa Fe project. One Santa Fe finally began construction last year after first being proposed eight years ago. It had been put on hold through the recession.

“I think the rents from what I am hearing through our developer friends are higher than expected and there’s still a good value to be received in construction,” Pellegren said. The boost in construction of multifamily housing began about 18 months ago and he expects it to continue for the next couple of years, but maybe not as intensely.

“Whether it continues at this pace is anybody’s guess,” he said.

L.A. developer Jerry Snyder of J.H. Snyder Co. on the Miracle Mile said mixed-use development has boomed as more projects are needed near public transit and construction financing has loosened.

“Money’s available, which it wasn’t three, four or five years ago,” he said. “There’s demand and now there’s money to build it with.”

Last year, work on major public transit projects started, including the extension of Metro’s Expo Line from Culver City to Santa Monica and an alignment of the Gold Line Foothill extension.

Plus, the Los Angeles Unified School District has opened 131 schools between 2010 and 2013.

Since 1997, LAUSD secured $19.5 billion from bond measures passed by voters to build and renovate schools. Although much of the $12.1 billion to build new schools has been spent, there is still $7.4 billion in bond money for renovations.

Kevin Dow, vice president of Turner Construction’s L.A. office, said that in 2009, 2010 and 2011, the company had as many as eight active jobs with LAUSD. New York-based Turner saw local billings increase from $198 million in 2011 to $232 million last year. It continues to do work for LAUSD, such as construction of the Garfield Senior High School auditorium.

“Even though LAUSD has slowed down a little bit, they have great plans in the next couple years for modernization programs,” he said.

Still, not all sectors have gained traction.

However, Turner started redevelopment of the Wilshire Grand, planned as a 73-story office, retail and hotel complex, last year.

Contractors and others in the construction industry have been on a hiring spree. A July report from the state’s Employment Development Department said that for the 12-month period ended in June, there were 9,200 construction jobs created in Los Angeles County. From May to June 2013, construction posted the second highest job gains in the county; first was the leisure and hospitality segment.

“We’re hiring across the board from project engineers to estimating and superintendents” said Jim Madrid, vice president of business development at St. Louis-based McCarthy Building Co.’s Newport Beach office. “Both entities, private and public, are gearing up within the next two to three years for some substantial projects. Companies like us are going to see an increase in opportunities.”