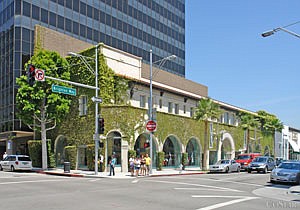 The Beverly Hills home of Emporio Armani Boutique has been sold for an estimated $40 million.

Financial details were not disclosed, but industry sources said the deal was worth $40 million.

GLL purchased the property in 2010 for $25.4 million, and began to market it when it felt the improving economy and demand for high-end retail properties would help it earn the return it sought, according to Patrick Inglis, vice president at Jones Lang LaSalle Inc., who represented the seller in the deal.

The sale price of about $2,197 a square foot is among the highest prices paid for retail in the city in the last five years.

The building, between Rodeo and Camden drives, boasts one of the largest storefronts in Beverly Hills, spanning more than a half-block.

Armani, which occupies the entire building, plans to downsize when its lease expires early next year.

Inglis said the new owners plan to upgrade the 83-year-old building and convert the property into a space for multiple tenants after Armani’s lease expires. It plans to target other high-end apparel companies for the additional space.

He added that the new owners hold high-end retail property nationwide and felt this building would fit well into its portfolio.

“Beverly Hills is a market where product doesn’t trade very often,” he said. “Something adjacent to Rodeo does attract a lot of interest.”

The gentrifying fashion and arts districts downtown gave the property an attractive upside to the new owner, which expects values in the neighborhood to continue to rise.

“This building presented a rare opportunity to acquire an asset in an area undergoing major revitalization along with tremendous upside in rental rates,” Fulkerson said.

The new owner plans to upgrade the building, increase rents and possibly add space for outdoor advertisements on the side of the property.

The seller decided to put the building on the market in order to use the proceeds from the sale for its new project: converting a building at 1315 S. Flower St. into an outlet of the West Hollywood upscale boutique hotel chain Palihouse with a ground-floor bar. It’s not clear whether the owner is part of Paligroup Management LLC, which owns the Palihouse chain, or if it is a third-party owner that would bring Palihouse in as hotel operator.

Americana developer Caruso Affiliated announced a $60 million expansion plan last week on the cusp of the fifth anniversary of the at Brand Boulevard complex.

The new tenants will join a Nordstrom department store, which is moving from the Glendale Galleria in September.

Bloomingdale’s and DinTaiFung will open in the fall with Bourbon Steak following early next year.