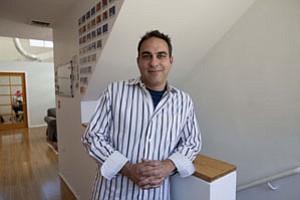 Adam Lilling doesn’t keep track, but if he ventured to guess, he’d put it at 10. That’s the number of inquiries he gets each day from local tech entrepreneurs looking to his firm, Plus Capital, to find investors.

Plus Capital is barely two months old and has made only three investments to date, yet the flurry of companies knocking at the fund’s door with a pitch and a PowerPoint presentation belies its youth.

Indeed, as L.A.’s so-called Silicon Beach continues to produce startups, the venture capital community, once a vestige of the tech bubble, has found new popularity. In 2012, $1.3 billion was invested in local businesses, an 18 percent jump from the previous year according to data from PriceWaterhouseCoopers and the National Venture Capital Association.

In recent years, financiers to L.A.’s tech community have sprung up, beefed up or moved in. It’s brought people like Lilling, formerly an entrepreneur and now a mentor at the Santa Monica tech accelerator LaunchPad LA, to the other side of the table. Some are choosing to reinvest their own money, such as David Waxman and Gil Elbaz of Santa Monica’s new TenOneTen Ventures. Waxman founded a pair of startups, while Elbaz’s first company, Applied Semantics, was sold to Google in 2003 for $103 million.

That’s becoming a common story in Los Angeles and a vital part of the market, said Mark Suster of Century City’s GRP Partners.

“There’s a lot of second- and third-generation entrepreneurs; all the people who made money 10 or 20 years ago are putting in recycled capital,” said Suster, who’s a two-time entrepreneur as well and boarded the venture capital bandwagon in 2007. “When the hat gets passed around I say, ‘Yeah, I’d like to see another great L.A. company.’ ”

This new group of tech bankrollers has its own community that’s distinct and far more casual than the more buttoned-down professionals that might meet for a $150 lunch at Craft in Century City or some similar spot in Beverly Hills or downtown Los Angeles. Lilling’s favorite meeting spot is Le Pain Quotidien, an organic bakery known for communal tables made of reclaimed wood. It’s not far from LaunchPad, where his fund has its office.

In fact, at midday the coffee shops and lunch spots of Silicon Beach can be full of tech investors. Some meet at the Refinery on Santa Monica Boulevard, others at Peet’s Coffee on Main Street.

Despite the low-stress appearance, tech is a notoriously competitive industry, with companies going under quickly and investors angling for a crack at the most promising startups. But for the new financiers of the L.A tech boom, there remains a youthful spirit of the collective.

“The level of collaboration you’ll see is amazing,” Lilling said. “People who are raising their own funds helped me to find (contributors) for my fund. That’s almost unheard of in investing.”

As for the investments themselves, the tech financiers are looking for a return that’s about 10 times the initial investment. It’s a level that gives a satisfying return to people bankrolling a fund as well as covering the losses from the bets that went wrong.

The funding lifecycle of a startup generally begins with a small round from friends and family, maybe for $25,000. That initial spark gives a newborn company enough life to raise a seed round, led by angel investors and smaller venture capital funds. The size of seed funds vary by a company’s needs, but average in the low seven figures.

Once a business has hit its benchmarks and is gaining a quantifiable market value, larger firms join the subsequent A and B rounds. Investments can easily soar past $10 million at this point, and a company’s equity begins to be split up among the venture capital firms. Beyond that, investment rounds get larger and the equity pie continues to be sliced, until, hopefully, a startup “exits” – either it gets acquired or debuts in an initial public offering – and shareholders can cash out.

Speaking with dozens of angel as well as early and midstage venture capital investors reveals a few common insights.

First, the cost of launching a company has gone down over the last decade. More than anything, say venture capitalists, that’s the reason the current tech investment climate feels more reasoned than it did during the late-’90s tech bubble. Advances in technology, as well as increased connectivity to the Internet through mobile devices, means companies can build products and acquire customers more efficiently, thus requiring smaller upfront investments.

For that reason, the local startup scene is dominated largely by funds of $50 million or smaller that are willing to make six- or low-seven-figure bets on early stage companies.

Trying to figure out exactly which companies are worth those investments brings up another piece of shared wisdom: It all comes down to the entrepreneurs.

“We’re trying to pick up on this innate ability to make something out of nothing and succeeding where they have no business doing so,” said David Travers of Santa Monica firm Rustic Canyon Partners. “There are lots of other aspects, but that alchemy in a person and in the team is key.”

Those “other aspects” are the quantifiable ones – the size of the market a company is going after, the success (or failures) of competitors in the field and the cost of building up a customer base.

But the people managing venture capital funds continue to base their primary investment decision on the skill a startup’s founder has in leading a project and bringing other people on board with his or her vision.

“The No. 1 pattern is successful repeat entrepreneurs,” Settle said. “We’re looking at teams that are working together again, even if it’s in a slightly different area.”

The relationship between a venture capital investor and a startup is more than just fund and recipient. Beyond the equity stake, firms that make a sizable investment in a young company take on advisory roles, with many holding positions on the board.

“As major investors it takes a lot of our time; we have to sneak out of meetings to take calls as board members,” said GRP’s Suster. “We don’t get involved unless we have a meaningful enough stake.”

As Los Angeles begins to emerge as a viable scene worthy of investor interest, it also has to deal with a dearth of larger, late-stage funding.

Unlike Silicon Valley, which is replete with funds that might figure into the billions, Los Angeles is still a small-ball market. No local fund is larger than $250 million. Occasionally, a company such as JustFab or SnapChat can command venture interest from outside the area, but most initial funding comes from local capital.

There is hope among venture capitalists that a local business could hit it big, with venture capital riding on its coattails. It’s happened before; Chicago’s Groupon Inc. virtually invented the area’s tech boom once the company became a multibillion-dollar, if beleaguered, public company in 2011.

That belief is what turns people such as Lilling into the new mentors, and funders, of the area’s tech foundlings.

“There is a give-before-you-get mentality in L.A.,” Lilling said, “You need to build the pie before you split it up. We’re in pie-building mode. It’s one of the best parts of the job right now.”