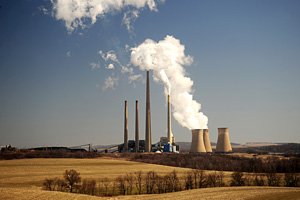 The Rosemead company’s power generation subsidiary, Edison Mission Energy, plans to file for bankruptcy protection unless bondholders quickly agree to restructure $3.7 billion in debt at plants in the Midwest and East.

Closer to home, the Southern California Edison utility subsidiary is facing up to several hundred million dollars in costs to fix the idled San Onofre nuclear plant in northern San Diego County, which shut down in January after a leak. Edison wants to pass the cost of repairs and other expenses to ratepayers, but consumer advocates want Edison to pay.

Also, SCE is awaiting word from the state Public Utilities Commission on how much of its request for a $1.5 billion, three-year rate increase will be granted. If the commission doesn’t back the full rate-hike request, Edison shareholders will likely see lower-than-expected returns for the next three years.

Despite all that, one analyst believes the company’s shares are still a good buy.

“Edison International’s stock offers an attractively priced claim on one of the most profitable, fastest growing and best regulated utilities in the United States,” wrote Hugh Wynne, senior analyst at Bernstein Research in New York, in an Aug. 13 report.

The most pressing issue is the huge debt at Edison Mission, although its resolution could lift a burden from the parent company.

Edison Mission owns 45 power plants throughout the United States, including seven aging coal plants in Illinois and Pennsylvania that have been pummeled in recent years by a double whammy of low natural gas prices and huge plant retrofit costs. Edison Mission has $3.2 billion in debt coming due over the next couple of years, including $500 million in unsecured debt due in June.

But since then, natural gas prices have fallen to 30- and 40-year lows, prompting utilities to switch from coal. Edison Mission’s coal-fired plants, with their fixed maintenance and coal delivery costs, could not offer prices as low as those from gas-fired plants. They went into the red and stayed there.

What’s more, Edison Mission needs to spend more than $850 million on environmental retrofits at its five Midwestern plants over the next six years to comply with tightening federal and state environmental regulations.

Edison Mission is shutting down two coal-fired plants in the Chicago area and parent company Edison has already taken a $640 million write-down on those plants and another nearby plant. The company is also in the midst of transitioning the operation of the Homer City plant to majority owner GE Capital. But Edison Mission has notes coming due on two other plants, in two Illinois cities, Joliet and Powerton.

“Should we be unsuccessful in negotiating a debt restructuring adequate to stabilize Edison Mission Energy as part of Edison International … then EME would need to be reorganized under new ownership,” he said.

Most analysts following Edison are expecting bankruptcy. Dave Katz and Bayina Batsheva, J.P. Morgan utilities analysts, wrote in an Aug. 2 report that Edison Mission bondholders could recover more than 54 cents on the dollar should the unit file for bankruptcy protection.

But Edison shouldn’t be hurt by the Edison Mission bankruptcy, other analysts said. That’s because Edison Mission was set up 20 years ago with its own capital structure and debt-issuing capacity. As a result, Edison Mission’s debt is effectively quarantined.

“The creditors can only count on the assets of Edison Mission Energy as collateral; they cannot have recourse to the corporate parent/holding company,” Wynne at Bernstein Research wrote in his report.

As a result, Wynne did not factor in Edison Mission’s troubles when rating Edison stock a “buy” last month. He said that once Edison Mission’s debt is restructured – either through an agreement with bondholders or sale to a third party or bankruptcy – the unit’s negative cash flow and earnings would likely cease dragging down Edison’s earnings. Even if a bankruptcy results in write-downs from the sale or closure of plants, those write-downs will likely result in one-time hits to earnings.

But the troubles at San Onofre could have a substantial impact on Edison’s bottom line that could hurt shareholders.

Southern California Edison, the regulated utility that owns 85 percent of the San Onofre Nuclear Generating Station, shut down the plant Jan. 31 after a small radioactive leak. Tests revealed that hundreds of tubes were wearing out much faster than expected.

Through June, the cost of repairs tallied $48 million, while Southern California Edison shelled out $117 million to procure replacement energy.

Edison executives have said there’s no timetable for when – or even if – both of the reactors will resume operations. The estimated cost of returning the reactors to minimal levels is tens of millions of dollars. If more extensive work is needed, that could go to more than $500 million.

If the company must pay the costs, SCE’s insurance policy should cover most of the money. But whatever is left over would come out of earnings and that would directly impact shareholders. However, if the company is allowed to pass the costs to the ratepayers, shareholders wouldn’t lose money. The state Public Utilities Commission is expected to rule on this by the end of the year.

What’s more, if the most problematic reactor is not restarted, it could be removed from SCE’s rate base, according to Ali Agha, analyst with SunTrust Robinson Humphrey in New York. That could result in an annual earnings loss of roughly 10 cents a share.

Edison last month announced it would lay off 730 workers at the plant, nearly one-third the total.

Investors are also casting a wary eye on the PUC’s consideration of SCE’s request for a $1.5 billion rate increase over the next three years. Much of the increase is for maintenance of the utility’s grid and to defray the higher costs of renewable power in dozens of power purchase contracts.

But the PUC’s ratepayer advocate and other ratepayer advocates are pushing for a rate increase closer to $1 billion over the next three years. The lower rate increase figure would mean that more of Edison’s fixed maintenance costs and power purchase contracts would be pushed on to shareholders, reducing earnings. That could result in a 5 percent to 10 percent hit to the company’s earnings per share.

“The projected rate base growth would be affected by the outcomes of these rate proceedings, posing risk for SCE’s earnings,” said Bernstein Research’s Wynne.