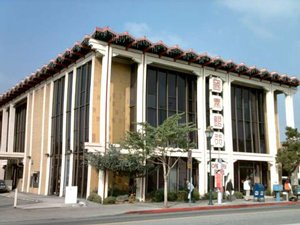 A landmark decision by U.S. banking regulators this month to allow three Chinese banks to expand in the United States could lead to considerable change at some of L.A.’s largest lenders.

For one thing, the move could lead to increased competition for the local institutions catering to the Chinese-American community, including East West Bank in Pasadena and Cathay Bank in downtown Los Angeles. For another, analysts believe state-backed Chinese institutions may attempt to acquire those local banks.

“This could spur more M&A speculation among the regional banks, particularly the Chinese-American banks, and East West and Cathay would theoretically be the most logical targets,” said Joseph Morford, an analyst with RBC Capital Markets Corp. in San Francisco.

An East West spokeswoman said the bank wouldn’t discuss the issue and Cathay did not return calls.

Investors apparently aren’t expecting any quick takeover offers, however; the stocks of both local Chinese-American banks have moved little since the announcement.

Earlier this month, the Federal Reserve approved Industrial & Commercial Bank of China Ltd.’s acquisition of the U.S. subsidiary of Bank of East Asia Ltd. The subsidiary is headquartered in New York but has five branches in Los Angeles County. With the approval, ICBC became the first Chinese lender to buy a majority stake in a U.S. bank.

Observers called the ICBC decision a watershed moment for financial relations between the two countries and said it will allow Chinese banks to pursue a more aggressive growth strategy in the United States. It was also the first time a Chinese bank had been granted holding company status over a U.S. banking network, which will make it easier for ICBC to make additional acquisitions in this country.

“All the major state-owned Chinese banks will look to have some sort of presence here,” Morford said. “Over time, they’d like to have much bigger footprints here in the states and the obvious way to grow that is through acquisition.”

The Bank of East Asia acquisition by ICBC, China’s largest bank, took a year to clear regulatory hurdles. ICBC, which is majority owned by the Chinese government, announced the deal to buy an 80 percent stake in Bank of East Asia’s U.S. operations in January 2011.

U.S. regulators are often slow to approve expansion plans for foreign state-owned financial institutions. Part of that reluctance is due to concerns about the role played by the government in the banks’ operations, said Walt Mix, a director with Berkeley Research Group LLC in Los Angeles and the former commissioner of the California Department of Financial Institutions. Additionally, “the quality of the financial supervision in the home country may not be up to U.S. standards.”

Mix called the Fed’s decision “precedent setting” and said it will likely open the door for additional Chinese banks to enter the United States.

Large U.S. banks such as Wells Fargo & Co. have become more active in the Chinese-American banking niche in recent years at the same time that specialized lenders such as East West have grown significantly. Now, with an expected influx of foreign banks, the space is only expected to get more crowded.

“It’s natural that there would be increased competition,” said Gary Tenner, an analyst with D.A. Davidson & Co. in Lake Oswego, Ore.

According to the 2010 U.S. census, more than 470,000 Chinese-Americans live in the greater L.A. metropolitan area, making it the third largest such community in the country; New York and San Francisco are bigger.

East West, with $21.7 billion in assets, and Cathay, with $10.6 billion, are the nation’s largest Chinese-American banks. Los Angeles is also home to other small lenders in the niche, including Preferred Bank.

Tenner said Cathay is the likeliest acquisition target because it has sufficient size to generate interest but can presumably be bought at a lower price than East West. The lower price could result from Cathay’s trouble with distressed loans. What’s more, succession issues at the bank could add pressure to the board to seriously consider any offer.

“Cathay might be getting closer to a point when they would entertain selling given the age of management and the board, and the lack of a clear succession plan,” Tenner said. “Cathay would probably lend itself much more naturally to being a takeover target.”

Even though such speculation has not had much effect on the banks’ stock prices, analysts are bullish: RBC Capital Markets recently upgraded its stock rating for both Cathay and East West to “outperform.”